Those of you who follow my personal life know that my day job is teaching and my subject areas are English, speech, and theatre.  One summer, I was lucky enough to take students on a trip to New York to see Broadway shows and experience the city.  Several area schools traveled together, and we had a blast.  It was certainly a whirlwind trip–we saw four shows in three days on top of sightseeing and attending some theatre classes with professionals.  This wasn’t my first trip to New York, however.  When I was sixteen, my family took a road trip that included two days in the city.  While we were there, we saw Gypsy with Tyne Daly.  Because of these trips, I can’t imagine visiting New York without taking in a Broadway show. 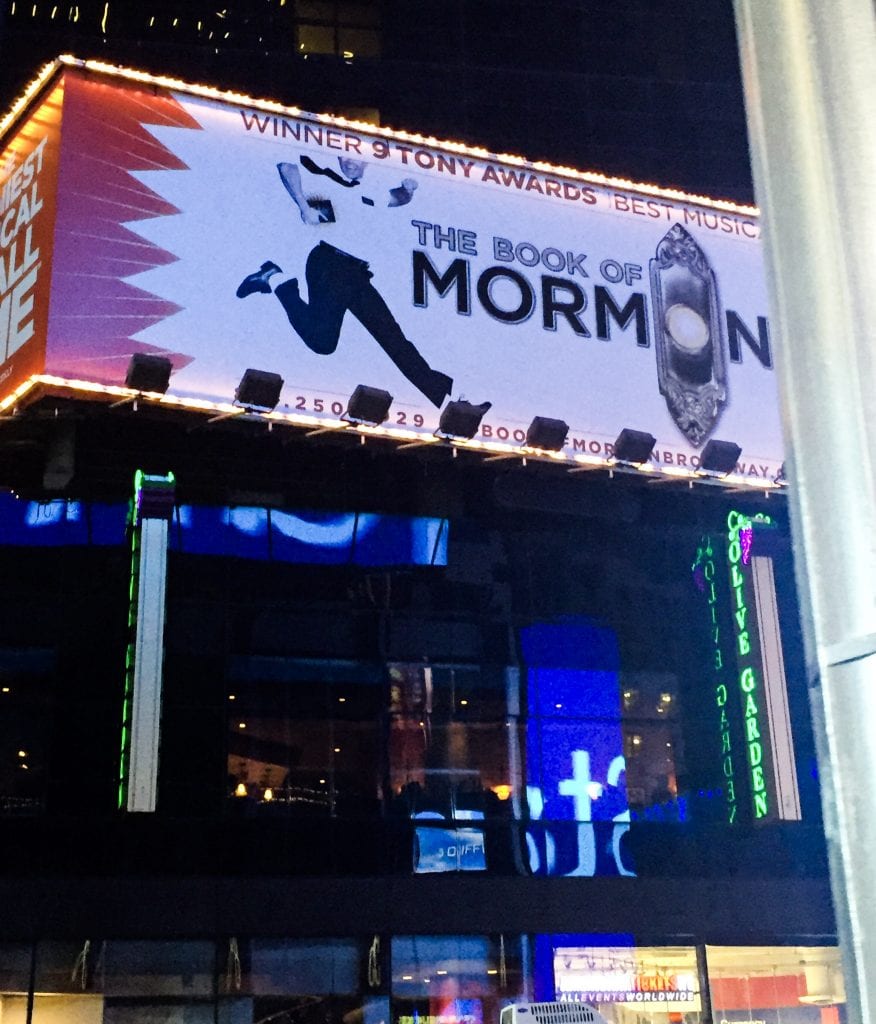 There’s something magical about Broadway. If you’re not sure about how you’d feel about seeing a show, I’d recommend giving it a shot because there’s a little something for everyone.  When I visited with my students, we saw four very different shows–a nice sampling of the diversity of Broadway.  Each made me think about the issues we face in life in new ways.  Studies show that people who view and participate in theatre are more empathetic towards others; this alone makes theatre valuable.  But seeing a show is also fun! Attending a Broadway show contributes to having the complete New York experience.  Here are five reasons a Broadway show should be on your itinerary.

Contents
1 1. You’ll experience a slice of American pop culture.
2 2. You’ll get to see the inside of a beautiful theater.
3 3. After an evening show, you’ll have the opportunity to see Times Square at night.
4 4. You could choose to see one of your favorite stories live onstage.
5 5. You’ll see a performance that is likely one of the best in the world!
6 Getting Tickets to a Broadway Show in New York
7 Don’t Forget the Broadway Souvenirs! 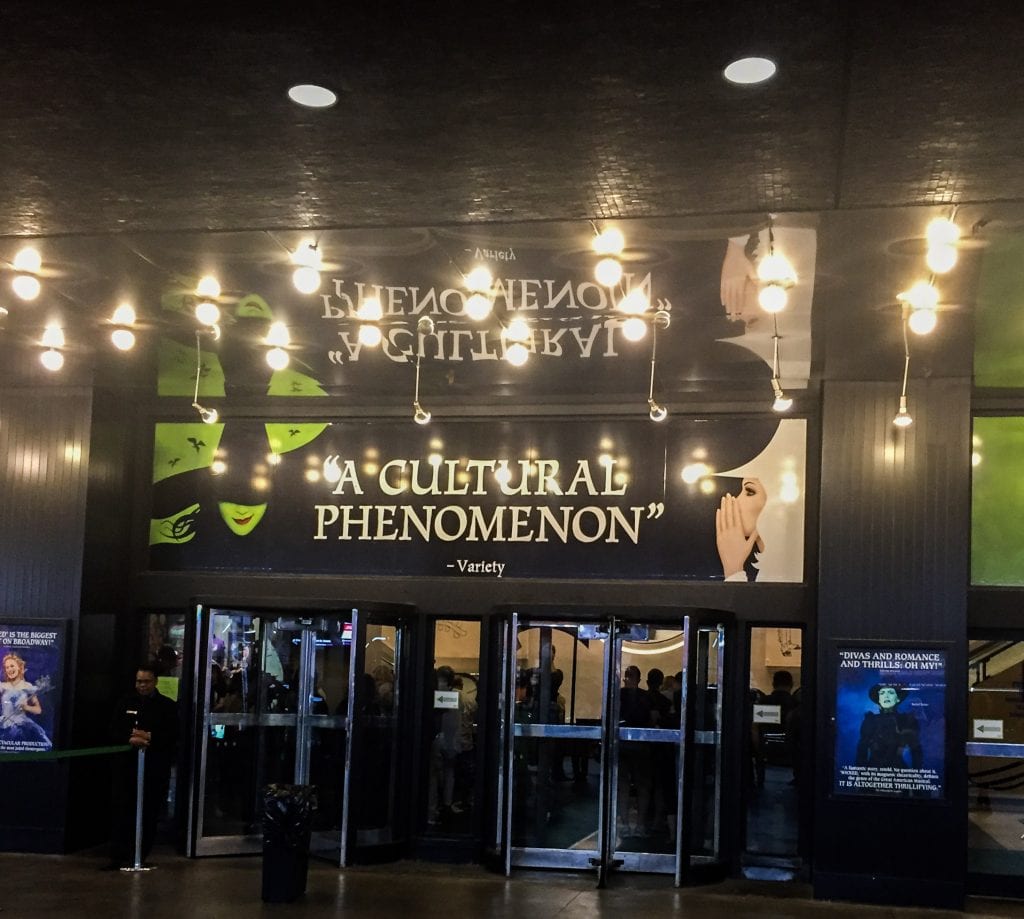 For many shows, the only way you’ll get to experience them is to see a live production, especially when they first come out.  If the show is popular, it could be a couple of years before a tour happens.  Seeing a show on Broadway gives you access to stories that become part of American pop culture. 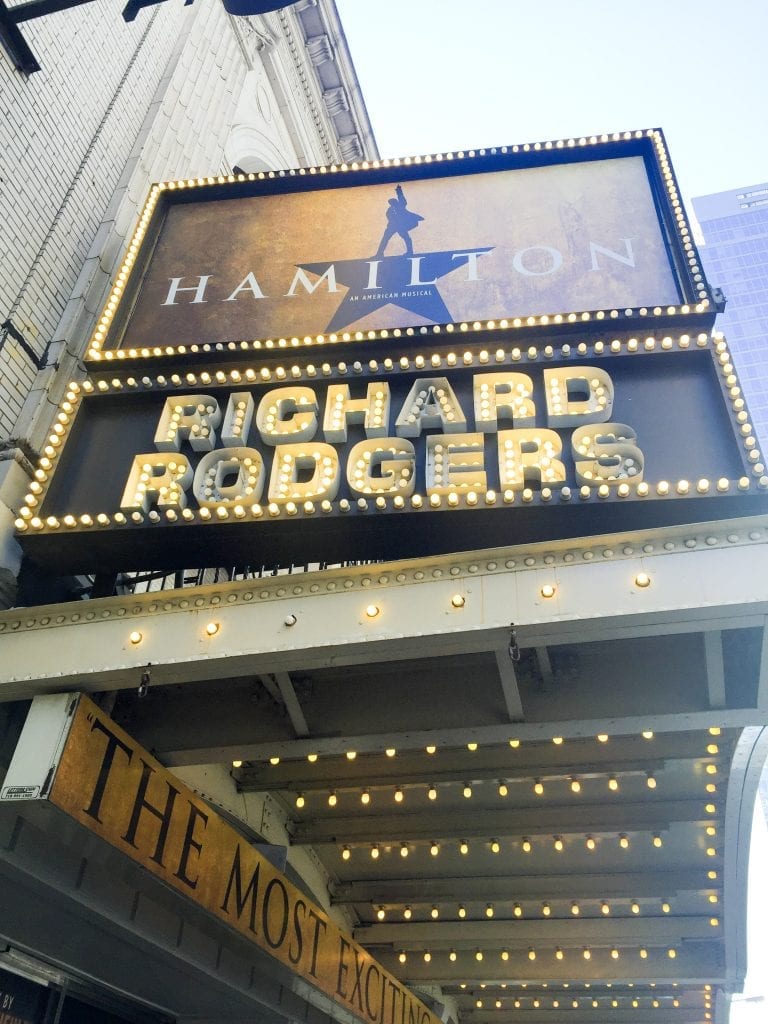 Wicked and Hamilton are two shows that have been extremely successful and popular.  For now, the only way to truly experience the shows are by attending live performances.  Luckily, we can see a performance of these shows by official touring companies.  However, neither show is available for amateur licensing, so you won’t see these performed by your local community theatre anytime soon.  But before the tour starts, Broadway, and sometimes London’s West End, is your best bet. 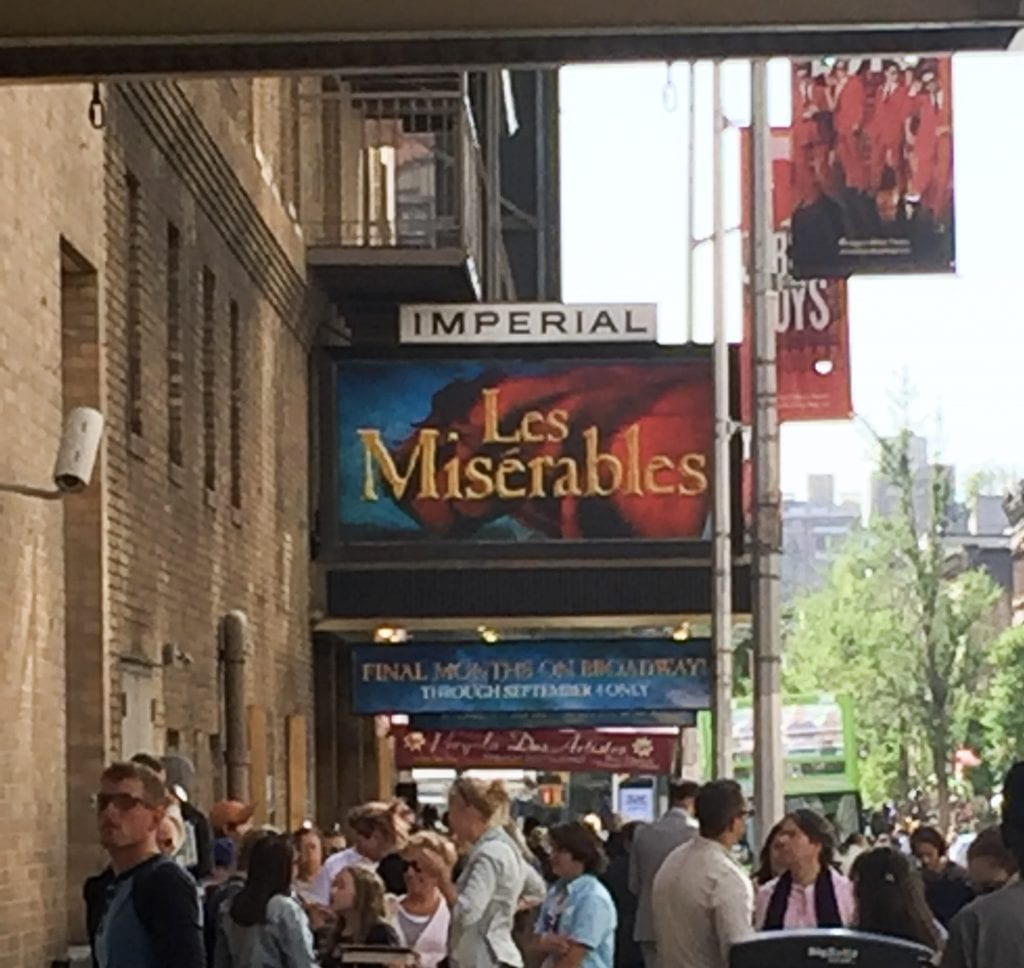 2.  You’ll get to see the inside of a beautiful theater. 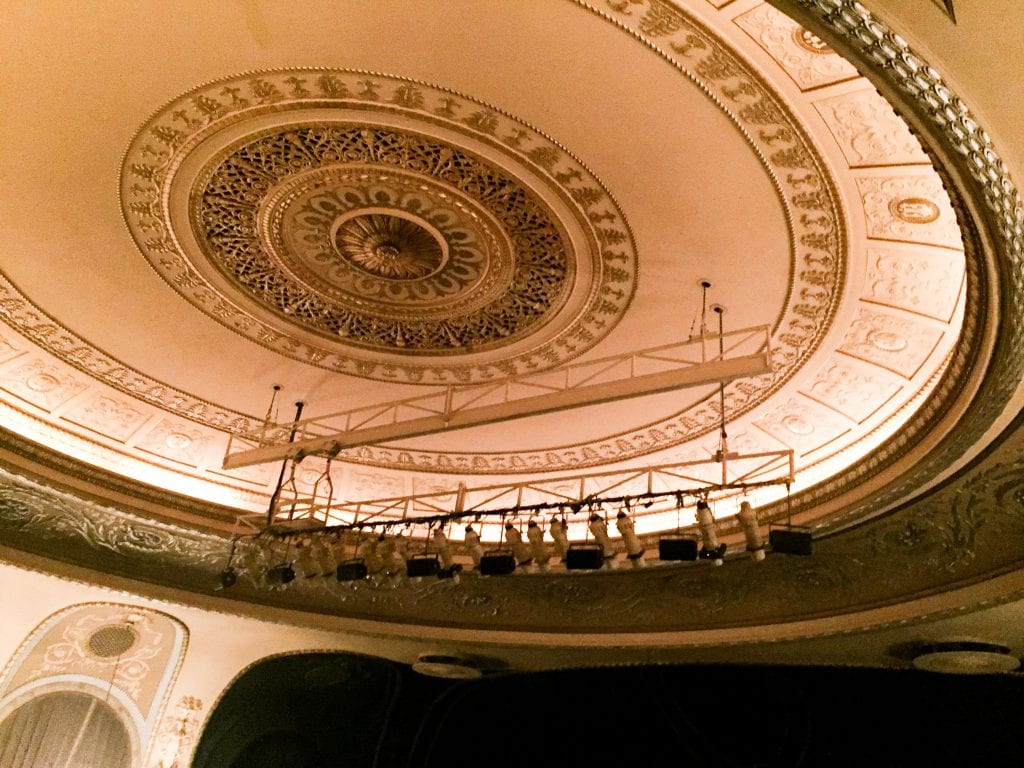 During the trip with the students, we saw many great examples of the diversity of the architecture of the theaters.  The pictures directly above and below are of the Majestic Theater, home of Phantom of the Opera. 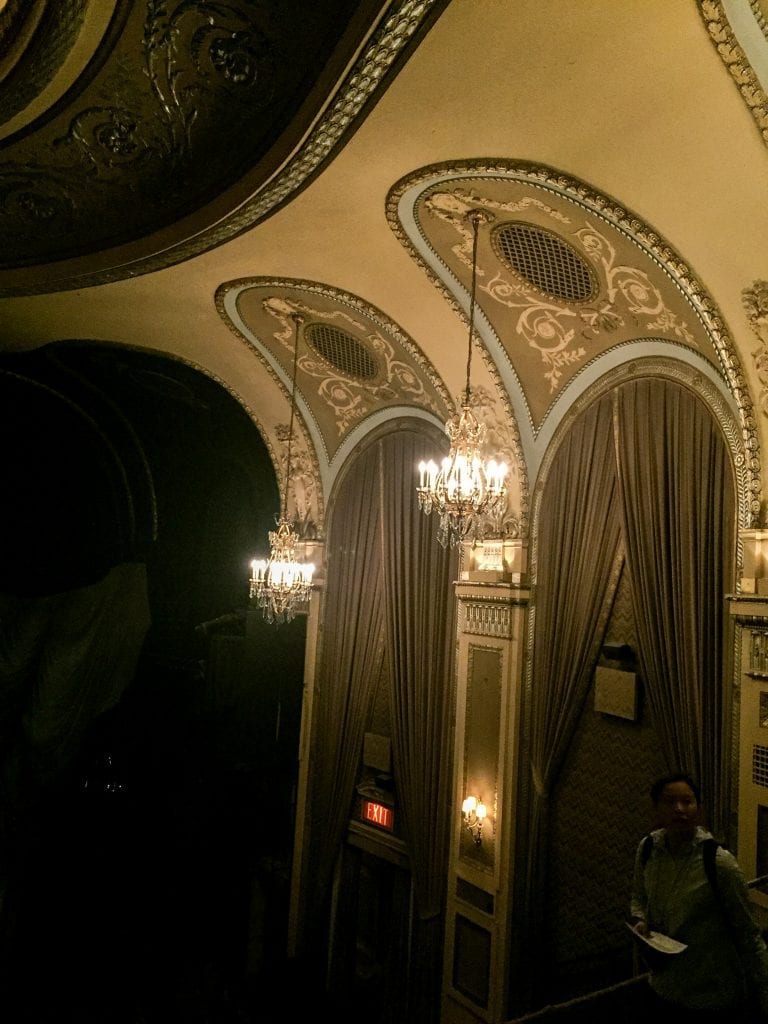 The pictures below show the beauty of the Al Hirschfeld Theatre. 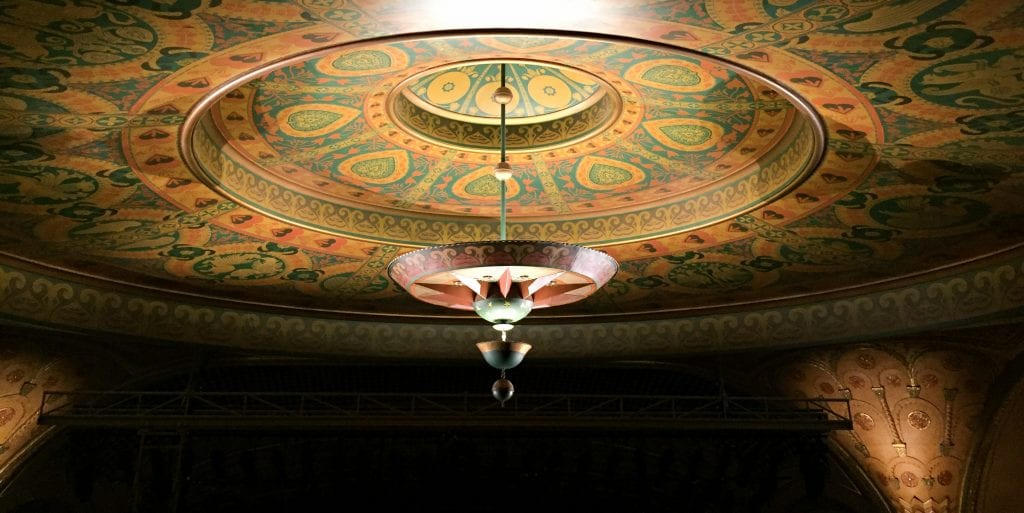 At the time of our trip, Kinky Boots was playing here.  Currently, it’s home to Moulin Rouge! The Musical. 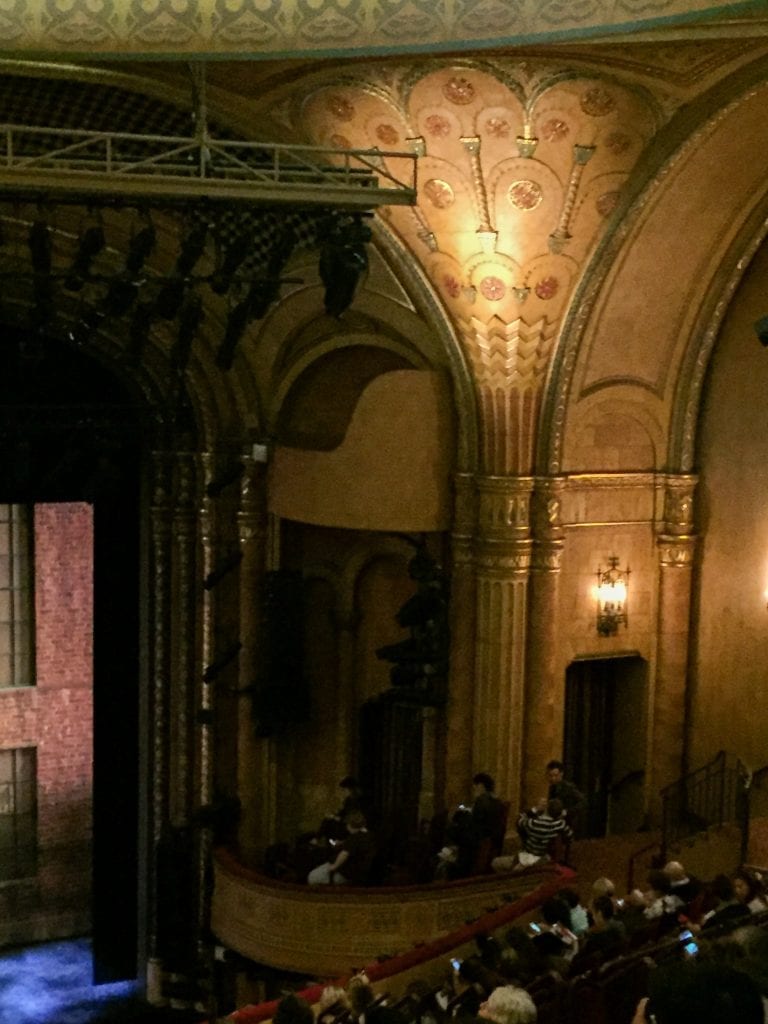 The Gershwin Theater, home to Wicked, and the Minskoff Theatre, home to The Lion King, display a more contemporary style. The spaces are still beautiful. 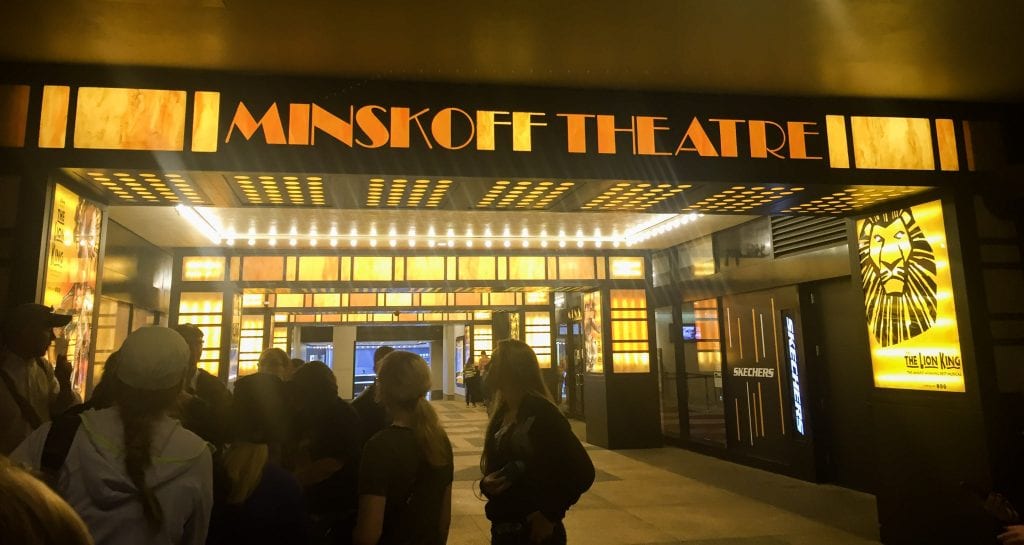 3.  After an evening show, you’ll have the opportunity to see Times Square at night.

This may not be a highlight on everyone’s list.  In fact, I believe locals and frequent visitors avoid Times Square.  But I think this is one of those places that everyone should see at least once to say that you have. 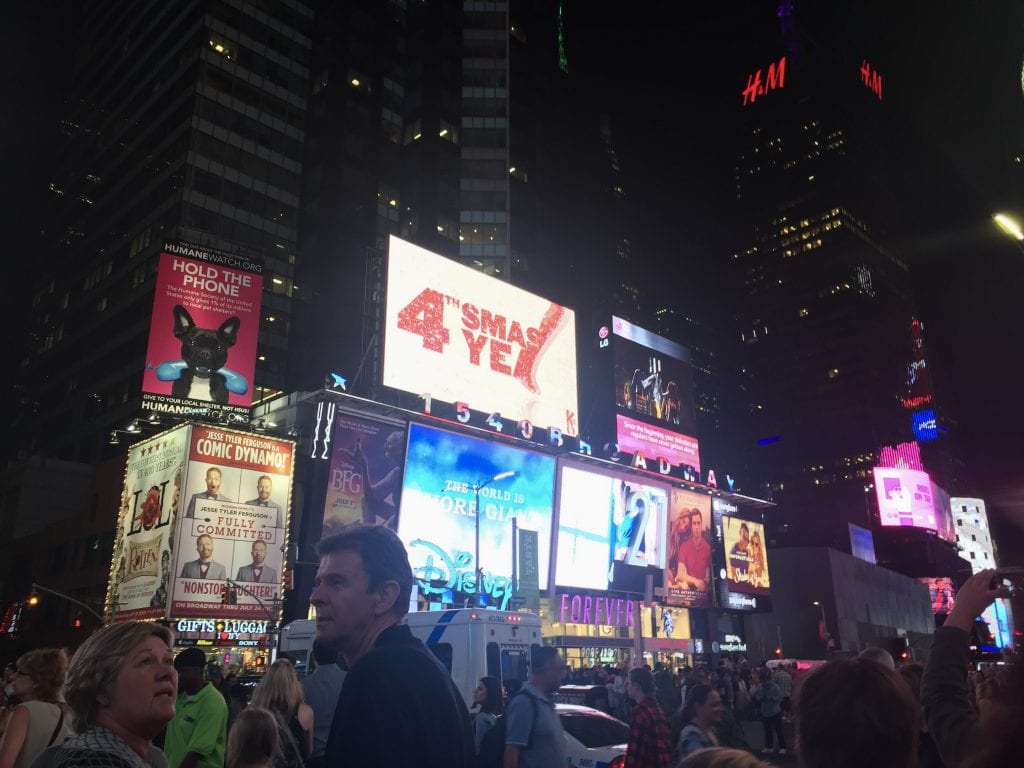 When the shows let out, depending on where you’re staying, it’s quite possible that you will be walking in the area.  We happened to be staying at the Holiday Inn Express at Times Square.  For every show we saw, we had a short walk back to our hotel afterward.  We walked in the Times Square area, and those walks are certainly in my memory!  I always felt safe; there were many people around and the police were visible.  Just use general caution and be aware of your surroundings.

4. You could choose to see one of your favorite stories live onstage. 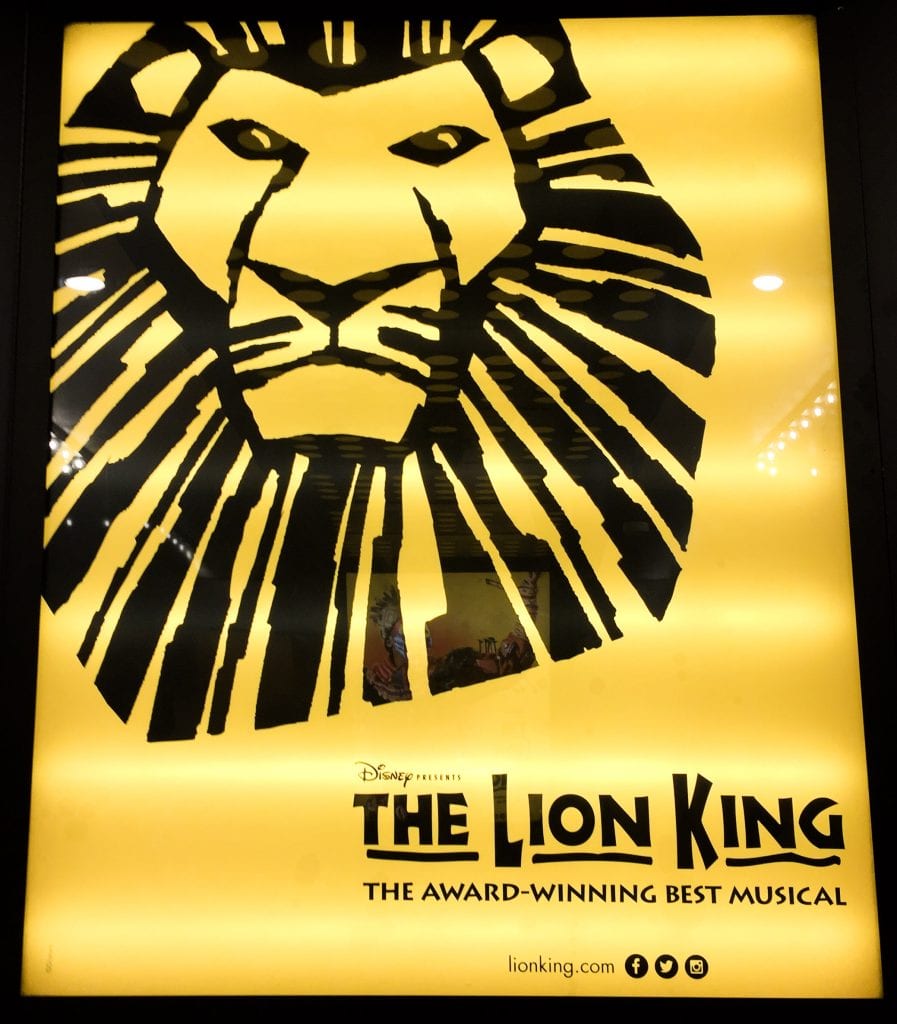 In recent years, many shows have been adapted from films, especially Disney films.  If you are a fan of one of these films, you will probably love the Broadway show version. As audience members in The Lion King, we were in awe as the show happened all around us.  The costumes and dancing were amazing!  Yes, the films are wonderful, but there’s something extra special about seeing it live.

5.  You’ll see a performance that is likely one of the best in the world! 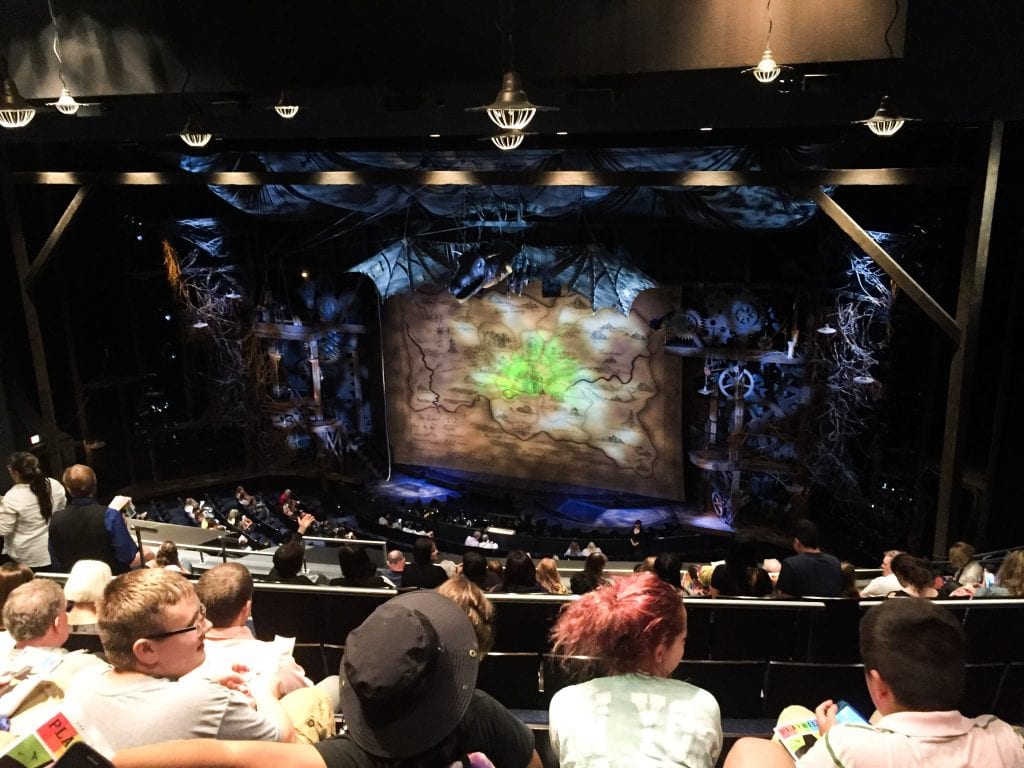 Yes, occasionally shows on Broadway flop.  But if you do some research ahead of time, you’ll know which shows would be enjoyable for you, especially if you aren’t able to get tickets for the most popular shows.  Remember, my family picked Gypsy without any knowledge about the show.  Luckily, it was great! But reading up a little couldn’t hurt.

For the most part, you can assume that what you see on Broadway will be top-notch.  You can also look at how long a show has been running to help you make your choice.  After all, popular shows are popular for a reason!  Even after running for several years, Wicked (above) and Phantom of the Opera (below) still play to full theaters. 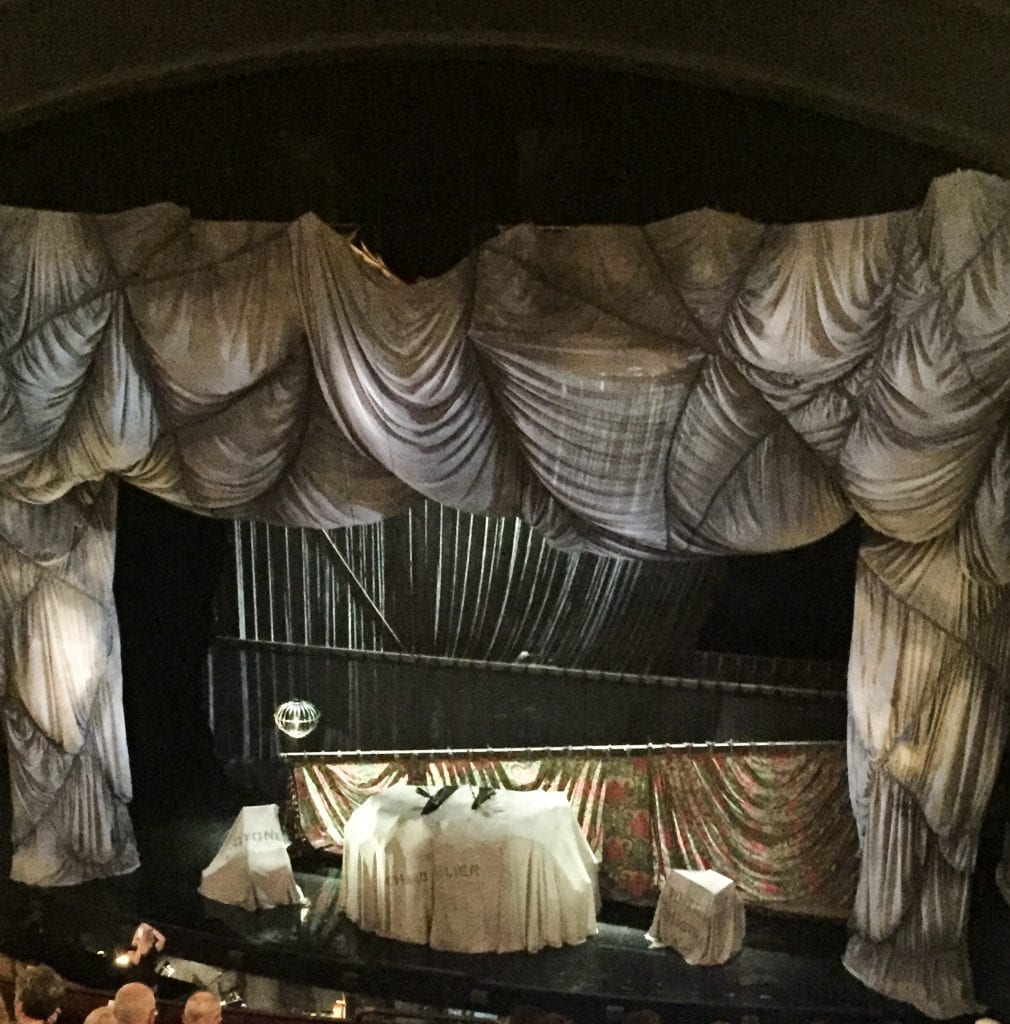 Getting Tickets to a Broadway Show in New York

If you’re looking to book a popular show or be certain that you have the seats you want on the day you want, you can book your tickets through Broadway.com.  You can’t go wrong with planning ahead and securing your seats before your trip.  If you are flexible, you may be able to purchase tickets to a show on the performance date at a TKTS booth.  These tickets could be discounted as much as 50% off.  You can purchase full-price tickets at the Times Square booth, as well.  When I saw Gypsy with my parents, we waited in line at the TKTS booth in Times Square on the morning we planned to see a show.  We had no idea what we wanted to see, and we had no idea what the show was about ahead of time.  It turned out to be a fun surprise at a great discount!

All of the theaters we attended had show-related merchandise.  I enjoyed purchasing a cup with a beverage that was themed to the shows we saw.  They had coffee cup-style lids, and I continue to use those cups at work.  My students like to look at them, too.  At Kinky Boots, I bought a t-shirt that has been a conversation-starter.  I bought the shirt at the show since the merchandise for the show wasn’t as visible in the basic souvenir shops like Phantom of the Opera or Wicked items were.

New York City’s Theatre District is a part of the history of the city.  When you see a show on the Great White Way, you can sense Broadway’s rich past as you take part in the tradition.  To truly experience New York, put a Broadway show on your itinerary.  You’ll always have the memories of the magic of Broadway!

Read about some of our other East Coast adventures: 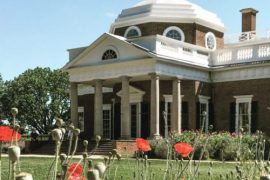 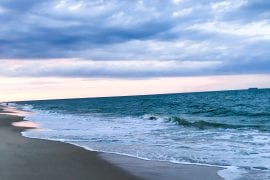 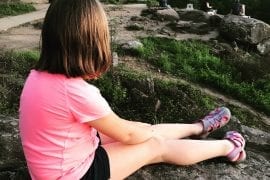 Battlefields, Ghosts, and Nachos: A Family Experience in Gettysburg