Since we live just a few miles away, we like to make an evening of checking out the Christmas decorations in Carthage, Missouri, every year. In the area’s rich past, American Indians and French settlers called this place home. After the Louisiana Purchase, Carthage became a city and the county seat of Jasper County. This historic city is perhaps most famous, however, for the Civil War; the Battle of Carthage was fought here, and some of the homes in the city date back to the 1870s when the residents rebuilt after the war. These Victorian-style houses are beautiful any time of year, but they are exceptionally magic at Christmastime.

If you are into Route 66 and its history, you’ll also find remnants of the highway’s past. In the mid-1970s, Vietnamese-American Catholics established their American monastery in Carthage; it’s now known as the Congregation of the Mother of the Redeemer. Every year, the monastery hosts Marian Days, attracting visitors across the country. At Christmastime, they host a great Christmas display.

It’s not surprising, then, that Carthage draws visitors for many reasons throughout the year. I can’t think of a better reason to explore Carthage than to see the decorations and get my Christmas spirit on. Christmas in Carthage should not be missed! 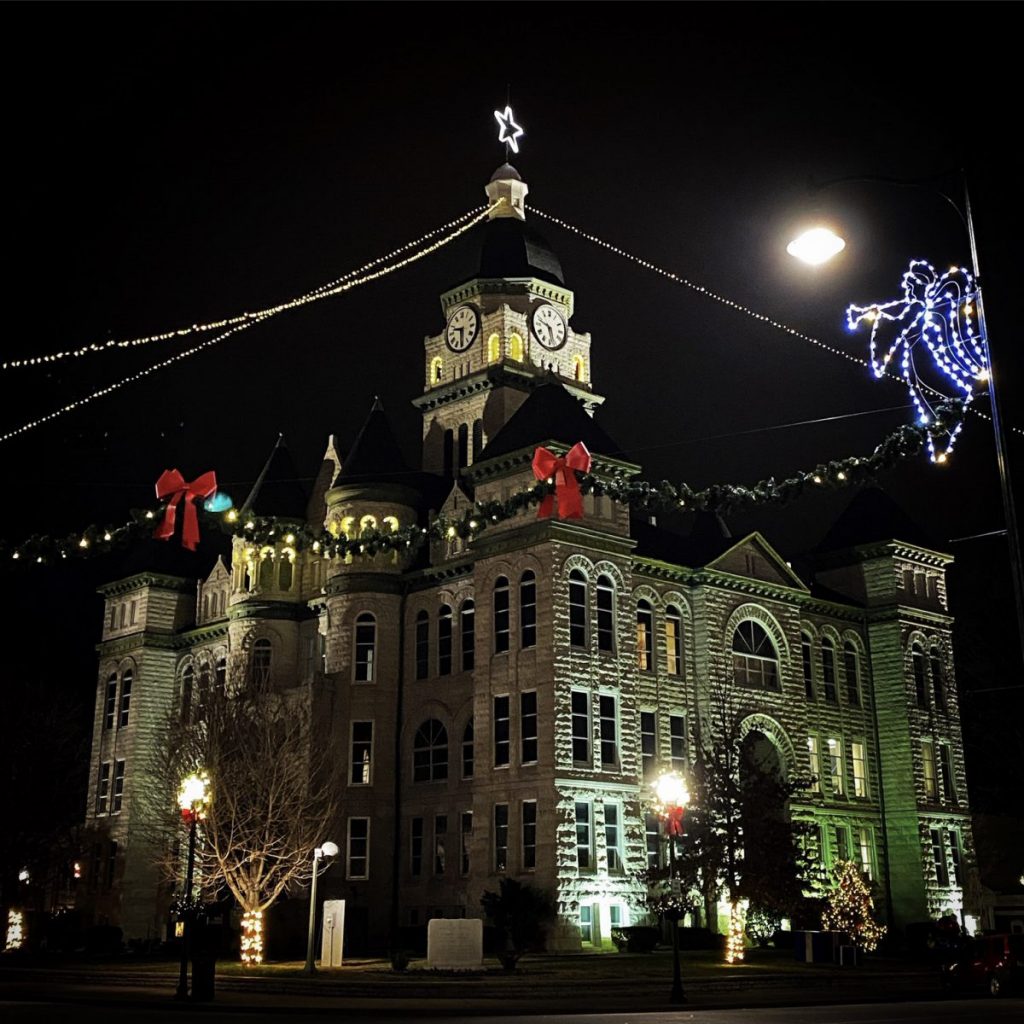 This courthouse is a must-see anytime, but when it’s decked out for Christmas, it can’t be missed.  You can see the star from blocks away. If you’re unsure how to get to the courthouse, just follow the star.

If you get a chance to visit during the day, take a peek inside. You may be able to snag a ride on the antique elevator. The square is also nicely decorated for Christmas. You’ll feel like you’ve stepped back in time. 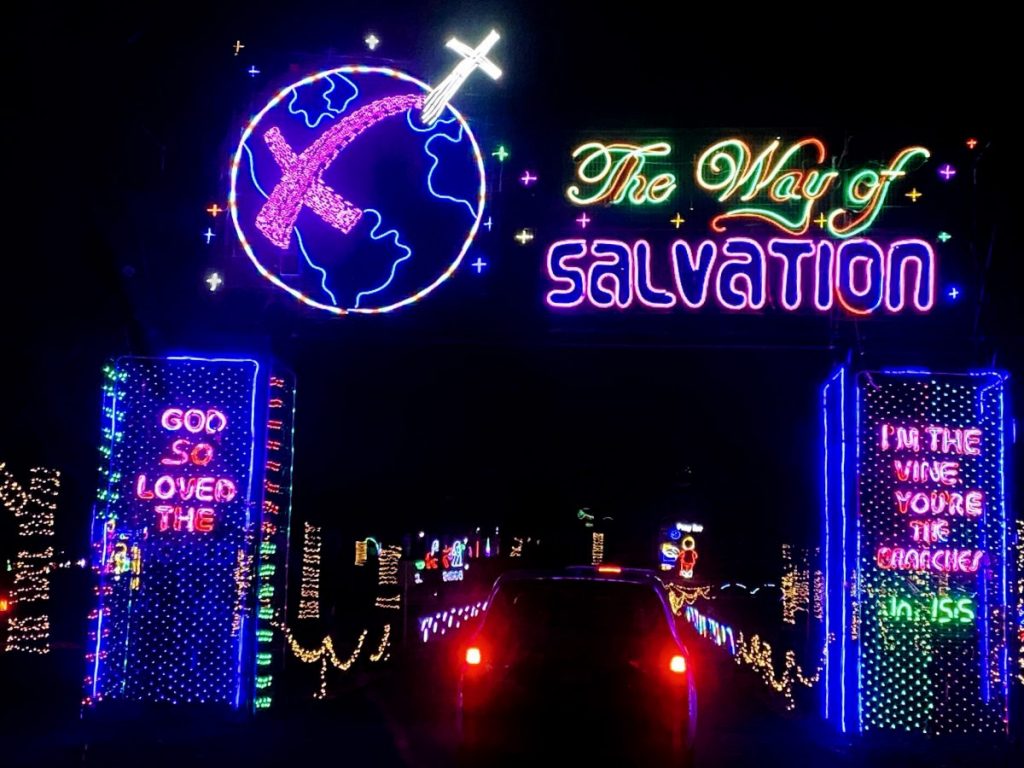 Built and hosted by the Congregation of the Mother of the Redeemer, this awesome drive-thought light display depicts scenes from the Old Testament through the birth of Christ, all from the comfort of your car. Turn on your car’s radio to listen to the music and messages as you drive through this wonderland of lights. 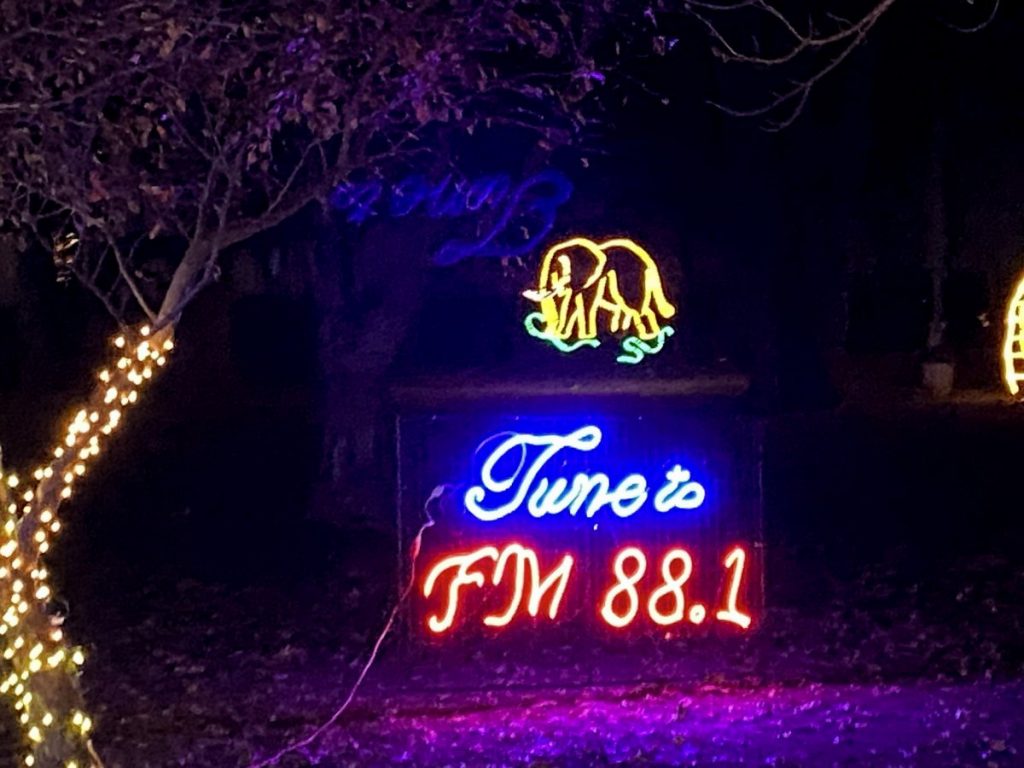 Here is Moses in the bullrushes.

You’ll wind around the campus as you take in the beautiful light installations. 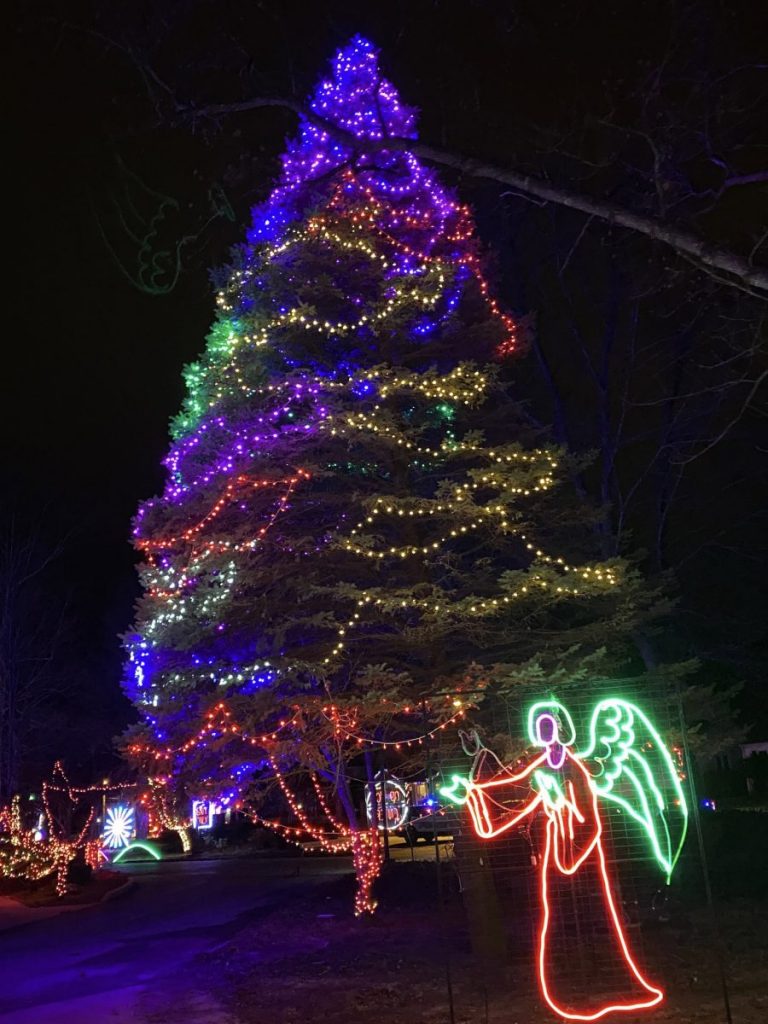 Towards the end, you’ll see the lights around the Our Lady of Refugees statue. 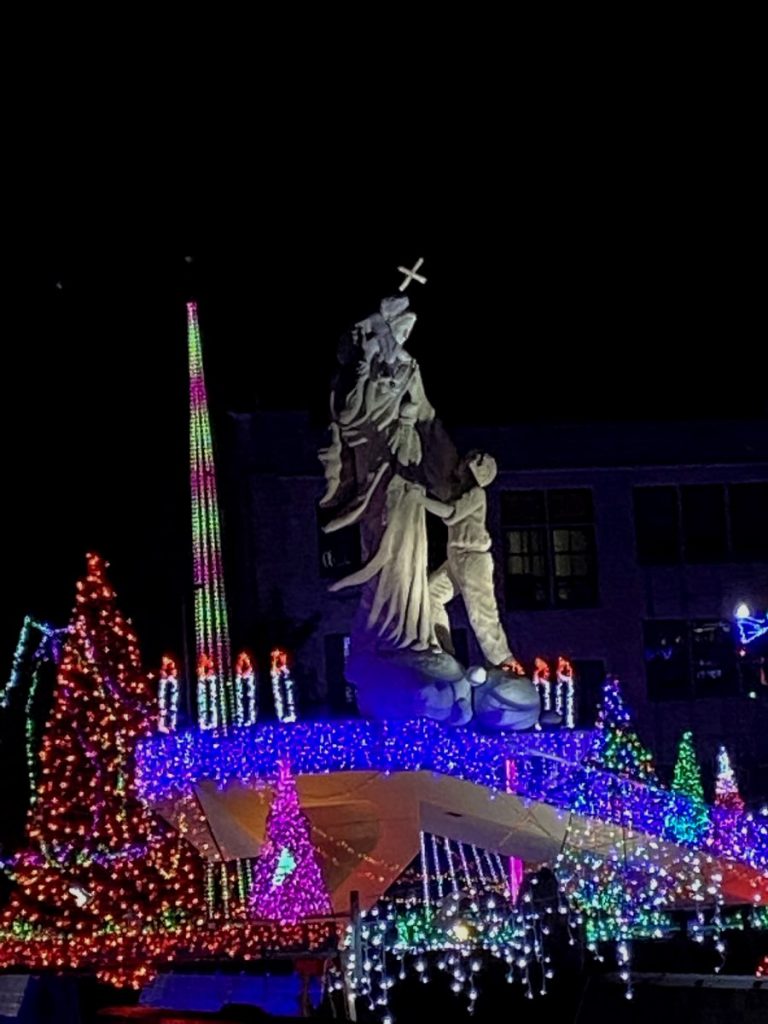 You’ll also see the nativity. Roll your windows down for this one. Trust me. 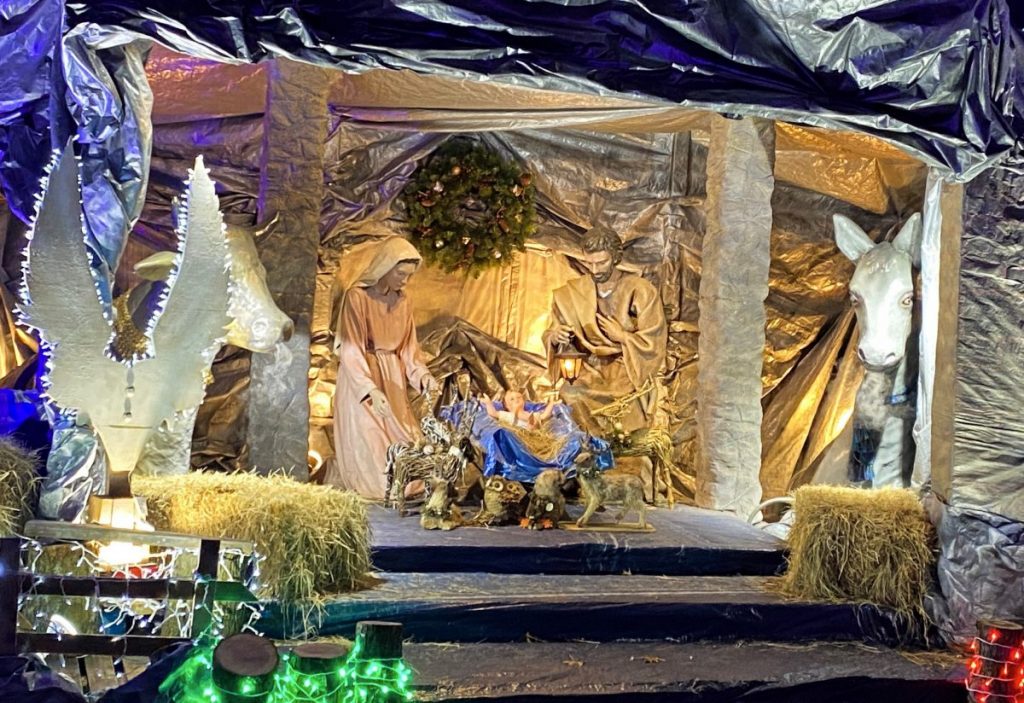 As the display comes to a close, you’ll pass the chapel. Touring the display is free, but donations are welcome. The display is open most evenings in December until 10:00 p.m. You can check the Carthage Chamber of Commerce for current information. 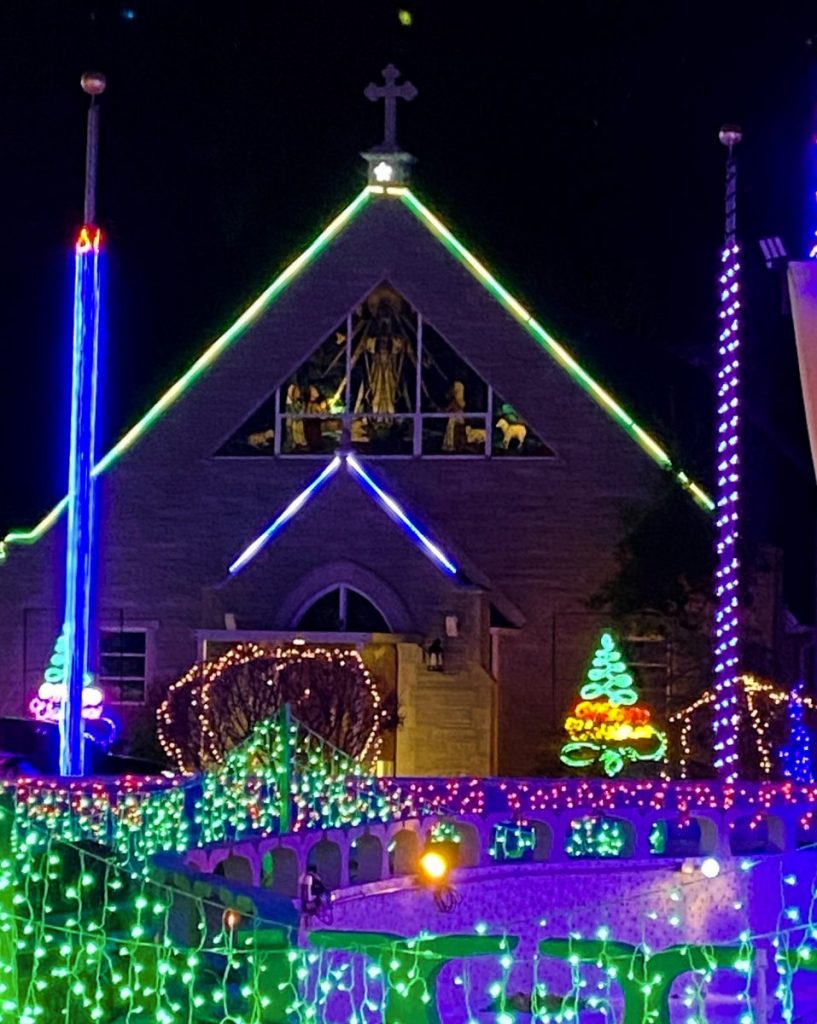 After the light display, we like to explore Carthage. As I mentioned previously, you can’t go wrong when visiting the historic homes, but I like to see them at Christmas. Most do not have elaborate modern decorations. Instead, they look closer to how they may have looked in generations past.

I’m not saying they aren’t using electricity or stringing up the lights, but it’s more subdued than some light displays. I can use my imagination as to how the homes may have looked in the 1890s.

Also of note–every other year, the Chamber of Commerce hosts a home tour with tea. 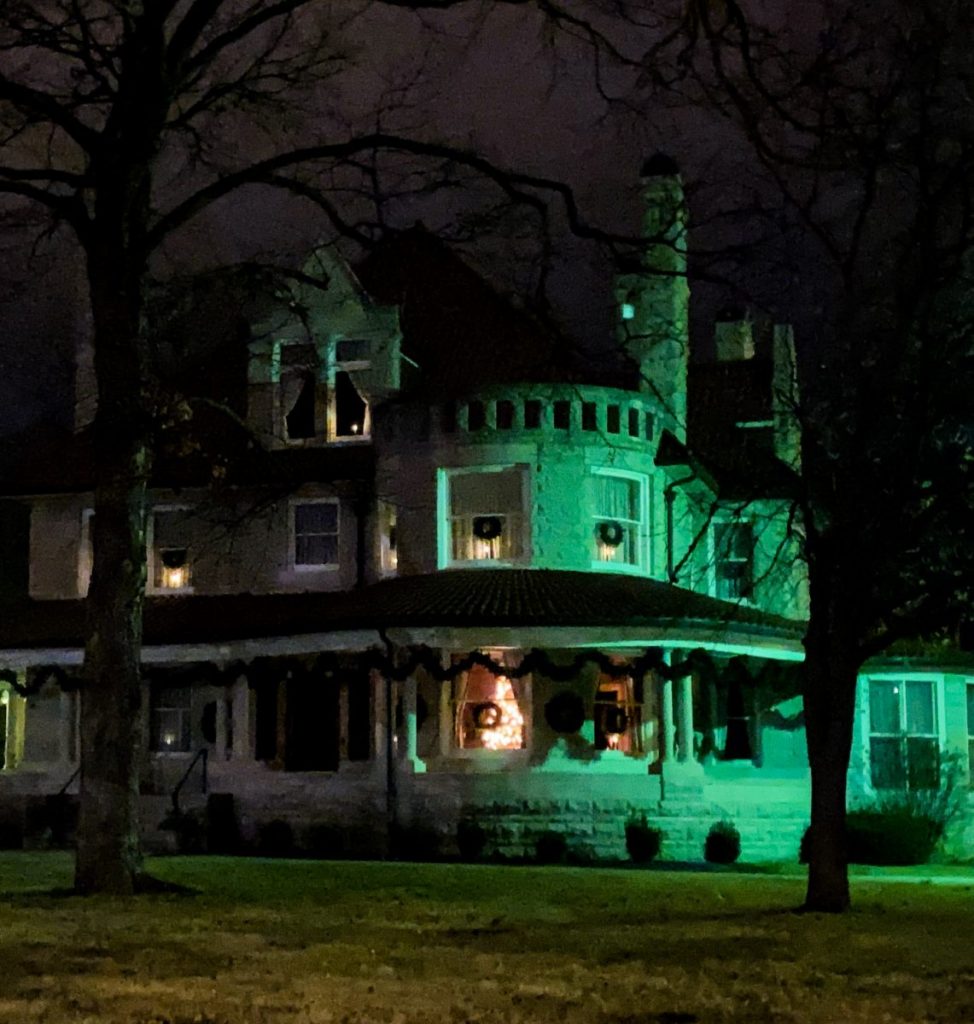 According to Carthage Historic Preservation, Colonel William H. Phelps designed this home on Grand Avenue. Though he didn’t serve in the military, he earned his title as a Democratic Party boss. He began as a lawyer on the square in Carthage, and later he was elected as a Missouri Representative and the Missouri Senate. The home is built from stone and marble from the area, and his influence enabled the capitol building in Jefferson City to be built from marble in Carthage. Nowadays, the home may be rented for special events.

I love the wreaths and garland on this one. Beautiful, indeed. 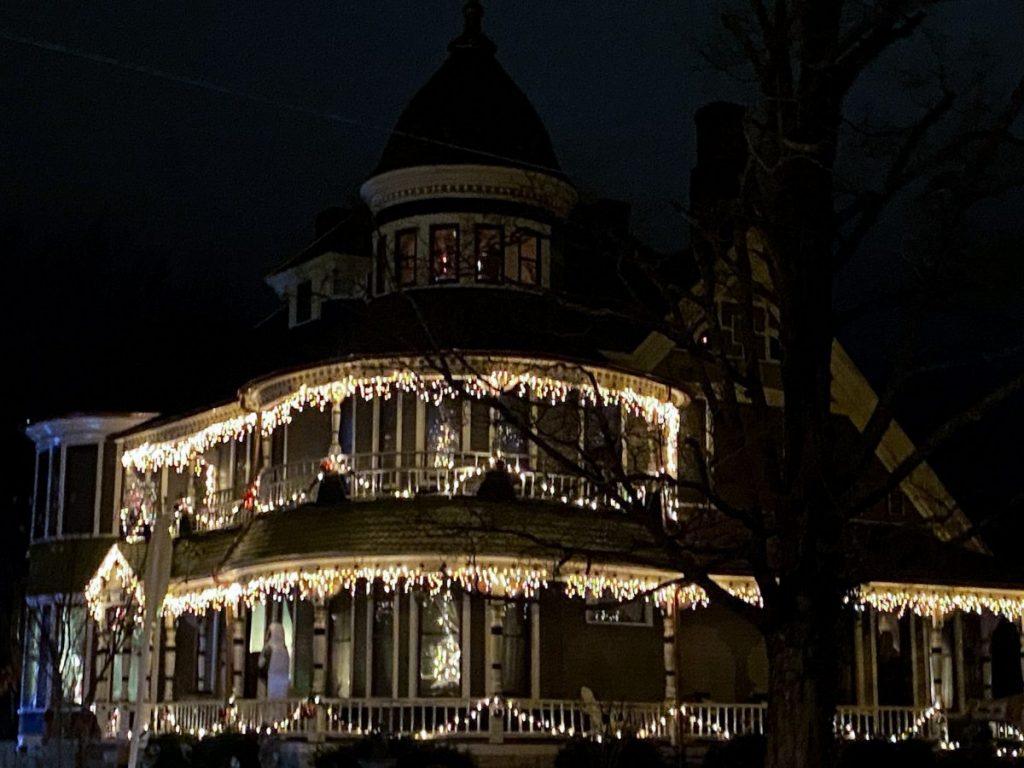 According to the Joplin Globe, Baker was a farmer who owned a mine north of Carthage. He also founded the town’s Methodist church. The article also states that he invented a rocking chair that would fan you as you rocked. The house was divided into apartments at one point, but restoration efforts over the years by various owners have returned the home to its historic splendor. The current owners, the Thorn family, continue to restore the home. They have also restored two other residences in Carthage. 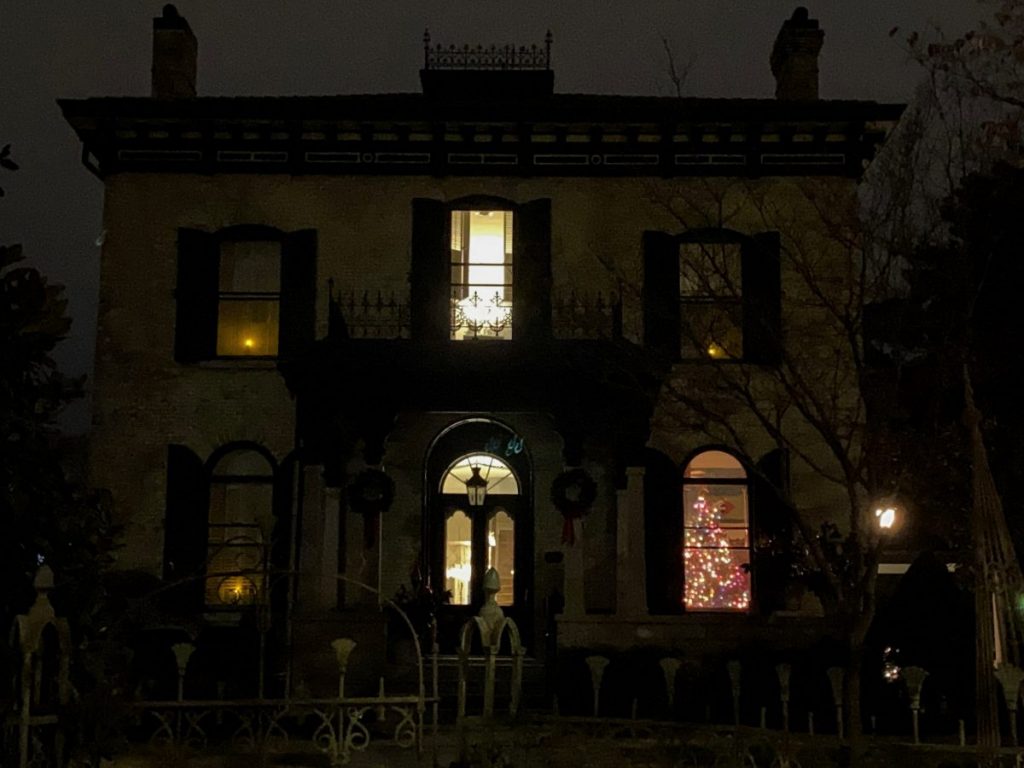 The house also has an interesting story. According to this Joplin Globe article, the house is named for the man who built it, Clinton Spencer. Spencer was a sheriff who is believed to have embezzled money to fund it, and he may have used inmates from the local jail to build it. If that’s not crazy enough, the lawyer who became the next owner, James F. Hardin, tried to kill another lawyer, William H. Phelps, by shooting him during a court proceeding. Phelps survived, but Hardin was killed a couple of months later. Here’s what’s really interesting: these houses are across the street from each other. 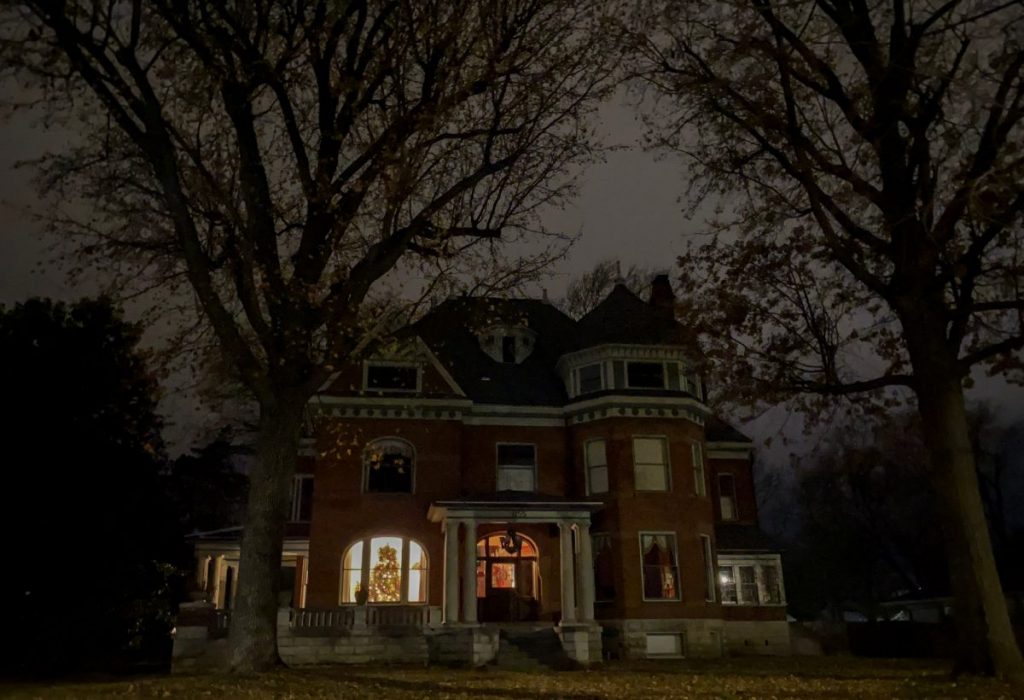 According to information submitted to Find-a-Grave, Henry Clay Cowgill was a flour miller who eventually went into business with Frank Hill. Over the years, Cowgill had several mills in the area. Cowgill and Hill also were involved in zinc mining. Eventually, Cowgill also served as the vice president of the Bank of Carthage.

The above is just a small sampling of historic homes in Carthage. You could spend a lot of time searching out these homes and learning about them. Actually, I had a great time digging up whatever information I could find about these beautiful houses, and I’m inspired to learn more. I’m keeping my eyes and ears open for the future for tours and other special events, and I’m also hoping to learn more about the Civil War history right in my own backyard.

If you do come to Carthage to see the Way of Salvation light display, I hope you do take some time to explore the rest of the city. Christmas in Carthage is guaranteed to put you in the Christmas spirit!

Looking for more holiday fun in the area? Click here to read about Christmas in Branson, Missouri.