At Halloween, some families go trick-or-treating. Some have parties or scary movie marathons. This year, our family decided to do a ghost tour in a nearby city–Springfield, Missouri. And where do you go for a ghost tour in Springfield? Why, the Pythian Castle, of course!

This wasn’t our family’s first ghost tour. The ghost tour at the Pythian Castle made number 7 for us. What can I say? We like our history tours with a dash of the supernatural. To read about other ghost tours we’ve taken, click the links below.

Gettysburg (post has a section on the Jennie Wade House)

What is the Pythian Castle? A Brief History

The Pythian Castle has a surprising history. In 1913, the fraternal order, The Knights of Pythias, built the castle as a home for widows and children of members and for members who needed a place to retire. Though the castle was an answer to prayers by those in need, children who stayed in the castle were separated by gender, even if they were siblings. The castle was also the meeting place for members to conduct meetings.

During World War II, the Pythian Castle was used by the military as a place for soldiers to recuperate after being wounded. The castle had many areas to keep the soldiers occupied, like a ballroom, movie theatre, and bowling alley. In the basement, German, Italian, and Japanese prisoners of war were interrogated and incarcerated.

After the war, the Army Reserves acquired the property until it was sold in 1993. The building is now privately owned and serves as a residence. The castle is also available for weddings, proms, and other events. The owners now host ghost tours and investigations, princess balls, murder mystery dinners, and escape rooms as well as special holiday events.  In 2017, Ghost Adventures filmed an investigation on the premises that aired that November.

Arriving at the Pythian Castle 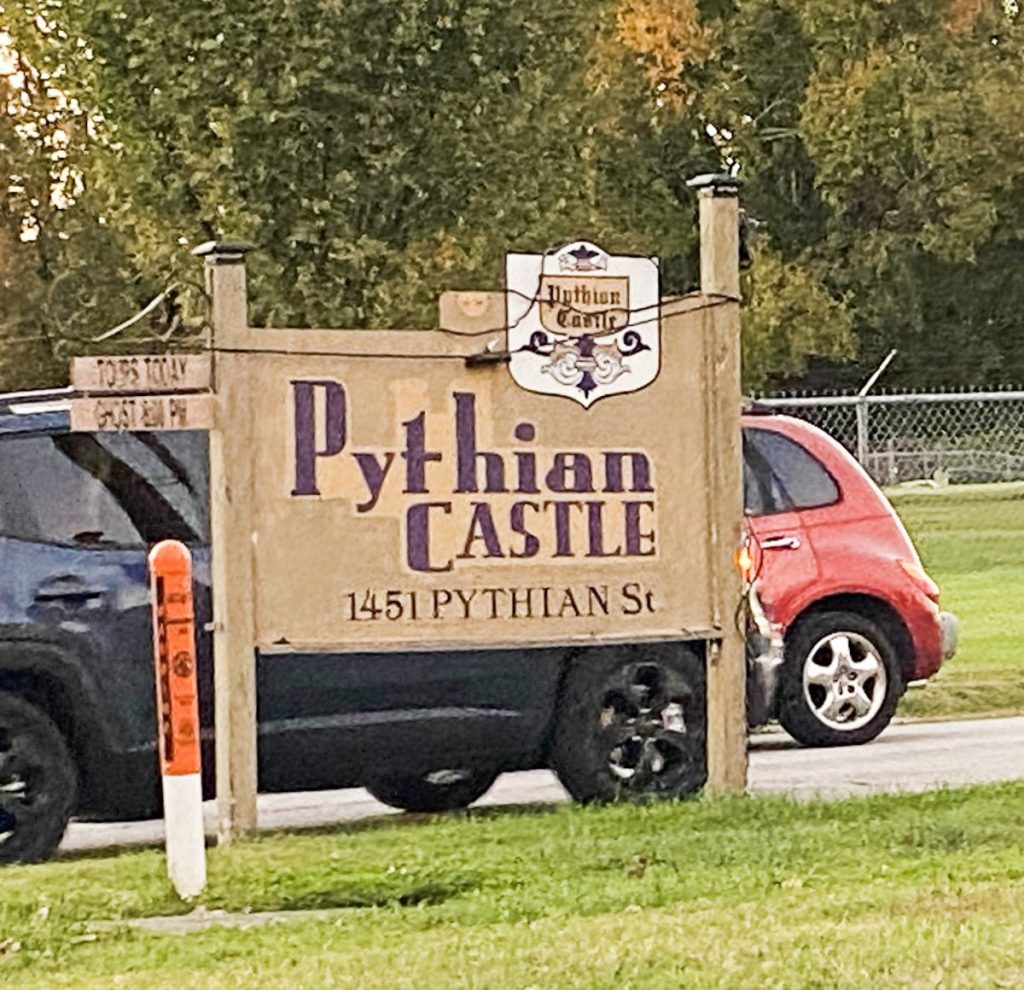 Once we decided to do the ghost tour, we went to the Pythian Castle website to purchase our tickets and reserve our time. If you purchase online, you may save a dollar per ticket. Though it’s their busiest time of year, they still had tour openings for our date on the day of. Be sure to check the website.

We arrived in Springfield about thirty minutes before our tour. It’s worth noting that they won’t let you in the driveway until 15 minutes before your scheduled tour. You’ll need to be able to pull up your tickets to show them at that time. You may want to screenshot your confirmation.

We drove around the area a bit and returned at the appointed time. After we were verified as ticketholders, we were able to drive up to the castle. You can then get out of your car and take exterior pictures. Our guide greeted us as soon as we pulled in. We were then able to walk around the grounds at the front of the castle and explore the front porch. 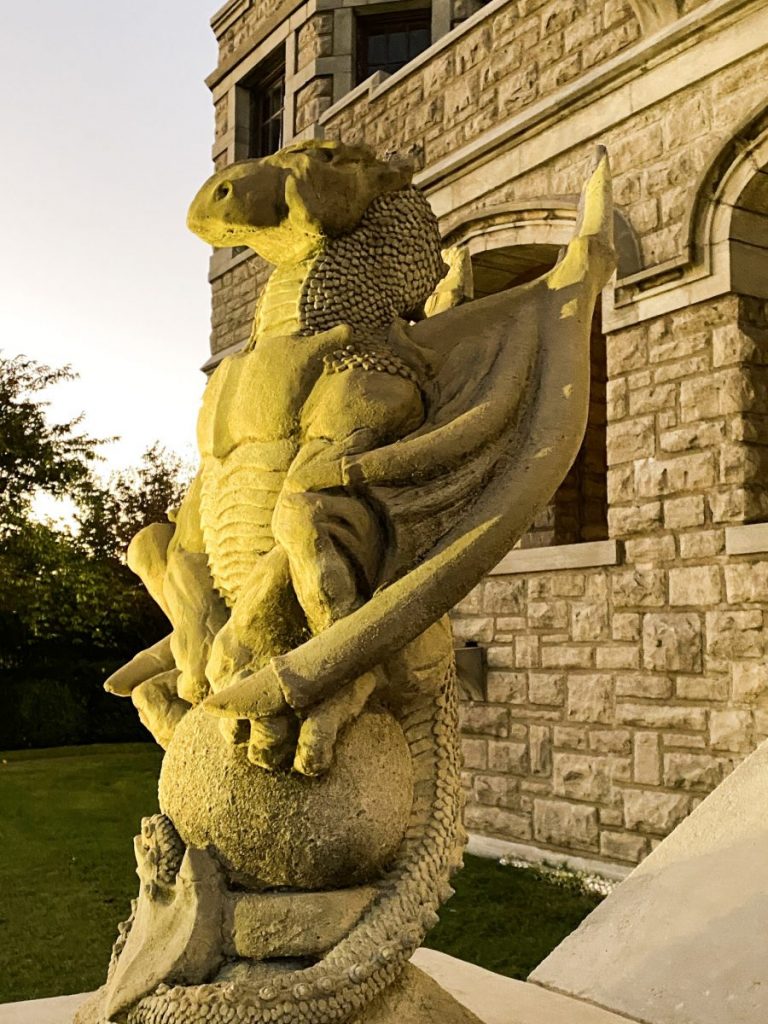 Be sure to check out all the fun details. 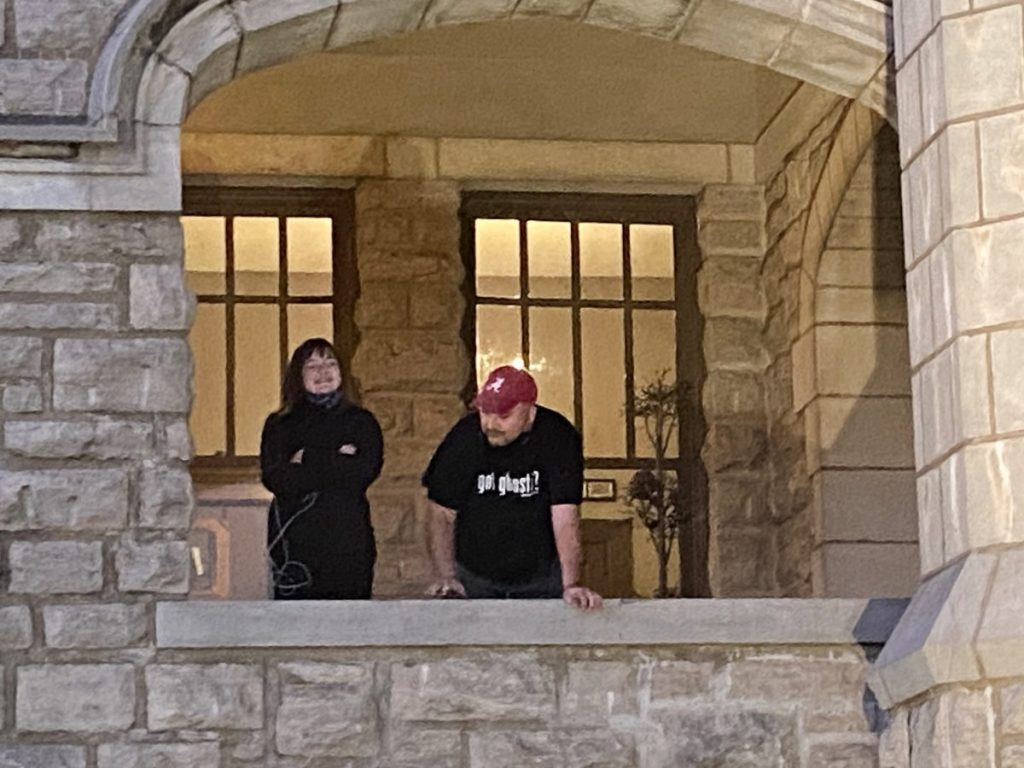 You will note that the castle is decorated for Halloween. Even though they offer year-round ghost tours and can show you their paranormal evidence that they’ve captured, they have a good time leaning into the Halloween fun.

They also host medieval events throughout the year, so the traditional castle décor is also prevalent. They even have a fire-breathing dragon figure on the porch! Well, it breaths “smoke,” anyway. 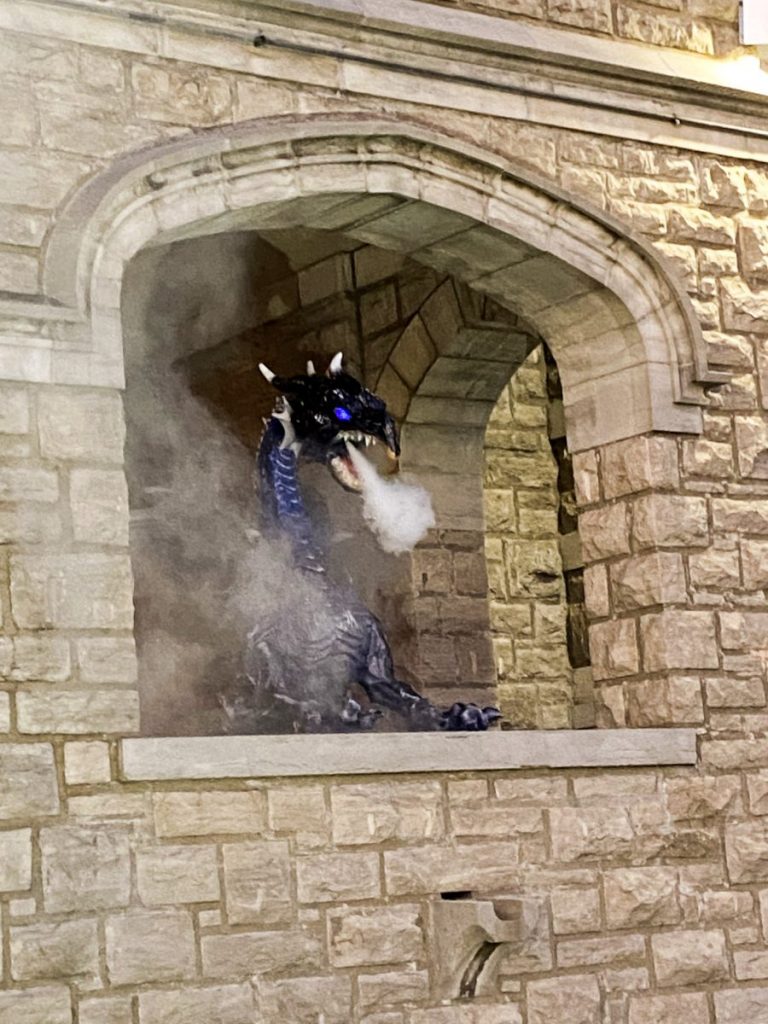 It makes for a fun photo op! 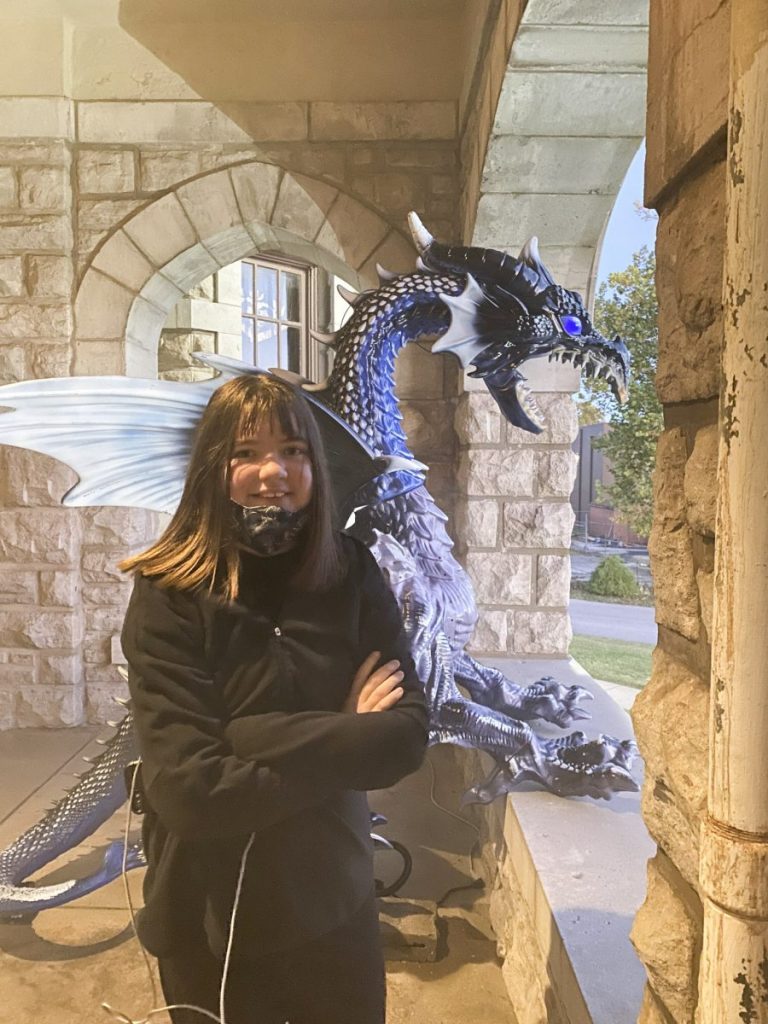 Soon, it was time to go inside. 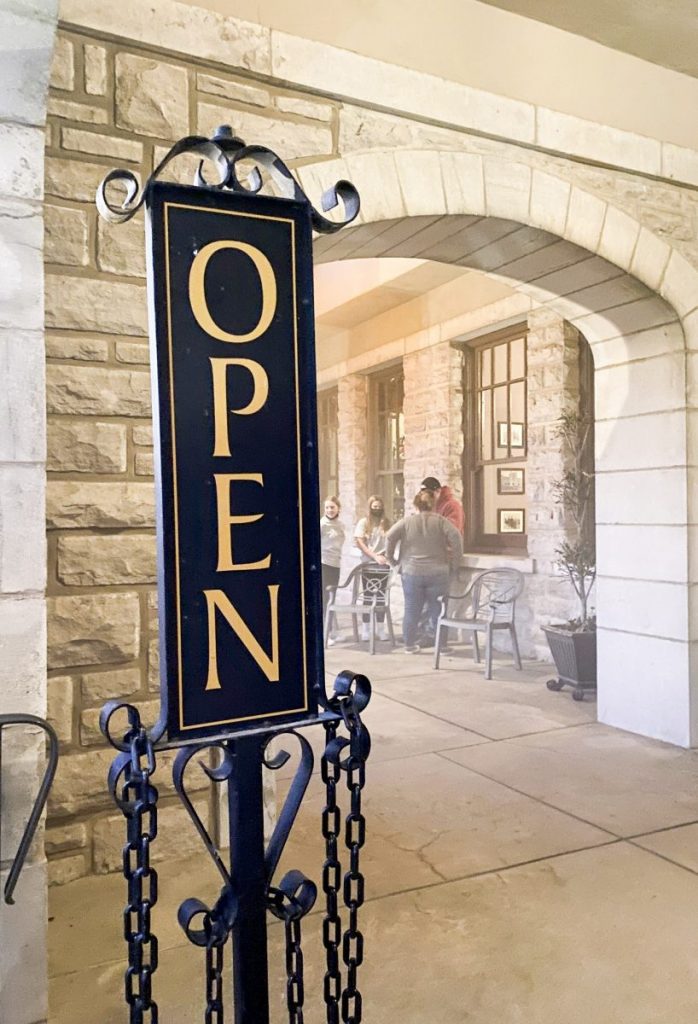 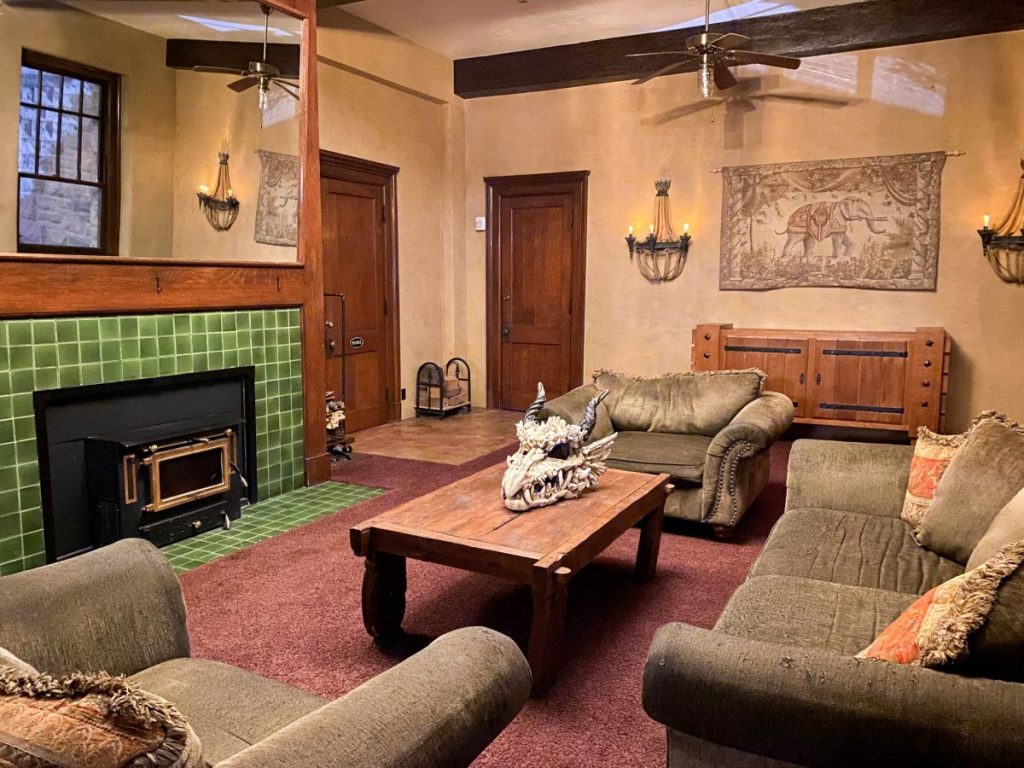 A few minutes before the tour is to begin, guests are let inside the castle. To the right of the door is a cozy waiting areas. Gotta love the dragon skull.

To the left is a gift shop area. On the table with the Halloween tree are photo albums of historic pictures and photos of possibly paranormal anomalies. It’s not a bad way to pass the time before the tour. 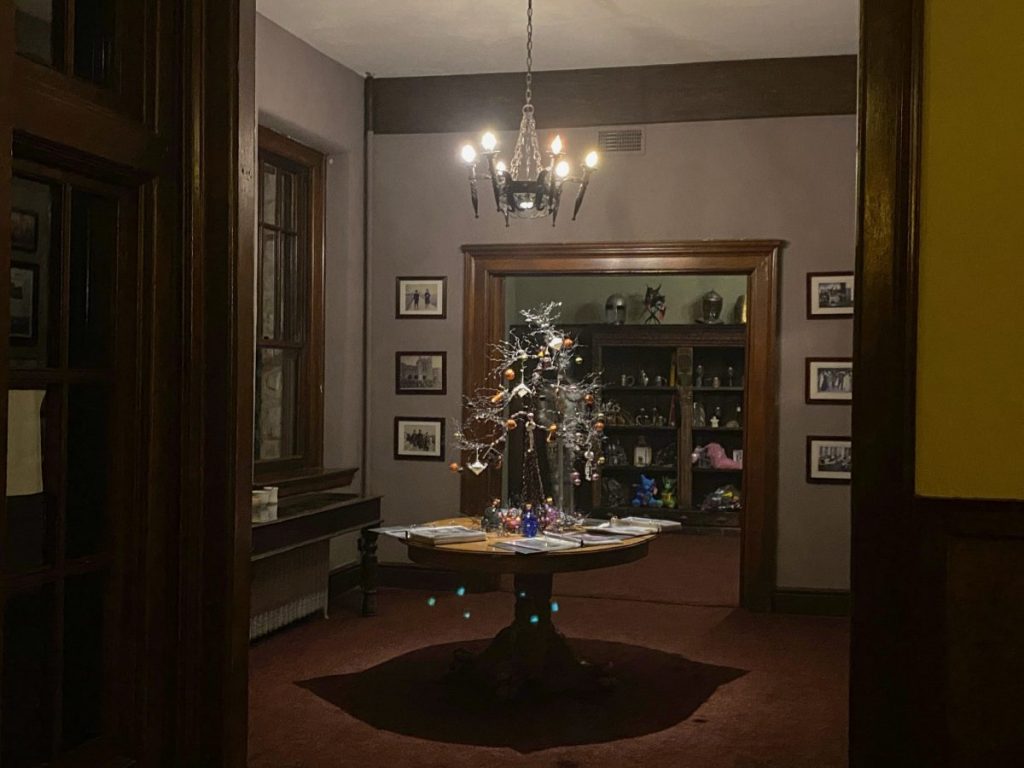 Another way to pass the time in this area is to visit the animatronic fortune teller. Jeff’s fortune was a tad bleak.

You will also be able to use the restrooms in this area before the tour begins. It’s nice to know that those are available. I also liked the details that make you feel like you’ve stepped back in time. 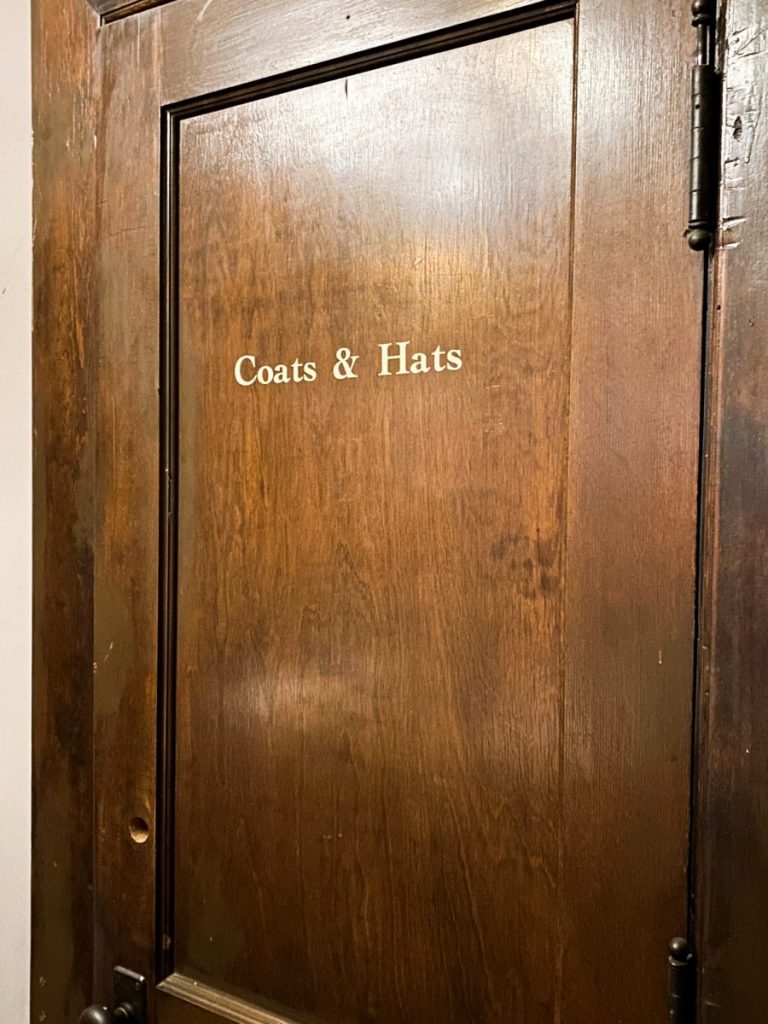 Due to Covid-19 restrictions at the time of our tour, parties were called one at a time to enter the video viewing room where the ghost tour begins. The tour guides had spaced out parties’ chairs ahead of time, and then they instructed guests where to sit. 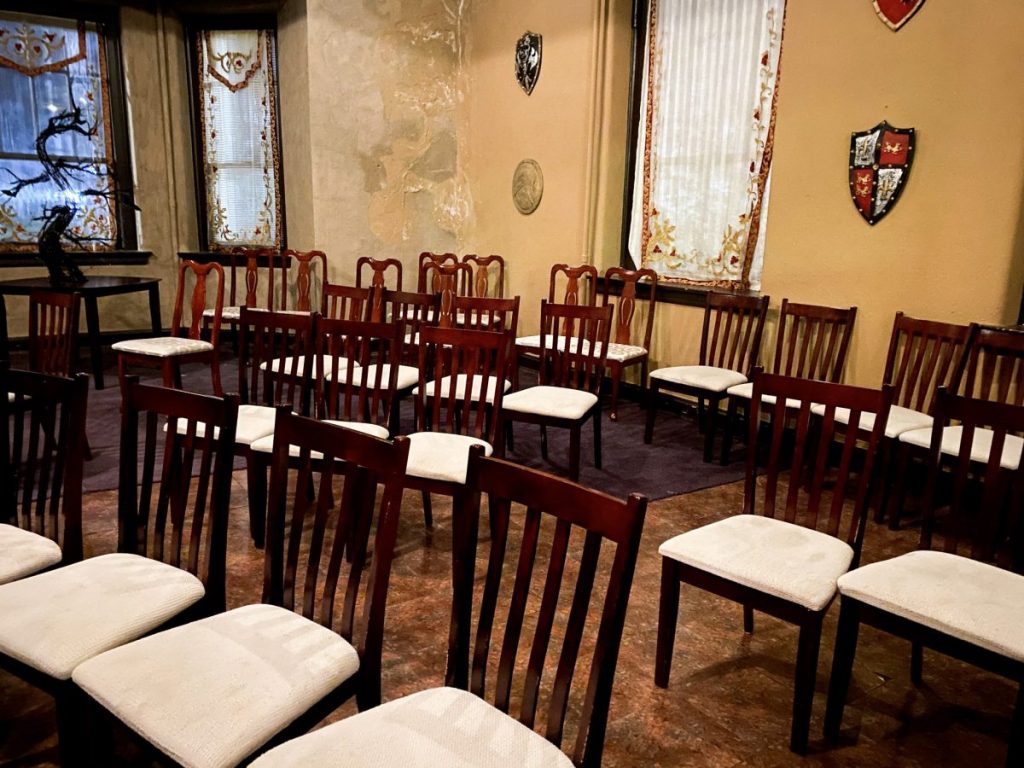 The viewing room is fun with its medieval touches. 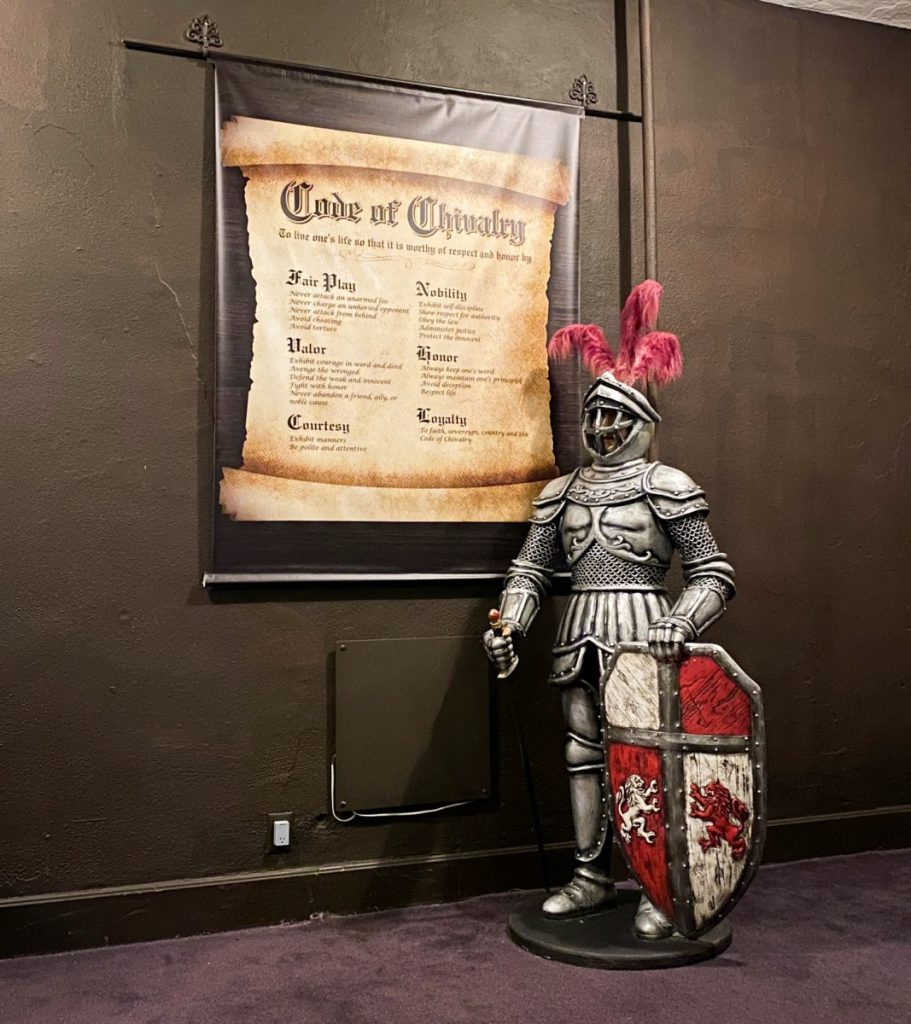 The tour started with an intro with our guide and then a video that explained the history of the castle while showing some of the more compelling images of paranormal activity and some interviews of people who’d spent some time in the building. 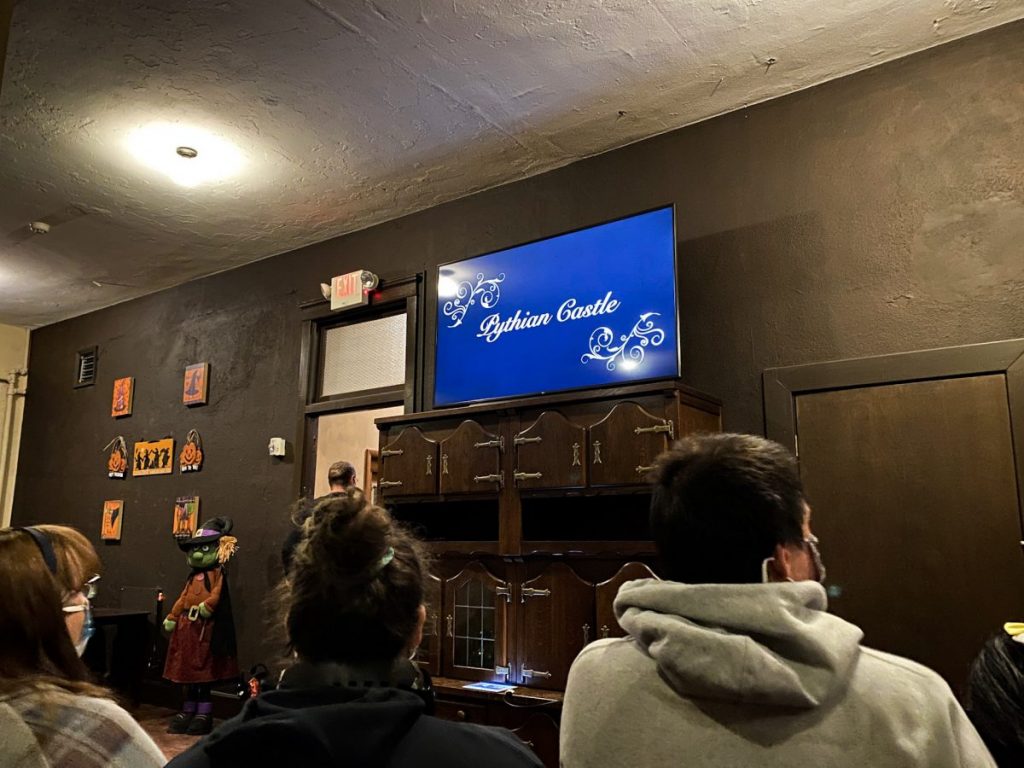 After that, our entire group was split into two so that we could manage smaller areas with fewer people.

One group at a time, we began the tour. Sometimes groups were in the same room, but we were on opposite sides as we took turns going into other spaces. 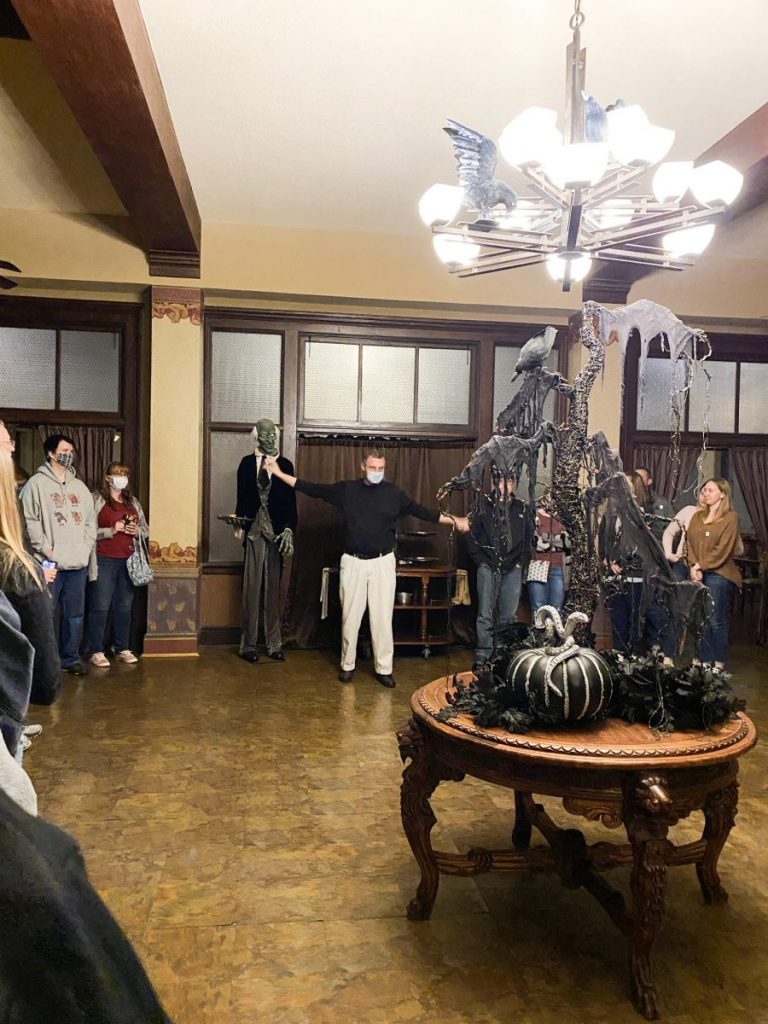 Also note: the Pythian Castle is VERY decorated for Halloween during this time. Everything is decorated, and animatronic figures are everywhere. They could distract from a true ghost tour experience, but we thought it was all good fun.

One of the first areas features this skeleton that interacts with guests. It’s very Late Late Show with Craig Ferguson.

Here’s a close-up of the band. 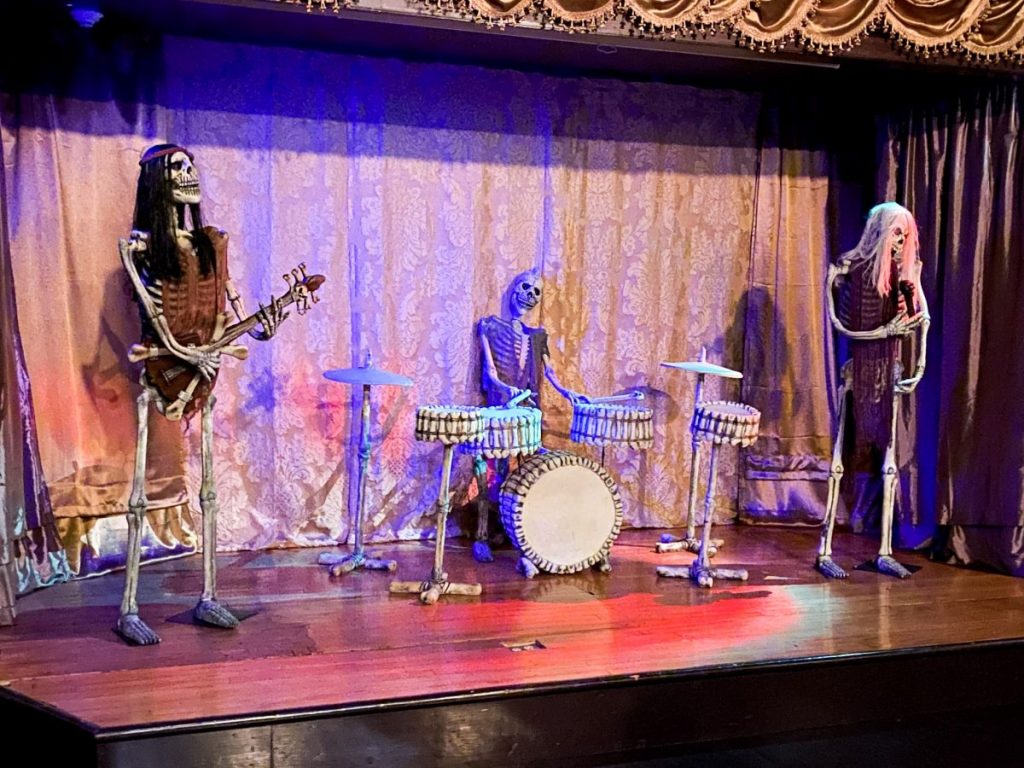 The Tour Gets Darker

Our group winded its way throughout the castle. The basement areas felt the creepiest to me. At one point, you’ll go down a narrow passage that is known for activity. 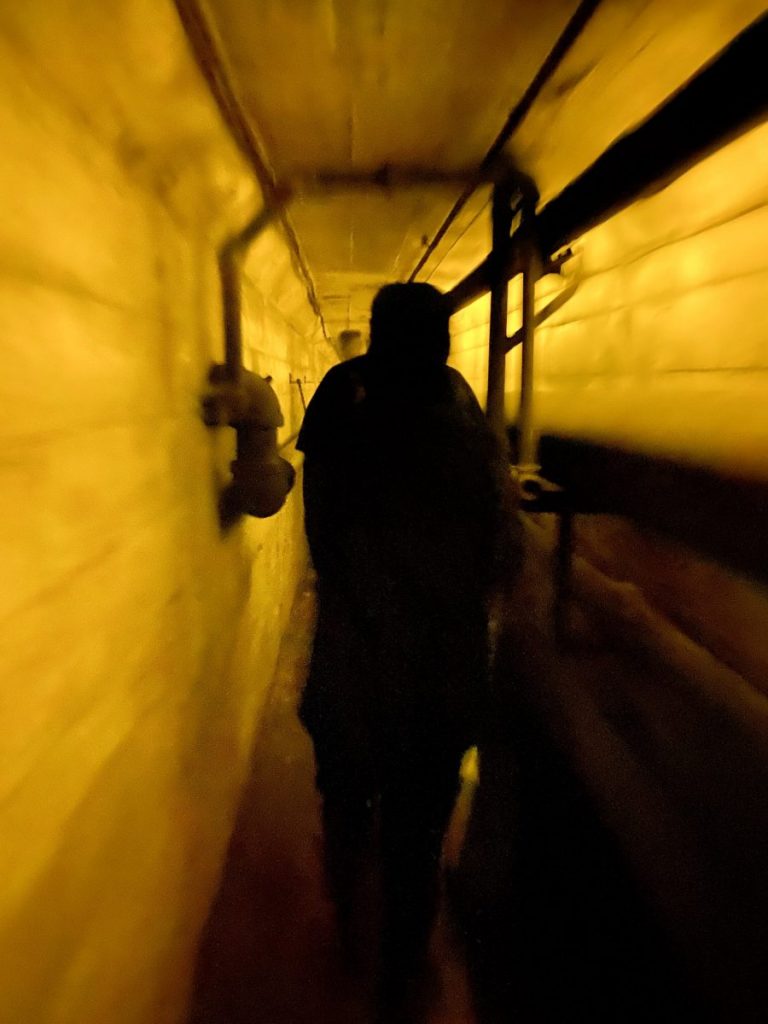 You’ll get to see the cell where a Japanese prisoner of war was allowed to paint on the walls.

You’ll also get to go inside an interrogation room. Remember, it’s decorated for Halloween. 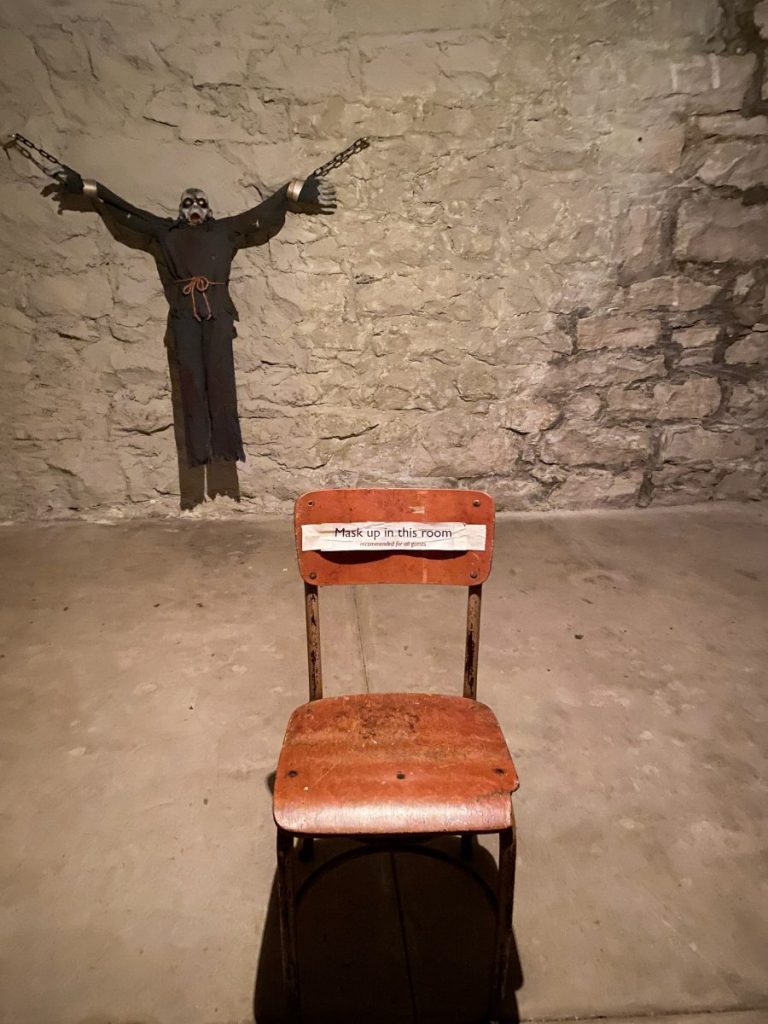 It’s fun to encounter the decorations as you make your way through the castle. 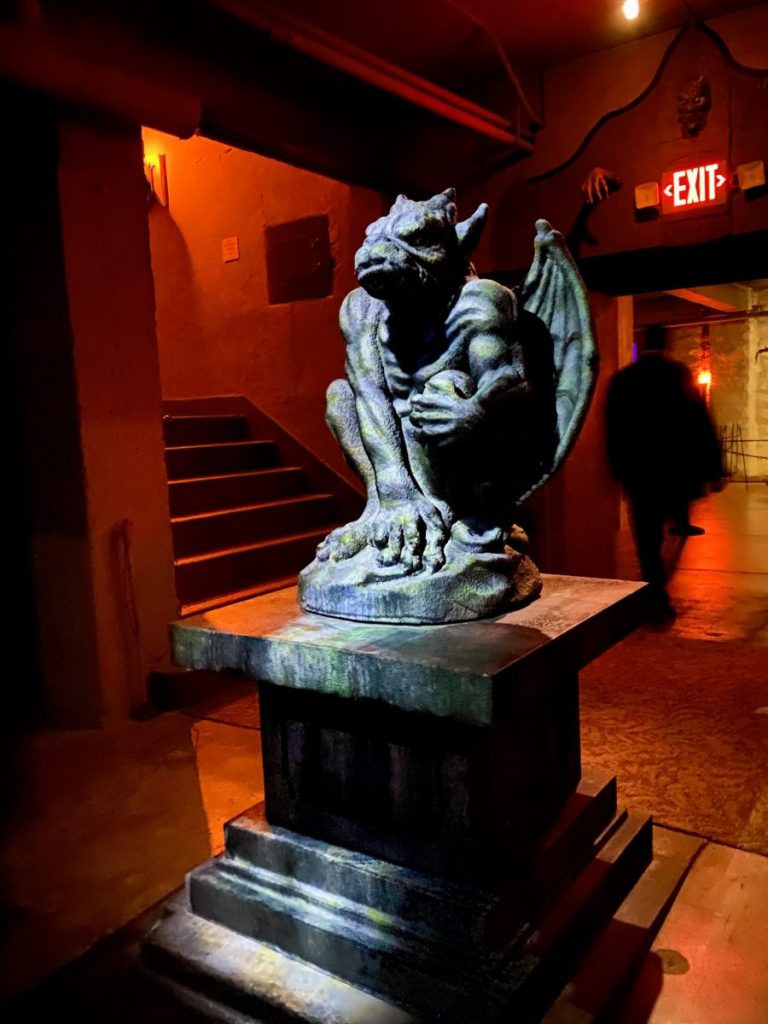 Towards the end of the tour, we sat in the theater room while the guide played some EVPs that were captured in that room. We got to guess what they were saying.

Apparently, this is where most people exchange vows during weddings. 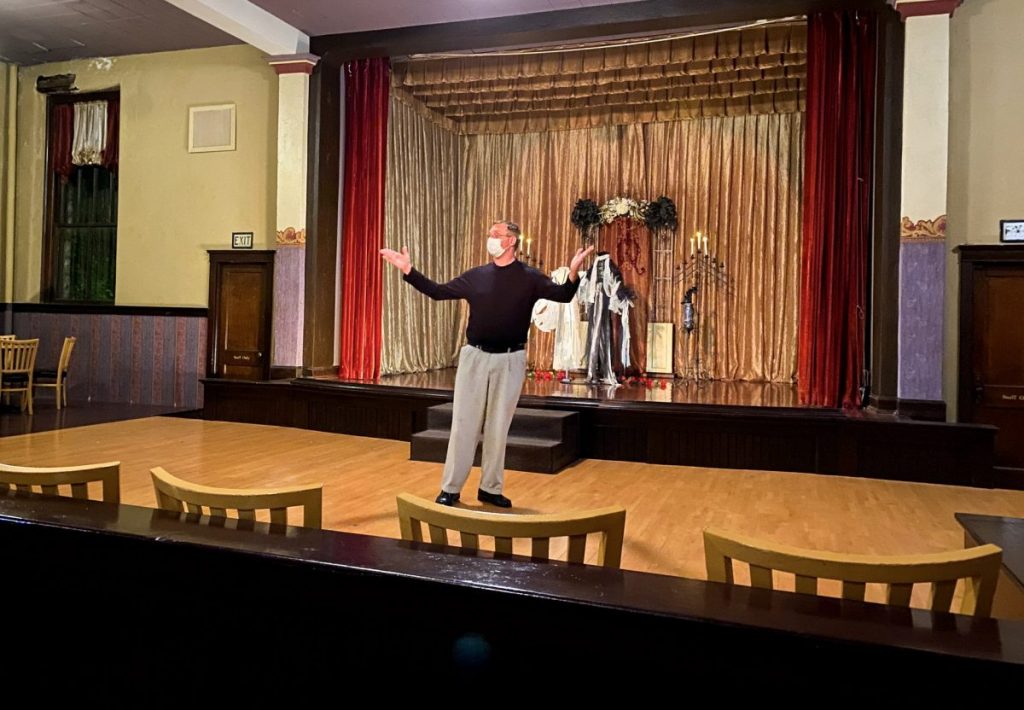 The last part of the tour is held in a room full of windows. It’s said to have been a place where children played and where offices were during World War II. This room has a trigger object, the glowing bear, to try to get evidence from ghost children. 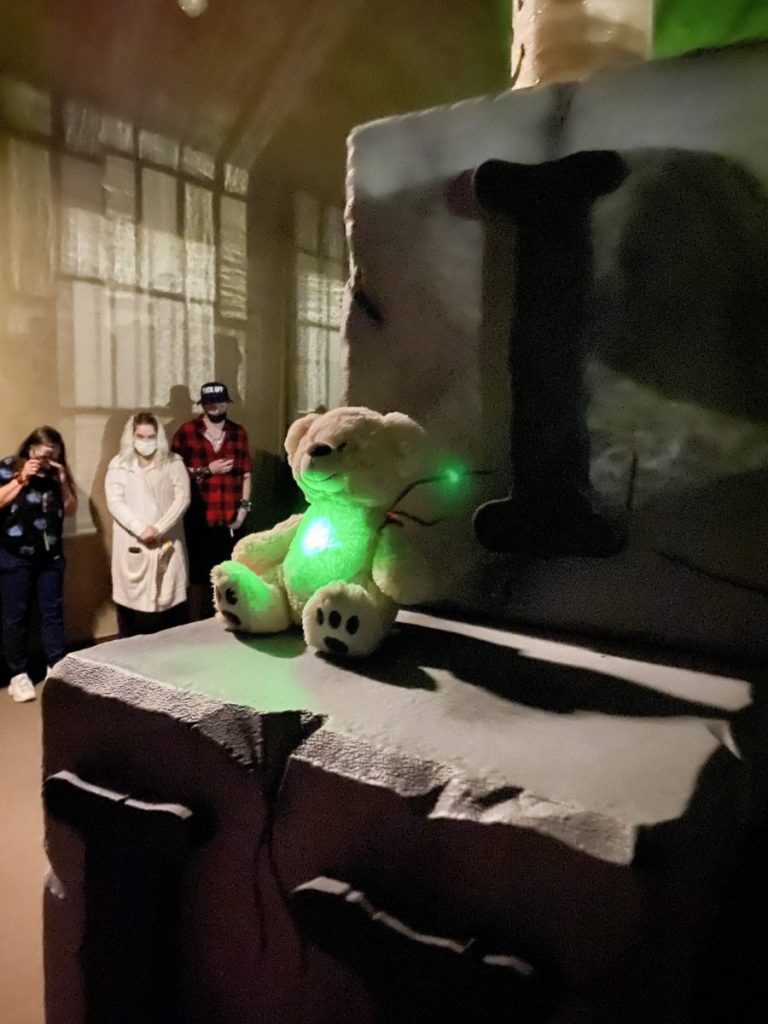 Near this area is a cozy room decorated for Halloween. 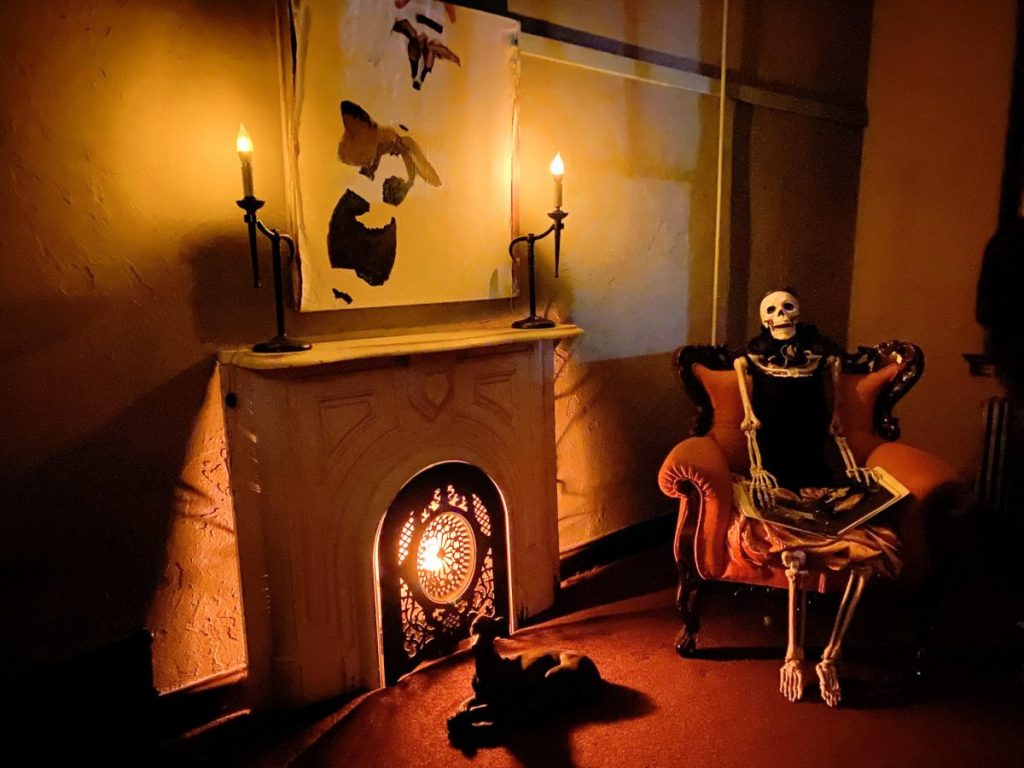 After about an hour and a half, the tour was over. 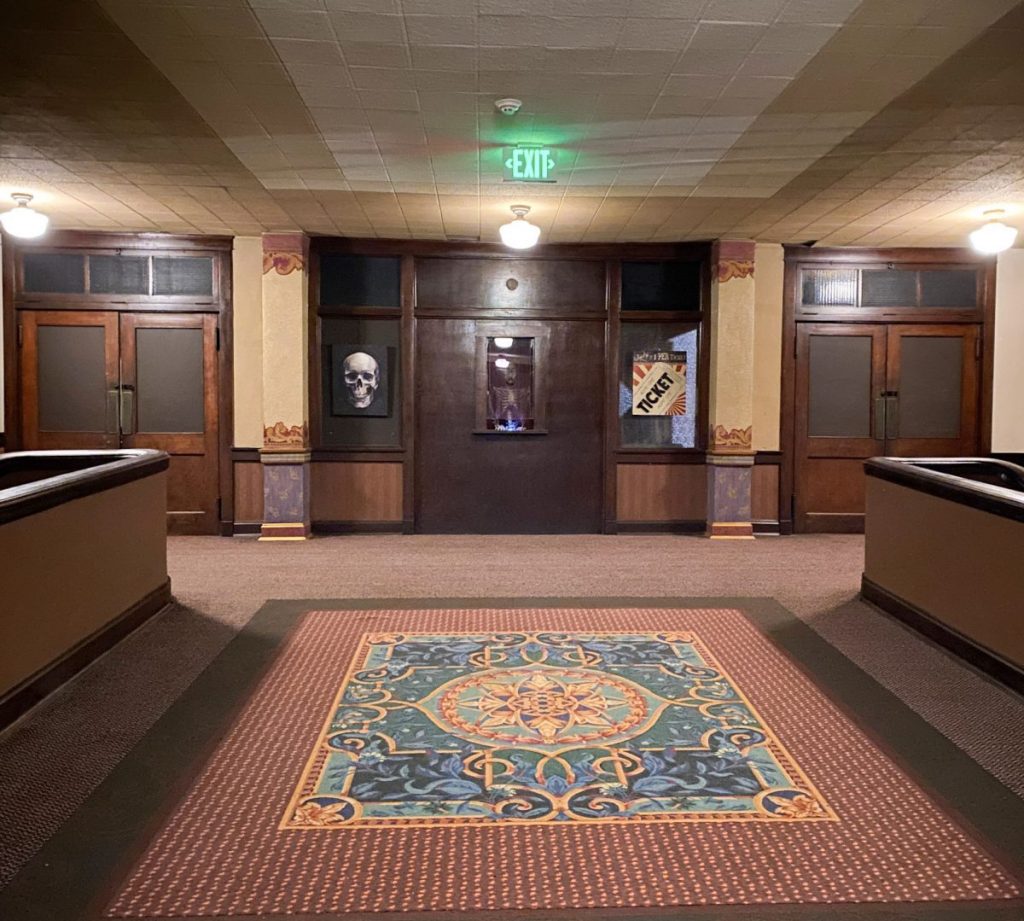 We could spend a little extra time in the last room, but we did need to be mindful of the next tour starting up. After checking out the fun decorations, we made our way downstairs and back to the front. 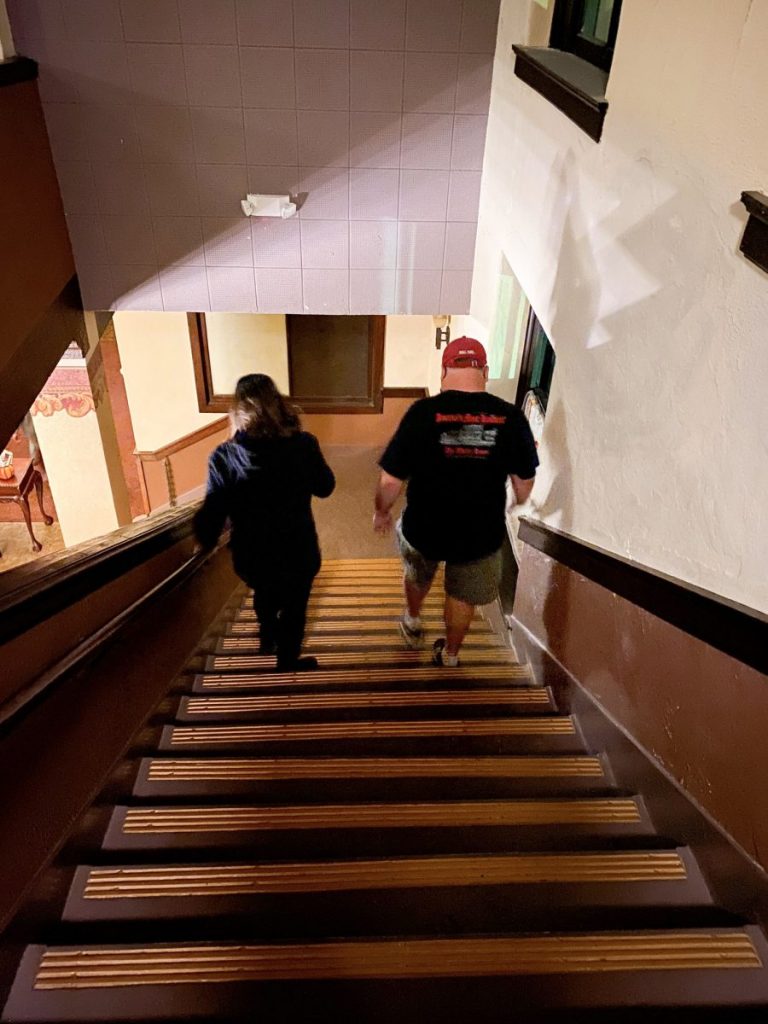 We did make a little purchase to remember our fun evening at the Pythian Castle.

The little white ghost now lives in our entertainment center along with other knickknacks from our adventures.

The Pythian Castle: The Wrap-Up 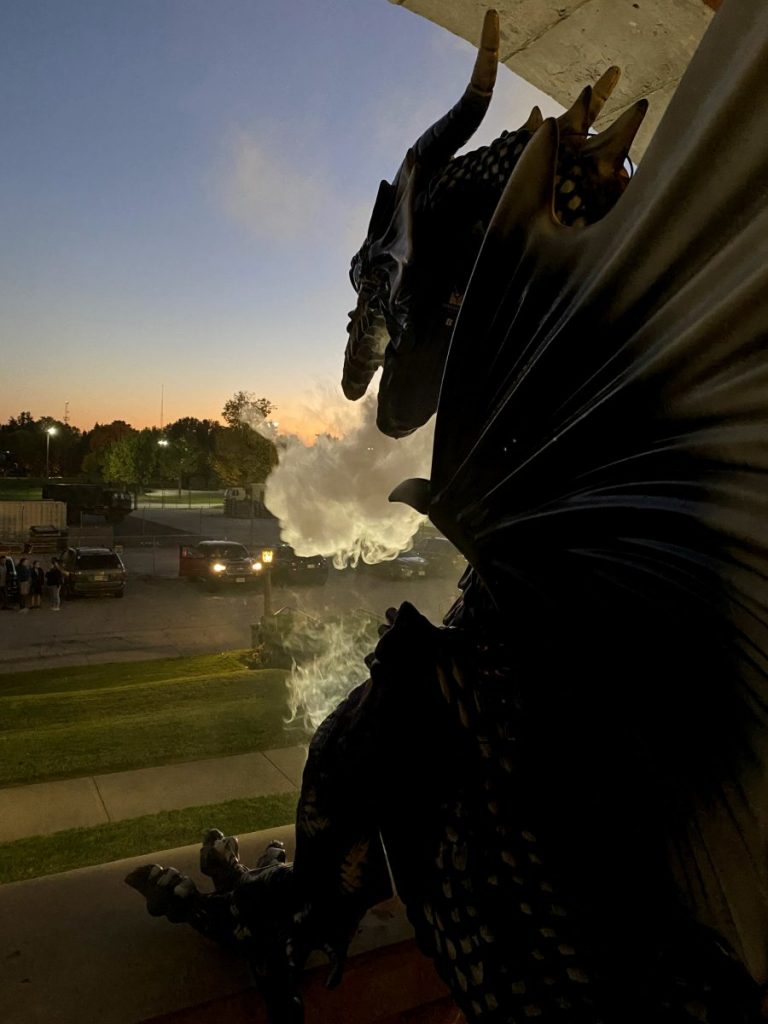 This was an entertaining way to spend an evening in October, though I’m up for a good ghost tour any time of year. If you think the decorations would not be your cup of tea, I’d suggest going at another time of year. We didn’t have any paranormal experiences, but the evidence presented during the tour is compelling and makes you wonder what it would be like to explore the castle on your own. Still, I’m glad we did this tour, and if you’re into exploring haunted places, put the Pythian Castle on your list!