If you were anywhere near the path of totality for Monday’s solar eclipse, you could feel the sense of suspense as people prepared for an event that hasn’t occurred in the U.S. in the continuous 48 states in over 30 years, and even then a total eclipse was only visible in the northwest part of the country.  In 1991, parts of Hawaii were able to see a total solar eclipse.  But this was different.  For about two minutes, a swath across the U.S. from Oregon to South Carolina would be known as the Path of Totality.  With this eclipse being available to so many people across the country, it was inevitable that excitement of the eclipse would grow over the weeks leading up to August 21.

To be honest, I wasn’t planning to write about the eclipse.  I was excited to see it, but I didn’t think it would become part of my family’s travel blog.  After all, I write about destinations to inspire people to visit them.  It’s not like someone can plan a trip to see a total eclipse next summer because it just simply won’t happen.  In fact, even yesterday, I wasn’t planning to write about our eclipse experience.  Yet, I began to think about some conversations I’ve had in the last few days. People have been asking about what we saw and how we felt.  How do you tell someone how surreal it was?  How do you explain that as you were in that moment you couldn’t find the words to describe how you felt?

It wasn’t until a couple of hours after the eclipse on Monday that I learned that another total eclipse would be visible in the U.S. in 2024.  After a Google search, I saw that the path would be near enough to take another short road trip to the Path of Totality.  It wasn’t even a question for Jeff and me.  We are going again in 2024.  Our friends joke that we probably already have hotel reservations.

I continue to think about those moments in totality.  I want to remember it, though it will become difficult; we know how memories fade over time.  And I want others to have the experience I had, or something similar.  When we returned from our total eclipse road trip, I quickly learned that those outside the path of totality, even just a little bit, did not have the same experience we had.  Some called it anti-climatic. Others said it was interesting, but the changes around them were subtle.  But just a couple of hours north, we had an experience that was completely amazing.

I ultimately decided to share our experience to encourage people to plan that trip to the path of totality for the next solar eclipse.  Maybe I feel just a tad guilty for taking a personal day to experience this event with my family, but I really hope everyone who wants to see the next one will make plans early to make the trip a reality.  I’ll admit it; I’m a trip planner, which seems to be a sin among many travelers and travel bloggers. I just don’t want to miss anything, and our planning paid off for this event.  So here is our experience.  And I hope you are inspired to make the trip in 2024.

After we returned from our major road trip this summer, Jeff and I began talking about making a trip to the Path of Totality.  We live in Joplin, Missouri, so we were relatively close to the path.  We would just need to drive a couple of hours north–perhaps Sedalia or Columbia, we thought initially.  Jeff ordered the eclipse glasses on Amazon, and yes, they met the guidelines.  A few weeks later we decided that Jefferson City or Columbia would be a great place to view the eclipse.  We booked a room in Osage Beach, Missouri, near the Lake of the Ozarks.  Rooms were already becoming more difficult to get, but we managed to get a room at a moderate hotel with an outdoor swimming pool and breakfast for well under $100.

We got a hotel room to break up the drive a little, though in reality if we had to, we could’ve driven there and back in one day.  We got to Osage Beach on Sunday afternoon, so we decided to explore a little.  Kristin had never been to the Lake of the Ozarks, so we showed her the Bagnell Strip and the dam. 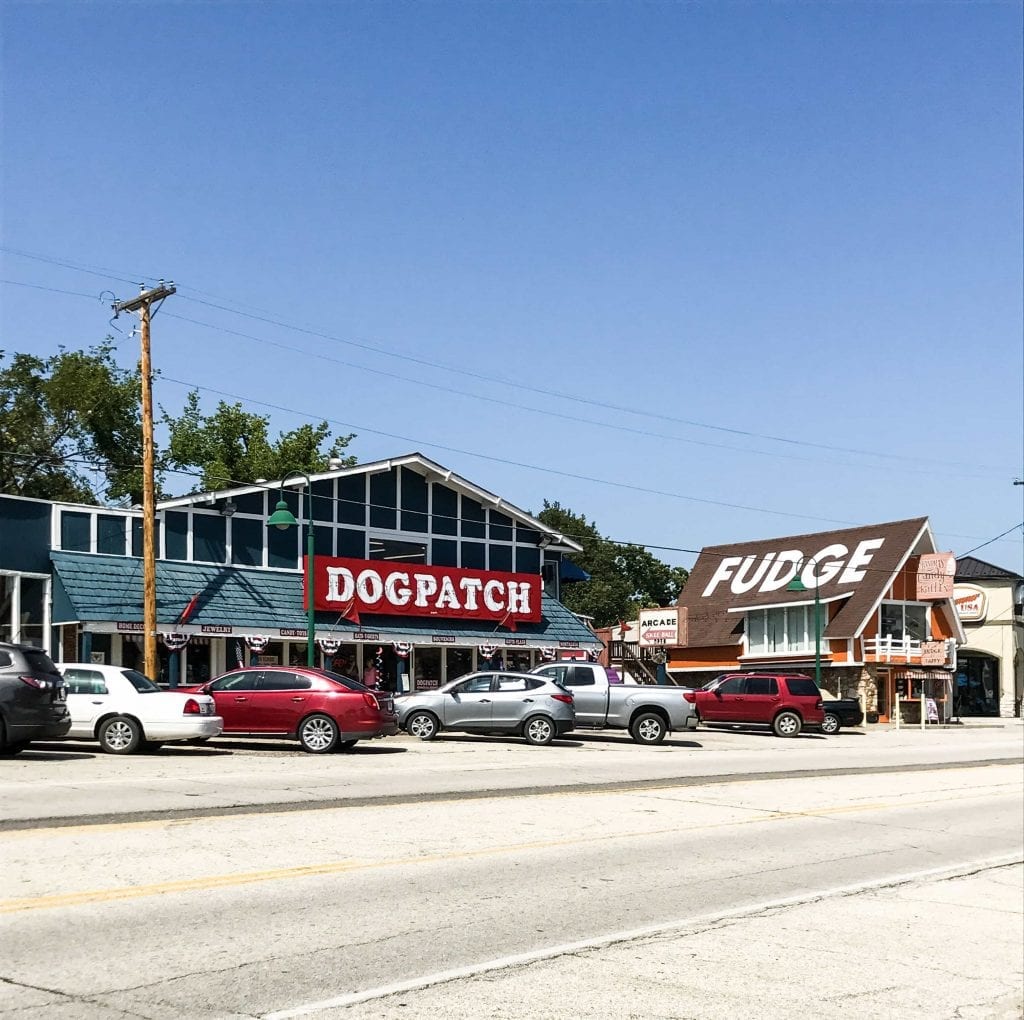 If you’ve been watching the show Ozark on Netflix, you may recognize the area.  Some scenes were shot here, but most of it is filmed in Atlanta. It’s a lovely little tourist area. 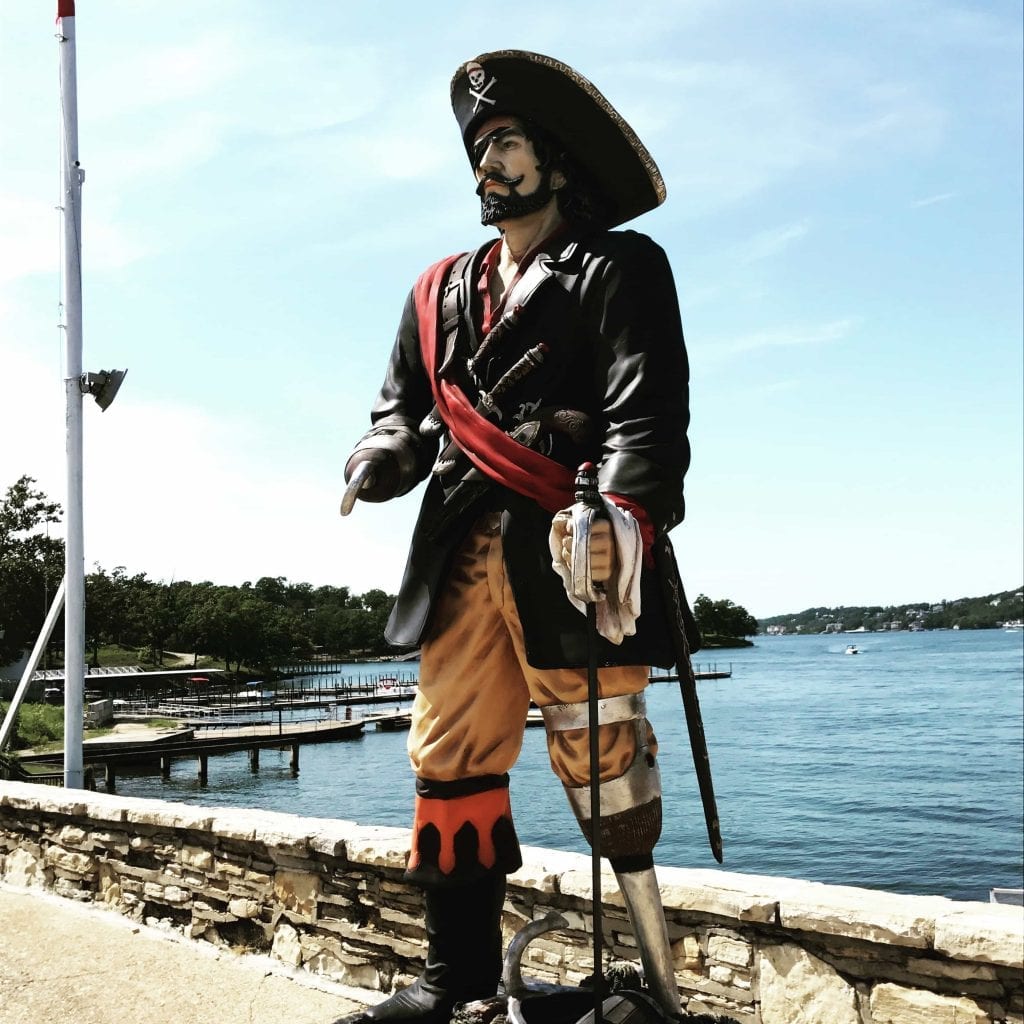 You can take a lake cruise from one end of the strip.  The cruise may or may not include a pirate or two. 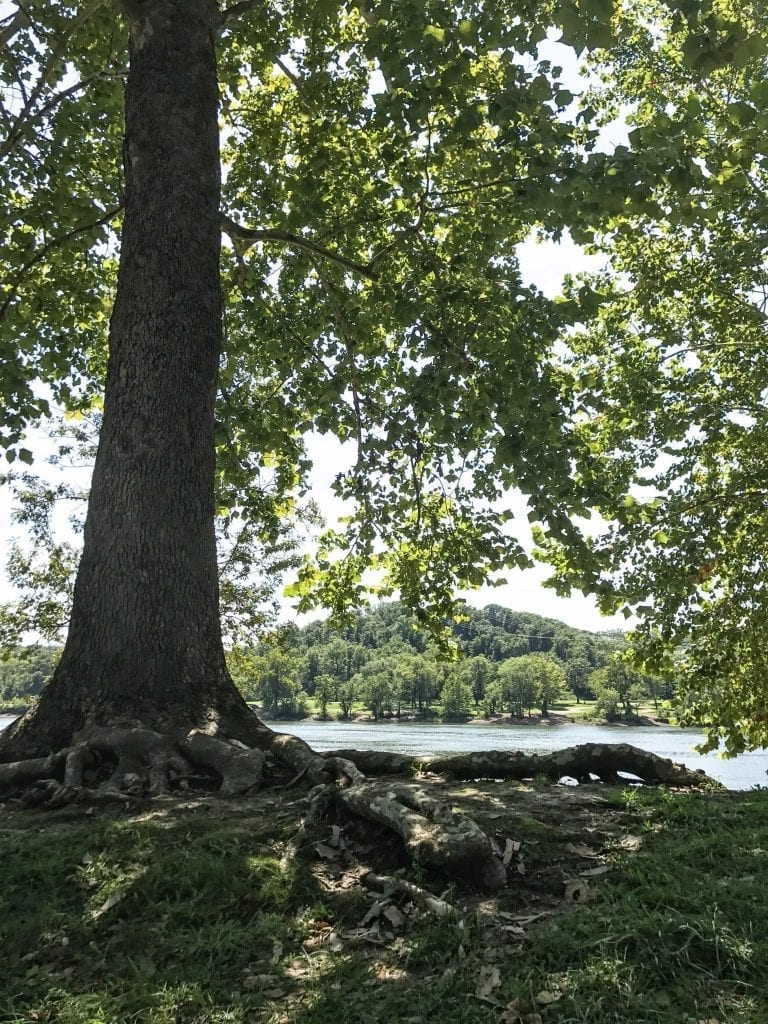 There are a lot of great places to see the lake.  This tree is near the dam.  The roots captured my imagination.

After we explored, we took Kristin for a swim in the hotel pool.  After a quick trip to Wal-Mart and dinner, we noticed a storm rolling in over the lake.  We had been watching the weather because we were concerned about cloud coverage for the eclipse.  We went to sleep still questioning what we should do.  We were thinking about going to the Columbia Regional Airport area, but now we were uncertain. 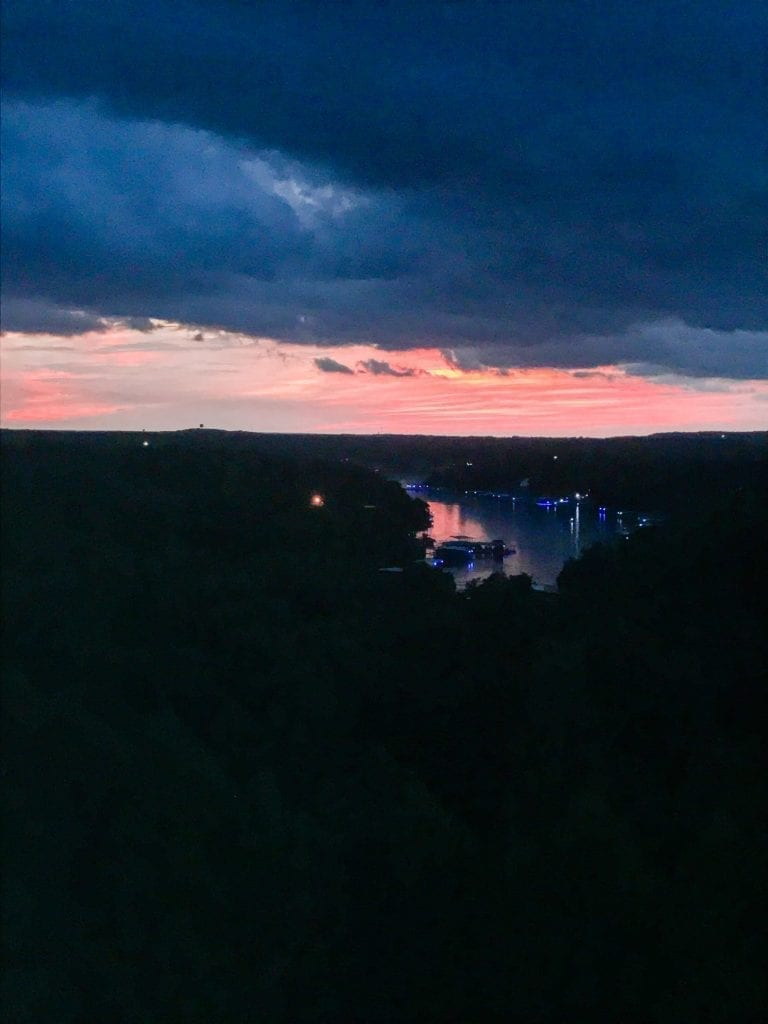 After having breakfast at the pool, we loaded up the car and checked out of the hotel.  We made our first live Facebook video relating to the eclipse.  Initially, I was just planning to cover the eclipse on social media only.  I thought it would be fun and give us some more experience with these tools.  After the video, we decided to keep our plan to go to the airport.

As we drove to Jefferson City, you could definitely tell there was traffic due to people wanting to view the eclipse, but it wasn’t overbearing in any way.  With an eye on the clouds, we drove past several viewing parties and events along our route.  We saw school buses parked here and there.  Jeff and I continued to discuss the clouds.

We stopped at the McDonald’s in Ashland.  There was a school bus, but the line moved quickly.  Outside the restaurant, Jeff talked to people who were talking about the eclipse. A newscaster from Northwest Arkansas was there, and everyone was talking about the clouds.  The newscaster decided to head back towards Jefferson City to a little town called Mokane.  Jeff and I thought we should head that way, too.  We needed to get as far away from the clouds as we could!

During this time, Jeff and I went live on Facebook describing what our plan was.  We had never done live videos together, so this was a new experience for our blog.  Finally, we could see the dome of the capital building again.  We stayed north of the city, though.

We found ourselves on Highway 94 between the Missouri River and the Katy Trail.  We had trees covering the trail to the north of us, and fields of crops to the south.  We stopped before we got to Mokane near a small town called Tebbets.  We drove between two fields on a gravel road to give us some clearance from the trees.  Some people were setting up for viewing the eclipse along the highway.  In fact, we saw several telescopes.  But ultimately, we selected a spot away from everyone else.  Maybe we missed some of the excitement of not being with a lot of other people, but viewing the eclipse alone in the beauty of nature seemed right for our family.

We immediately started looking at the eclipse with our glasses.  At first, we could see just a black dot over the sun.  You could not tell a difference without the glasses on. The shadow continued to cover the sun, and we continued looking up! 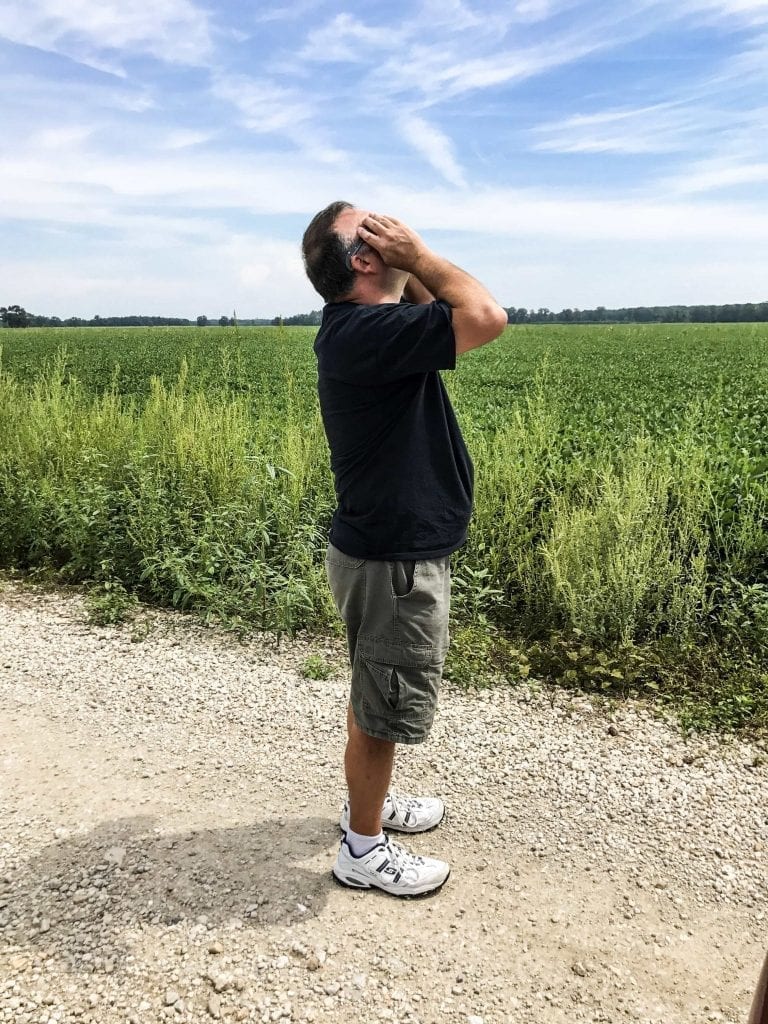 It was a warm day, so we left the car running so Kristin could cool off every once in awhile.  I took advantage of the wait to take pictures around us.  Here is the highway. 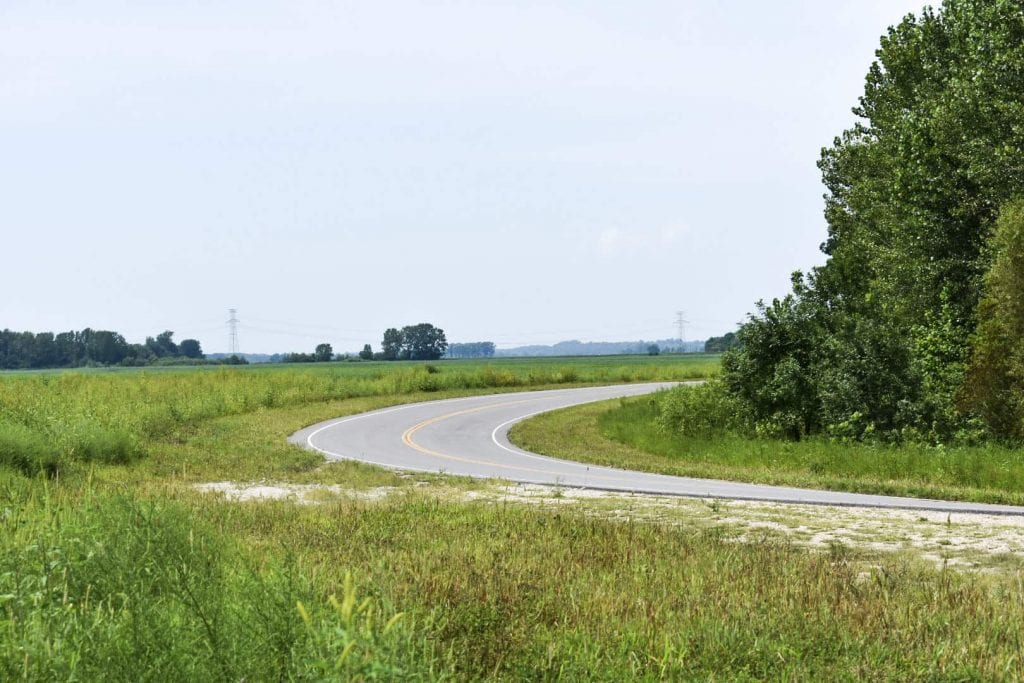 We were surrounded by the beauty of nature.  It was so peaceful; it was a quiet you can only find out in the country. 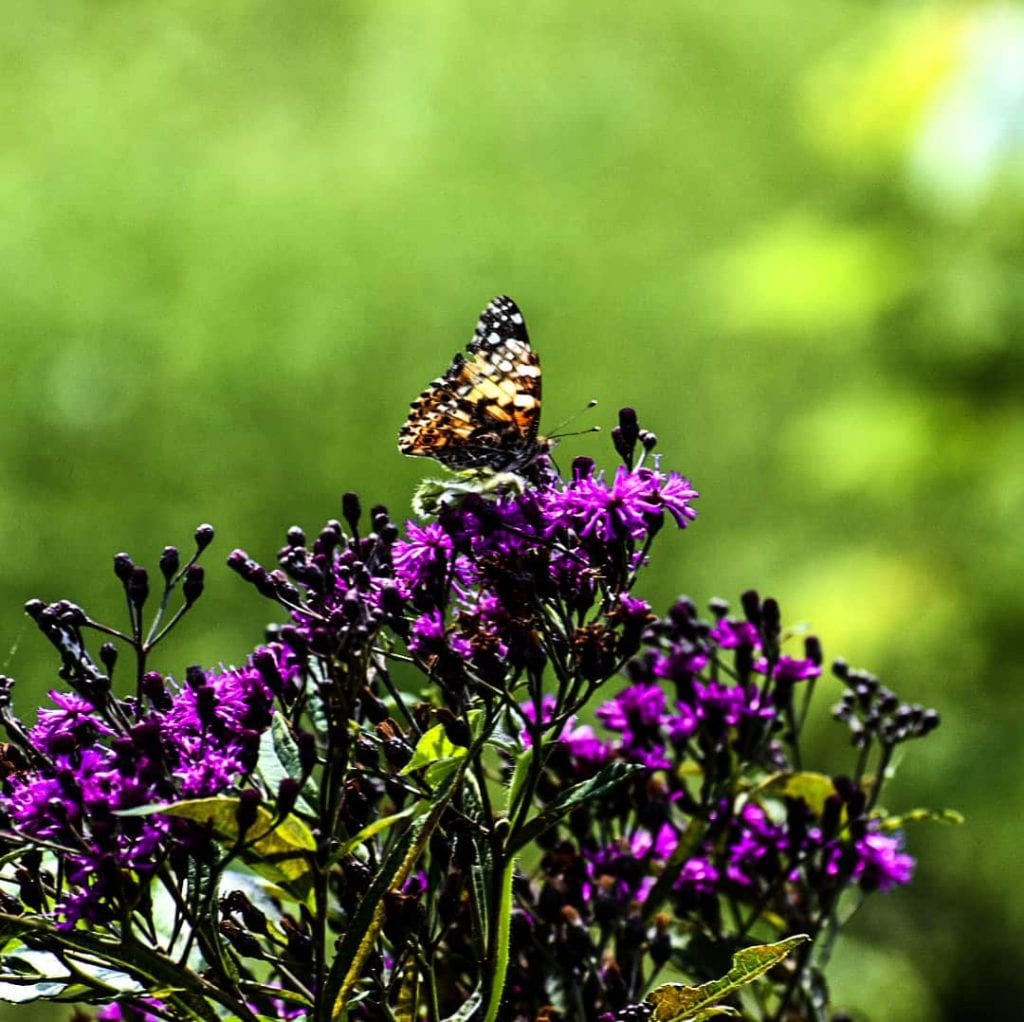 Soon, Jeff and I began to notice that it was slightly darker around us.  We still kept our eyes on the sun, with glasses, of course.  We even took pictures with our cell phones through the glasses.  I didn’t want to risk the DSLR before totality.  Next time, I will get a filter for it. 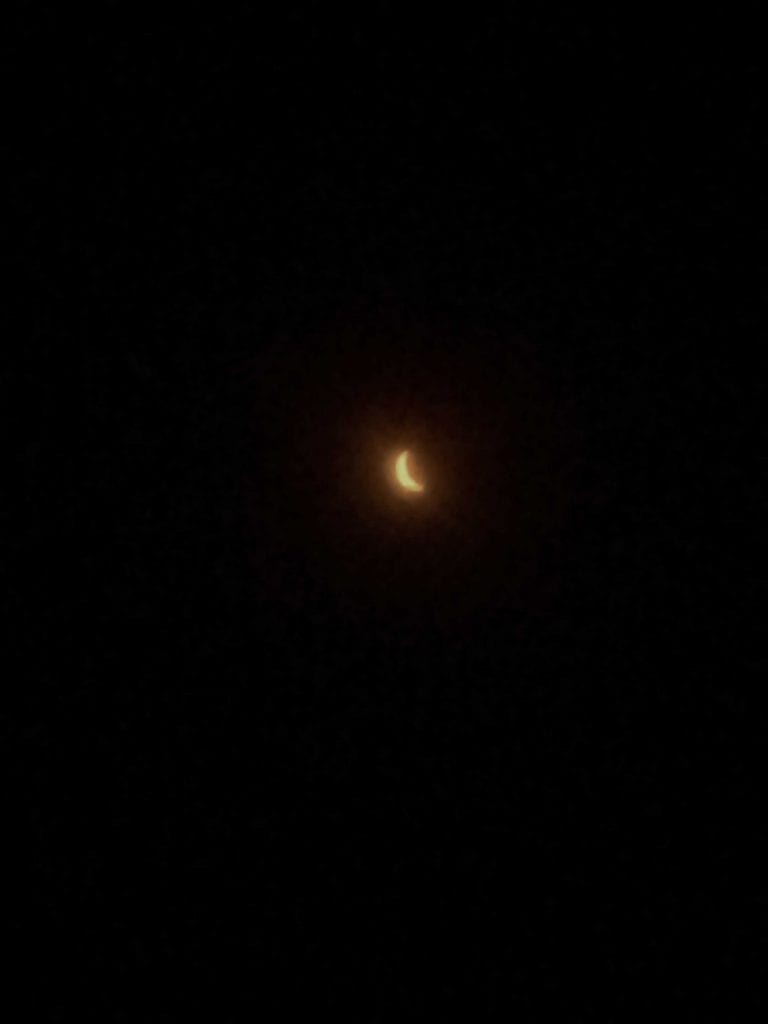 The closer we got to totality, the darker it started to get. 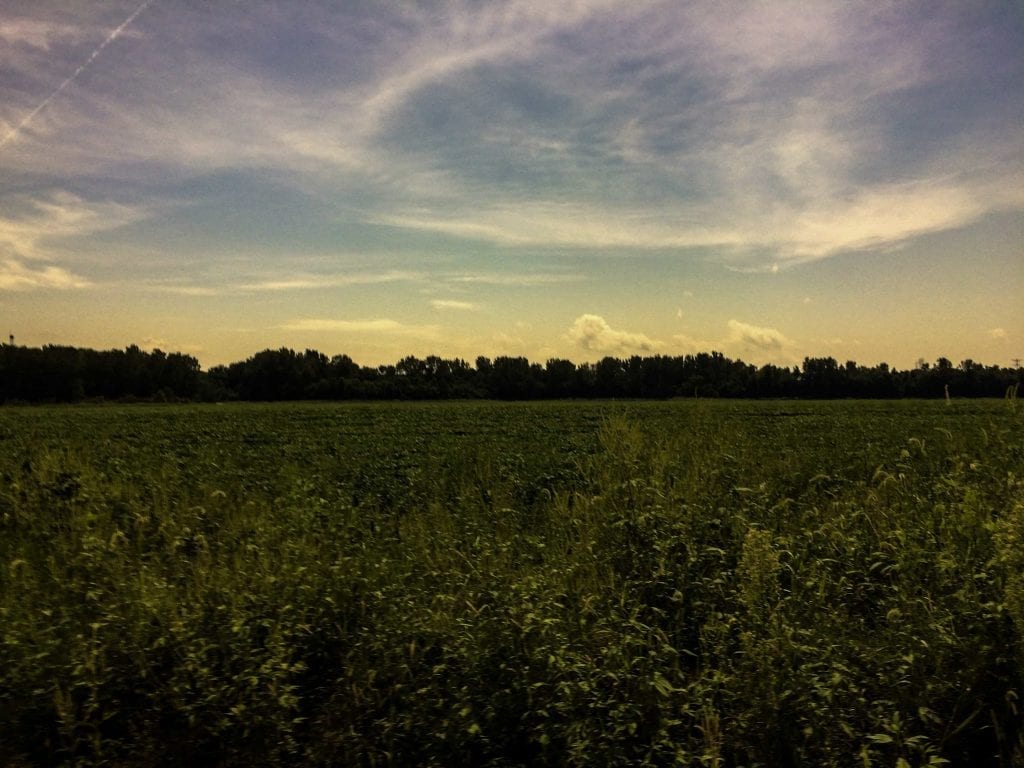 And then suddenly, totality happened!  We were so excited.  I immediately began shooting my DSLR photos with my Nikon D3400.  I used my biggest lens, a 300mm. 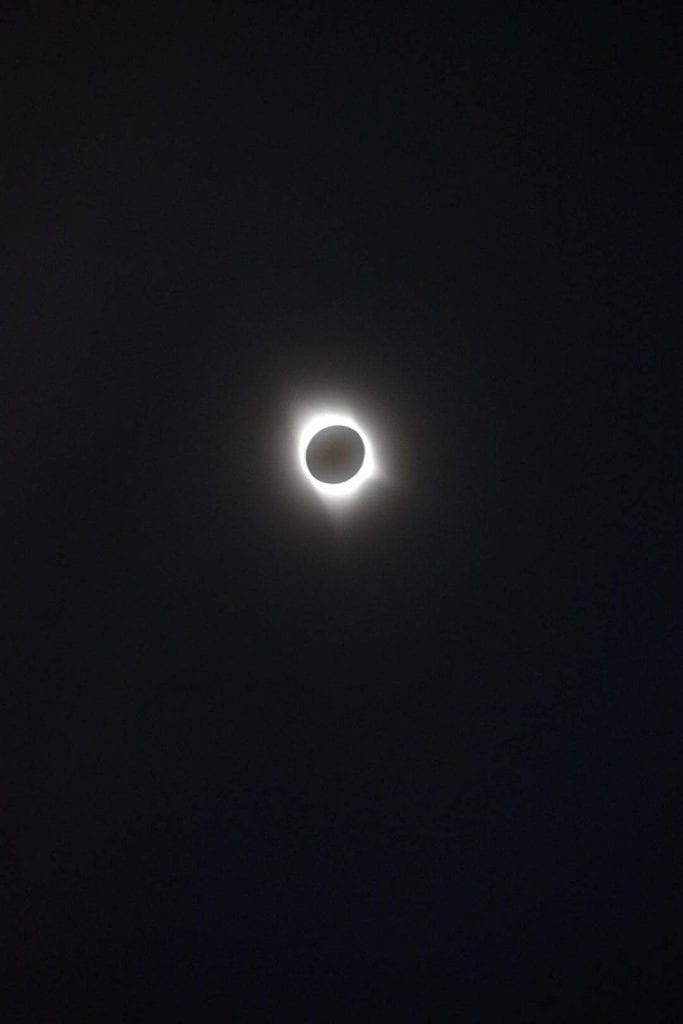 Here is how the eclipse looked on Jeff’s iPhone. 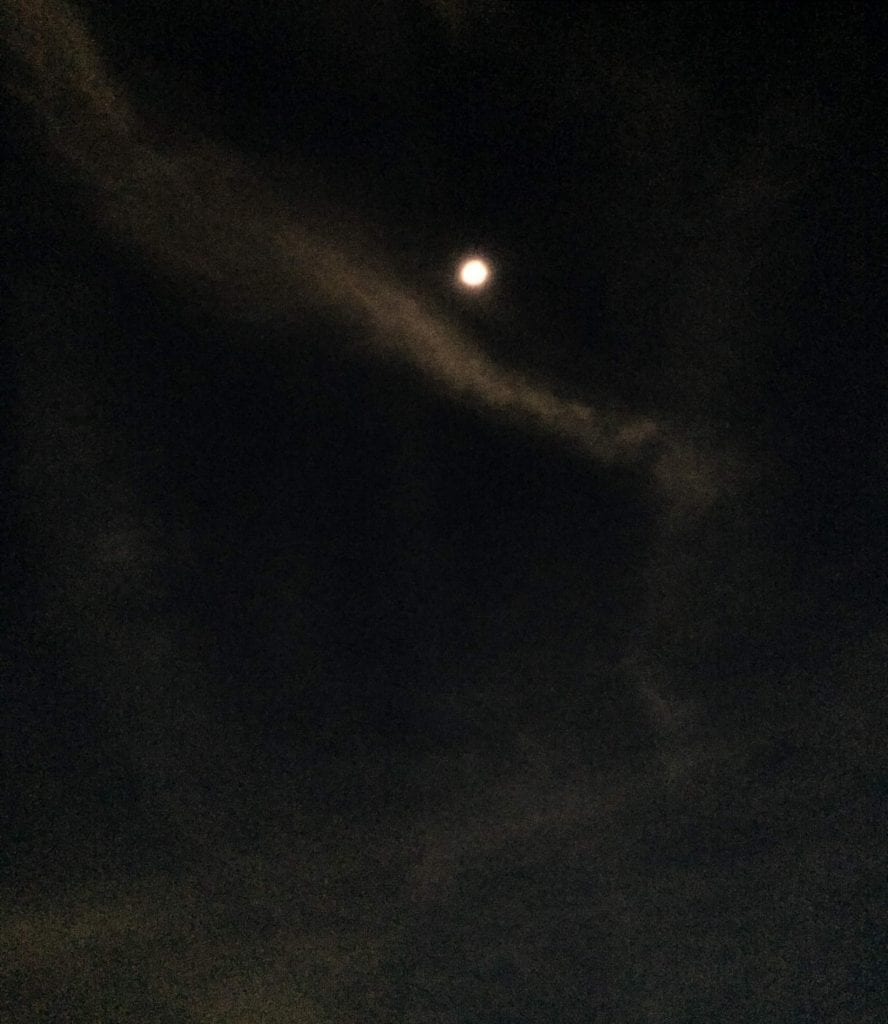 During totality, we saw the two NASA jets following the shadow.  I was trying to live in the moment while documenting it, so I don’t have pictures of the jets.  I also did a live Facebook video during part of totality.

We heard the cicadas chirping, and it did look like sunset around us.  I had read that we should be able to see a 360-degree sunset, but at the time I didn’t see that.  I do see the look of sunset in our pictures, though. 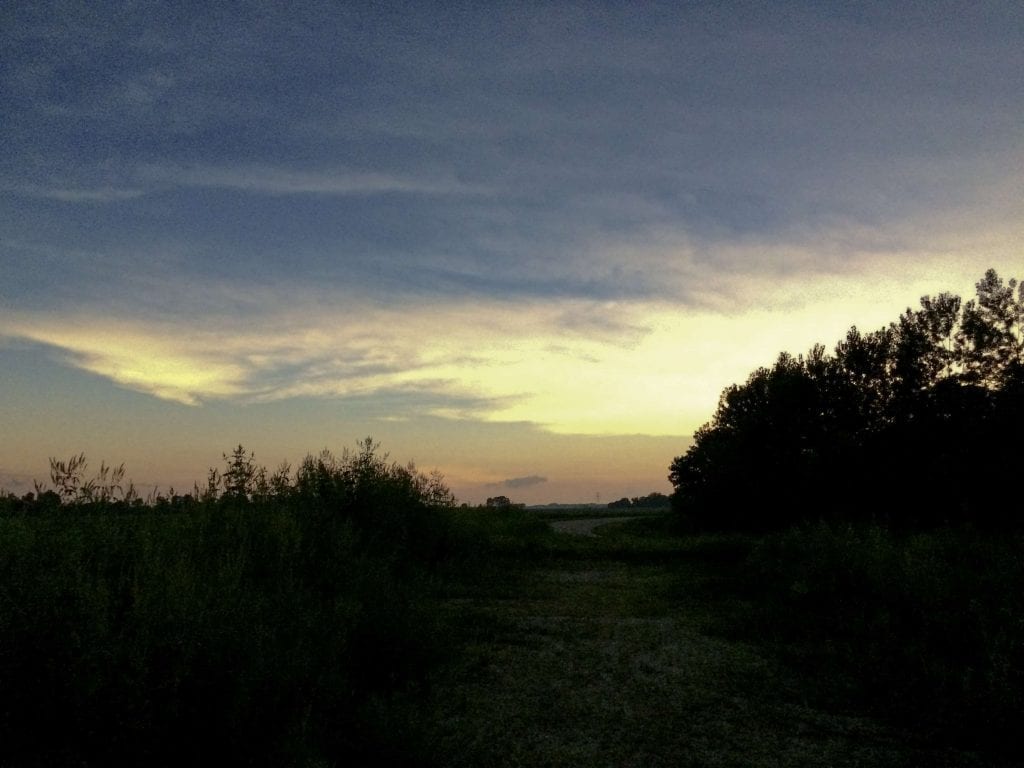 Our car lights automatically came on during totality since our car was running. 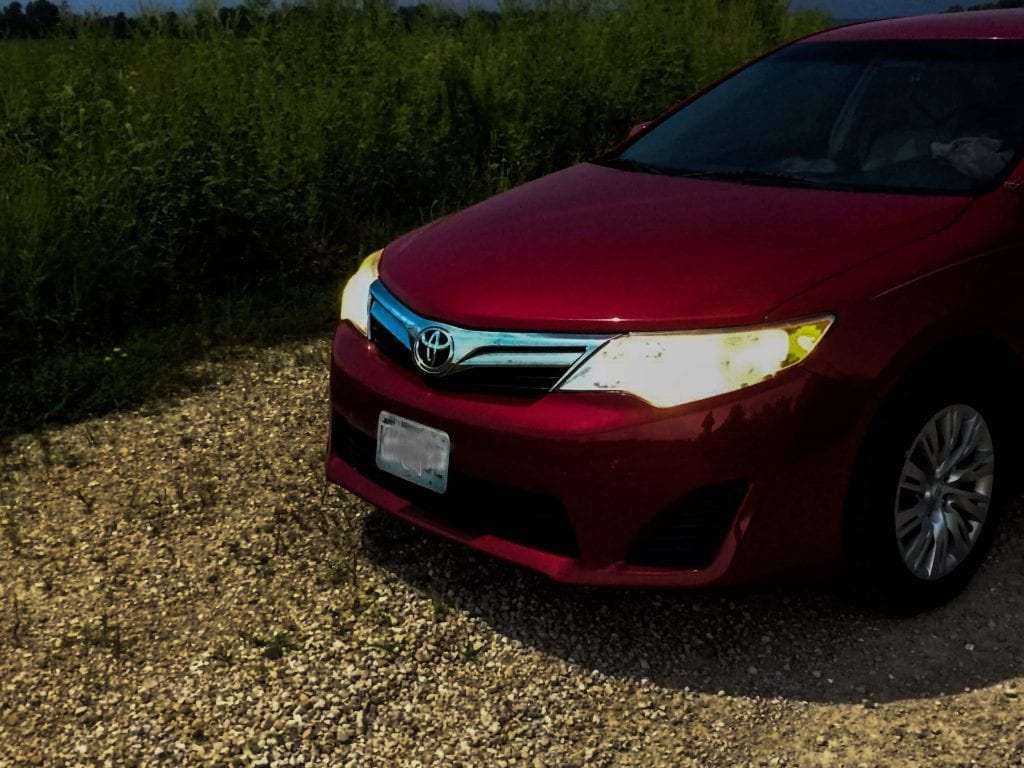 The pictures do not show how dark it was.  It wasn’t as dark as midnight, but it certainly felt like sundown.  We did see Venus and a few stars.  I was thinking how truly awesome this was to witness.  Not the way we normally say “awesome” at an everyday occurrence.  I was in awe of nature and its beauty and perfection.

Here is the close-up of totality. 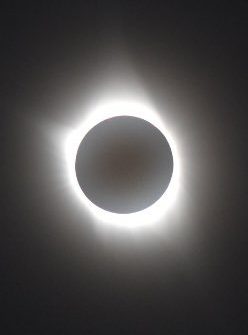 I wish this picture could truly capture what we saw.

Here is the Facebook video we did live during totality.

All too soon it was over.  The sun started to come back out again as the shadow slowly disappeared. Honestly, I was bummed that is was really over.  Those two minutes or so go quickly!  There was nothing left to do but get in our car and head back to Jefferson City.

Traffic-wise, things were moving along for awhile, but then we found all the cars.  This traffic maintained a variety of speeds as we drove home.  We were in this traffic all the way to Lebanon, except for a little detour we took to try to get ahead of some of it.  After Lebanon, we had patches of slowed traffic, but it was better.  It took us about two extra hours to get home. 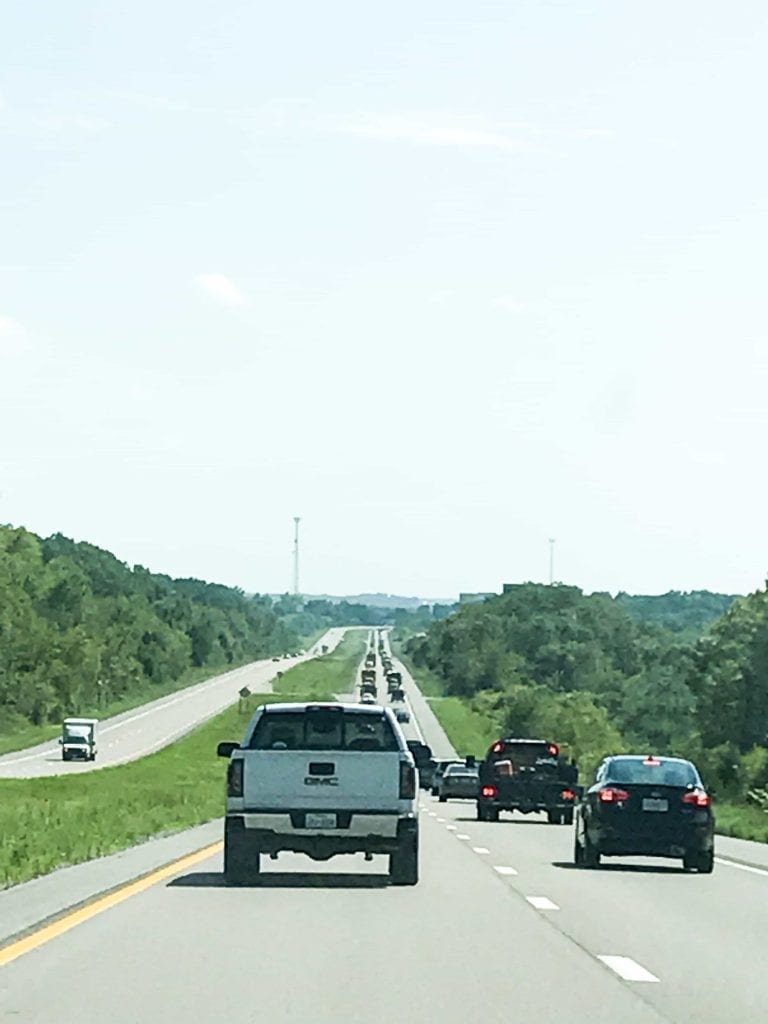 It was nice to finally get home that day.  When I do this again, I may stay another night in a hotel to avoid the long ride home!

This was our experience, and I definitely want to repeat it in 2024.  And I want you to experience it, too!  If you are thinking about it, I would encourage you to go for it.  Think about where you want to go to view it early.  Save up a couple of vacation days, make the hotel reservation, and buy those glasses in advance!  Take the kids out of school, and make a family outing of it.  It’s these little family adventures that mean so much, and they bind us together even more.  I’m so grateful I was able to witness this amazing event, but I’m even more grateful that I was able to share it with my family.

So, are you convinced yet?  Will you make plans to see the next total eclipse in the U.S.?  Where will you go to see this awe-inspiring event?