When I discovered that you could see sea lions and seals in the wild at La Jolla in San Diego, I knew we had to make La Jolla Beach a part of our quick diversion to San Diego.  We only planned one night in San Diego after two in Los Angeles, so we had to prioritize our activities.  Visiting the seals and sea lions was a perfect activity for our family!

Finding the Sea Lions and Seals 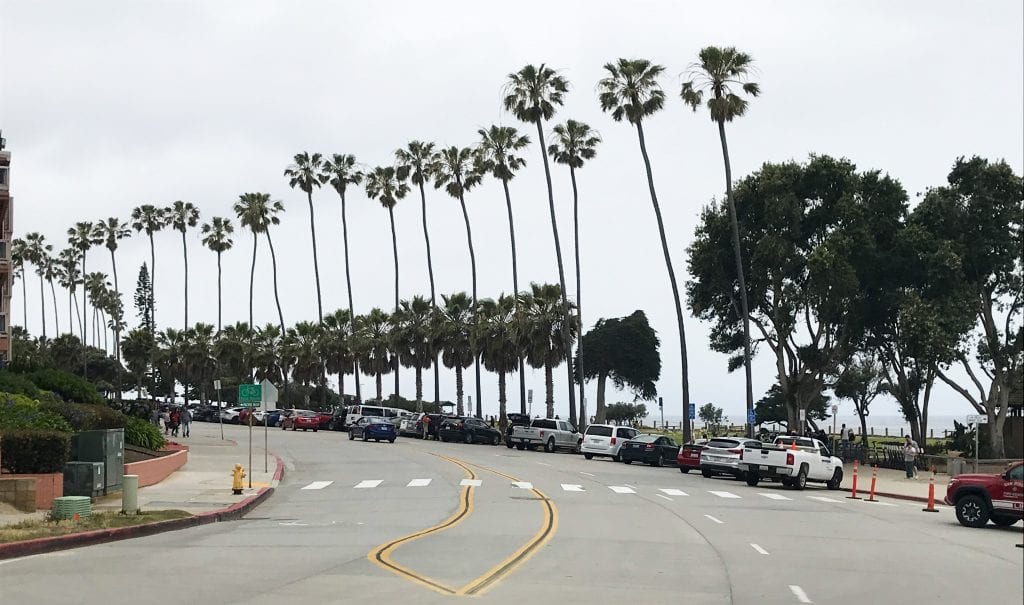 This was our first visit to San Diego, so we weren’t sure what to expect.  We chose Fairfield Inn and Suites San Diego Old Town for our hotel for its proximity to Old Town.  La Jolla is about 20 minutes away, so it’s an easy drive from Old Town.  Once we got to the La Jolla area, we looked for a  place to park.  Here is a map of the area from the San Diego Attractions website.  We found a place to parallel park somewhere between Shell Beach and Boomer Beach, according to the map.  We had a view of the Children’s Pool, but we didn’t walk that direction. Instead, we headed towards the La Jolla Cove. 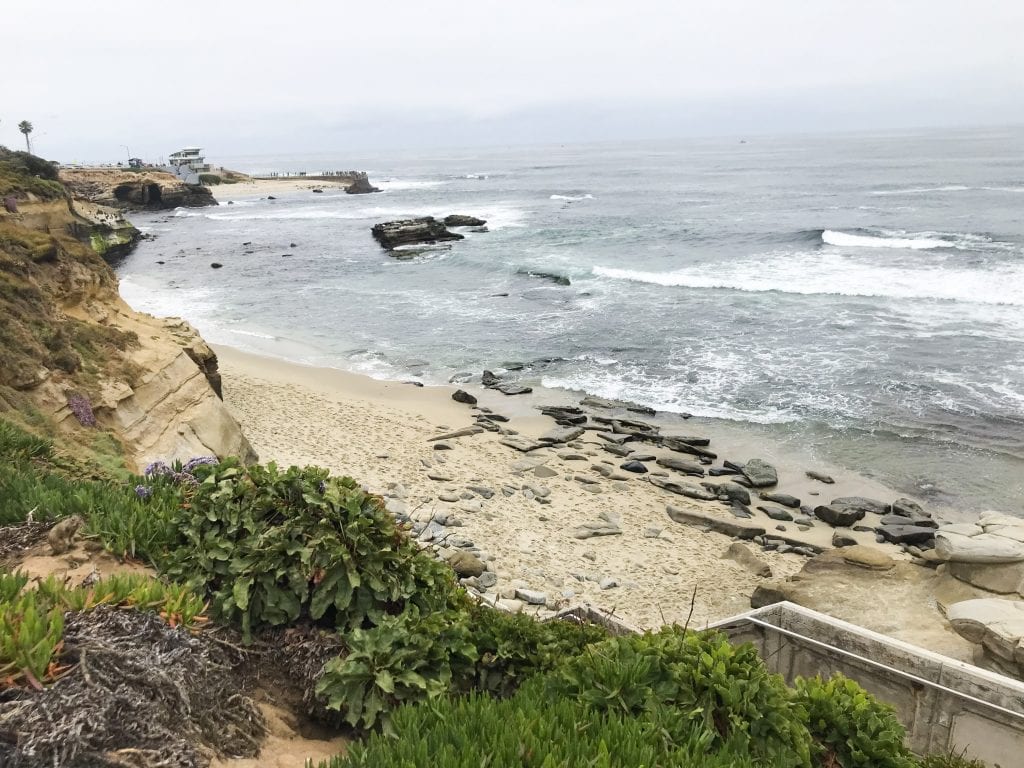 We were immediately captivated by the beauty of the area! 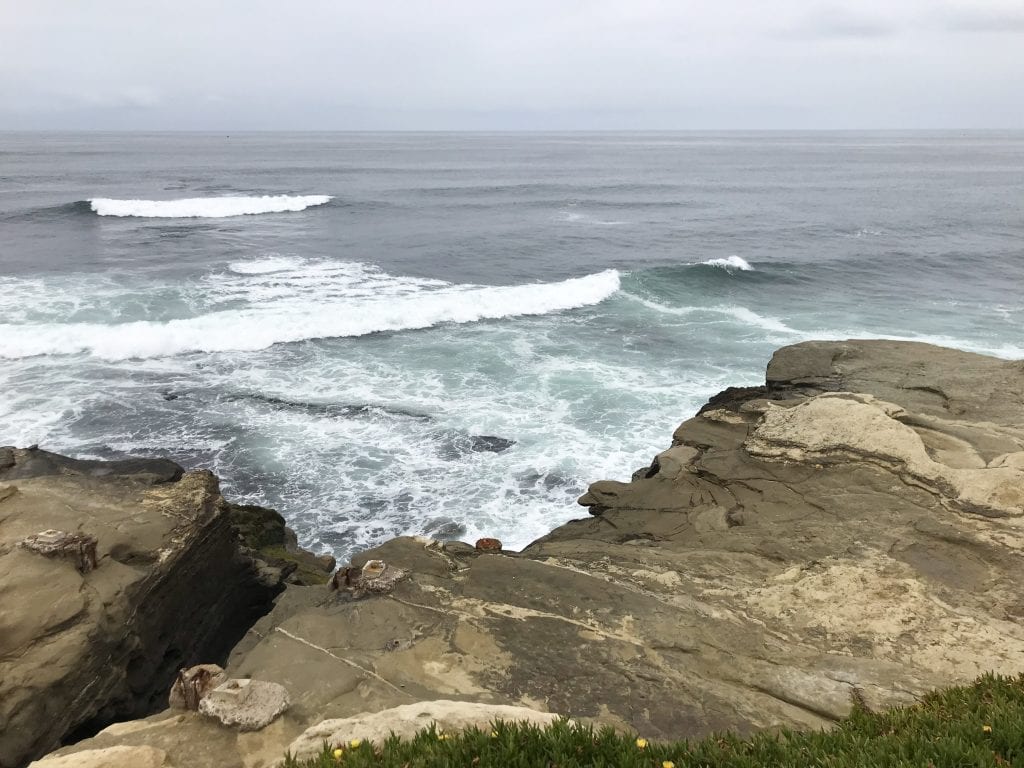 Flowers and plants add to the beauty of the area. 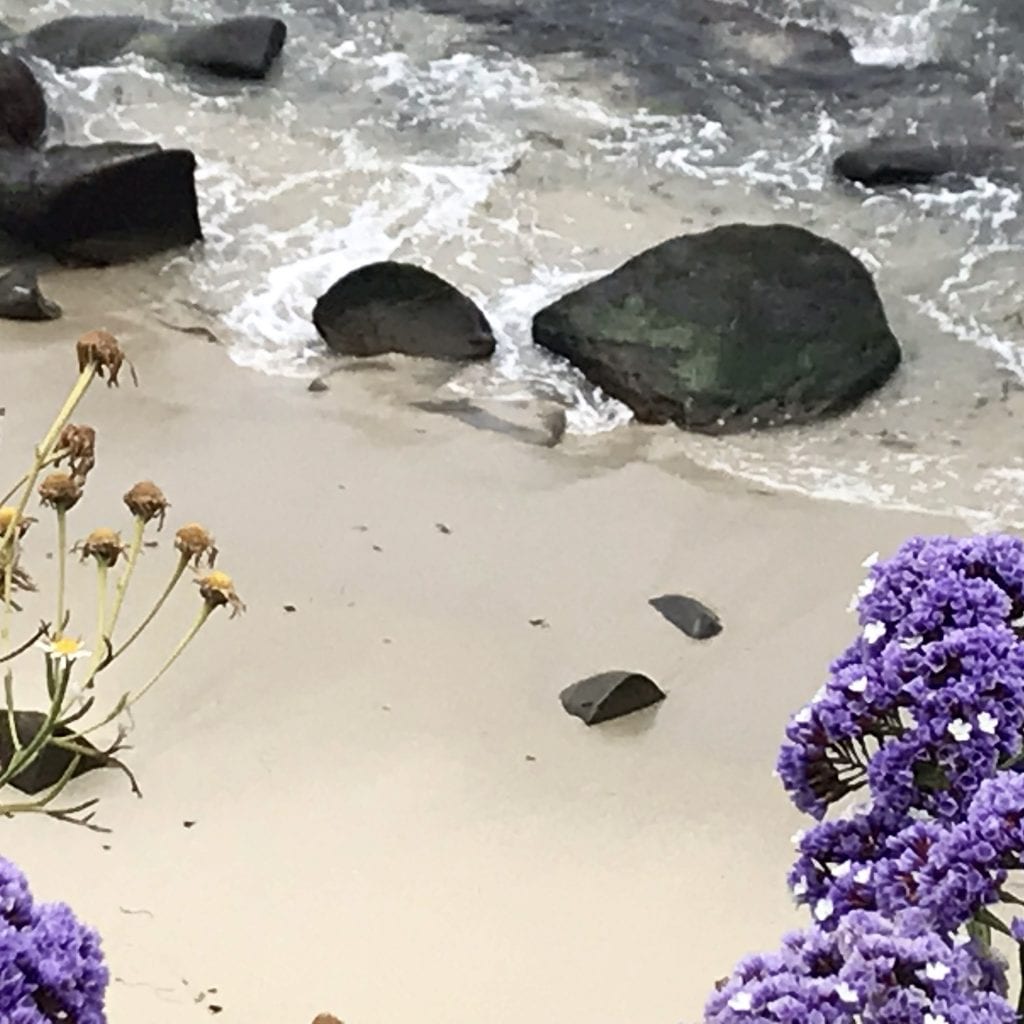 We strolled along watching the waves crash.  Soon we found some wildlife. 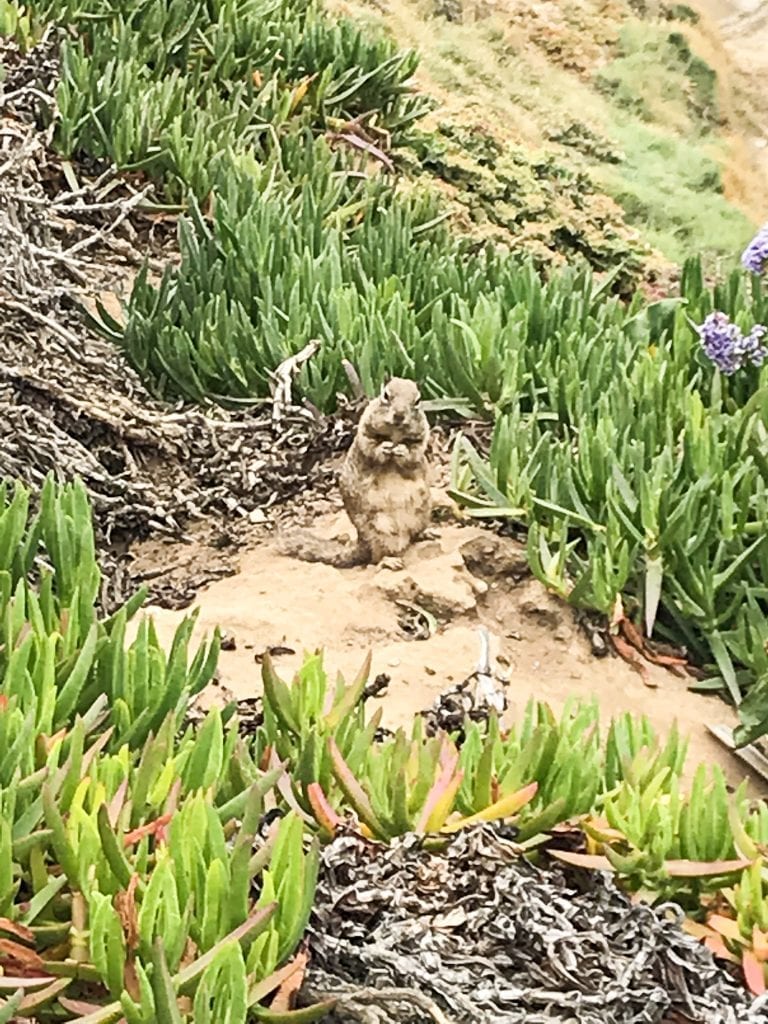 And we saw sea lions! 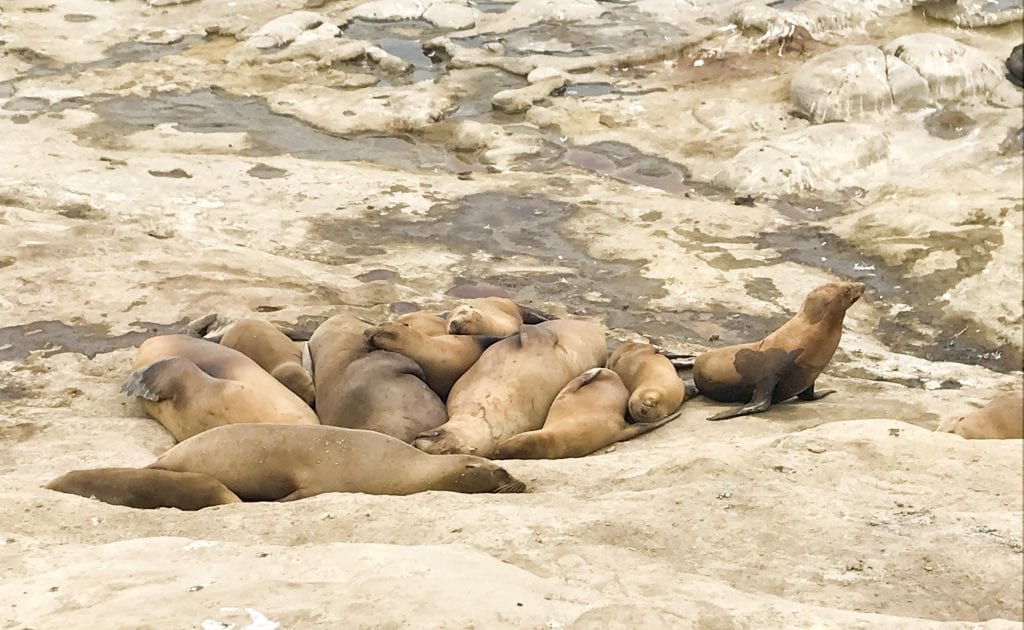 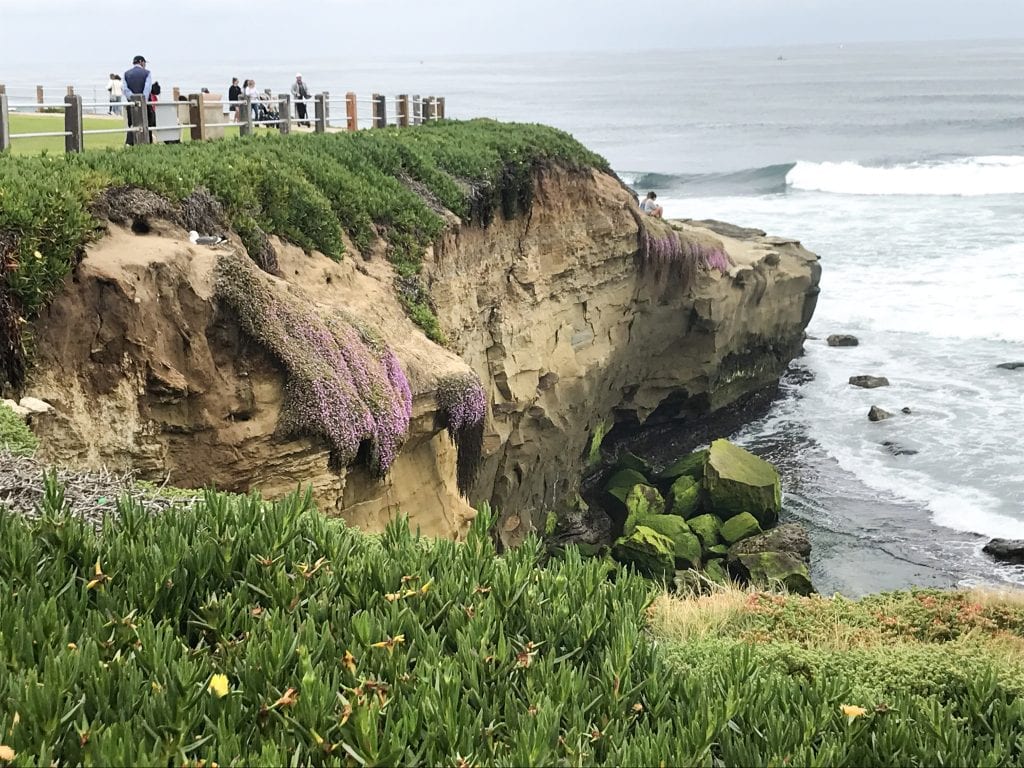 This area is nice for walking.  The walkway is paved, and you can sit on the grass or at picnic tables as you get closer to La Jolla Cove. 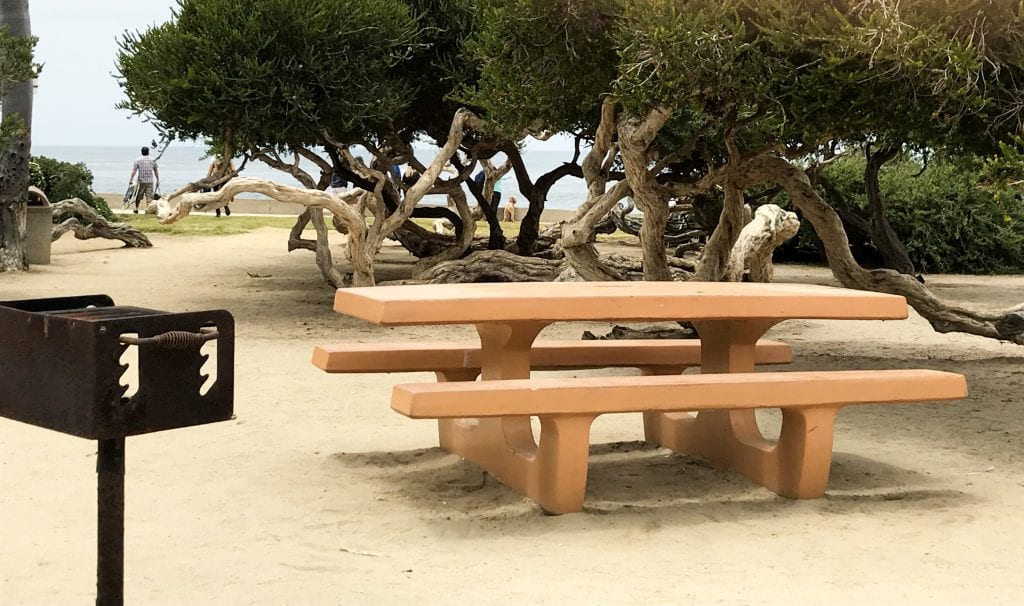 You can get off the path and get closer to the water.  Just be careful, the rocks may be slippery.  Also, be sure to keep a respectful distance from the sea lions and seals.  They are still wild animals, and they can be unpredictable.  Plus, the mothers will defend their young. 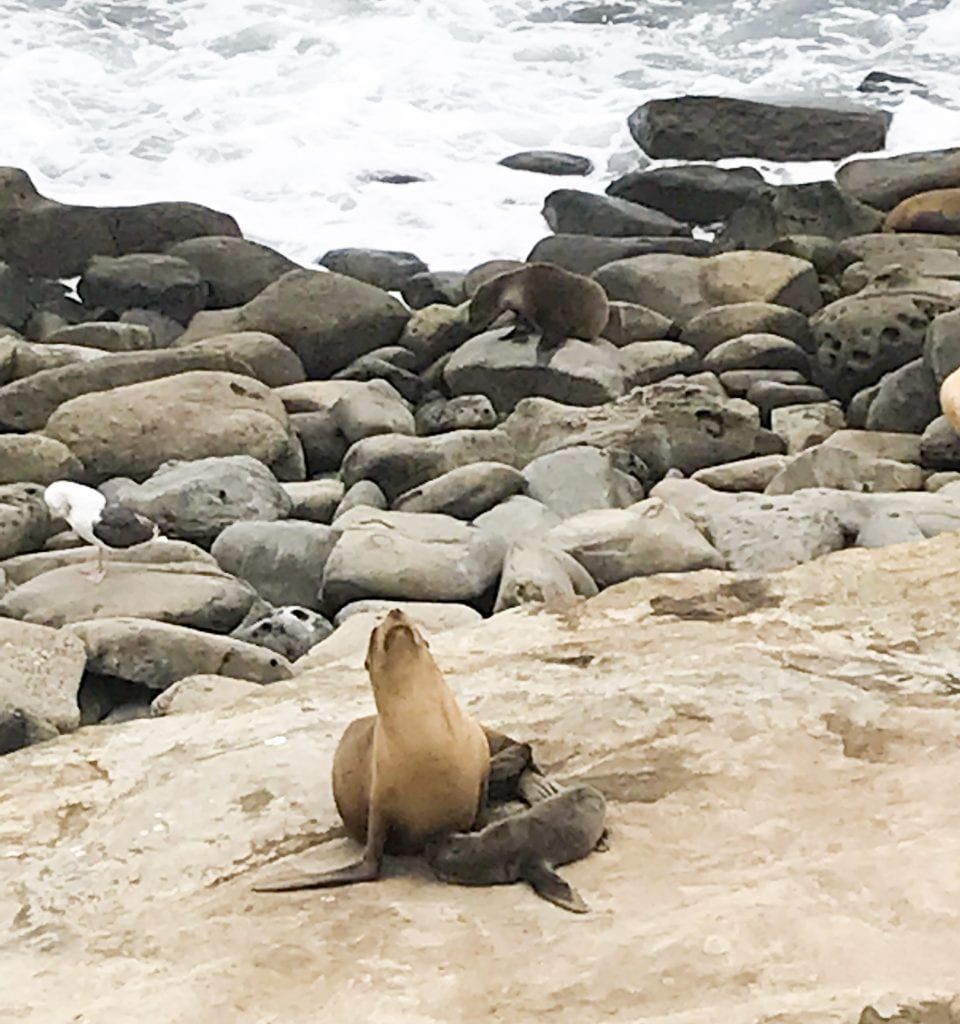 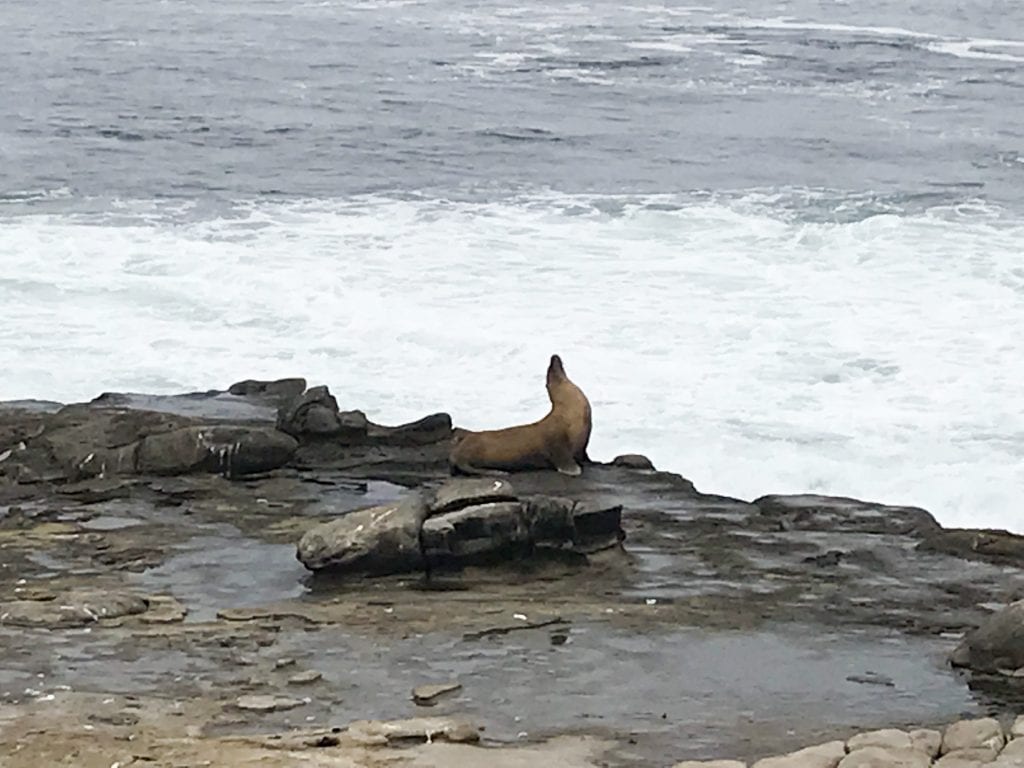 Differences Between Sea Lions and Seals

Speaking of the sea lions and seals, we enjoyed learning the difference between them. We mostly saw sea lions around the cove, but we heard that there are more seals near the Children’s Pool. 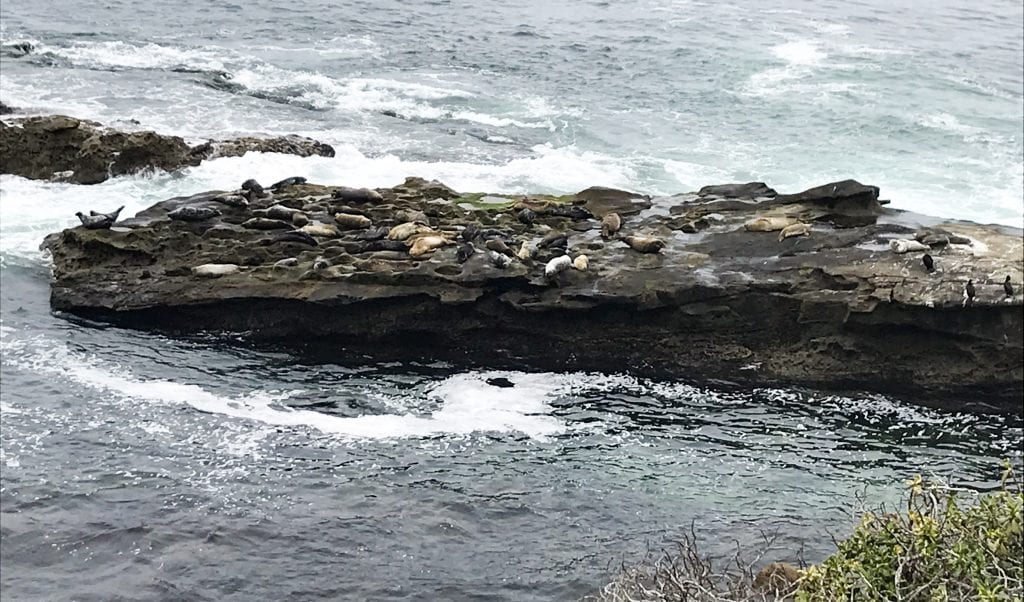 We also learned that sea lions are louder–they tend to bark.

They use their flippers to “walk” around on the rocks.  Seals move around more awkwardly on their bellies.  You can also look for the ear flaps on sea lions to distinguish them.  We’re no experts; when they are lying down or swimming, I really had to look closely. 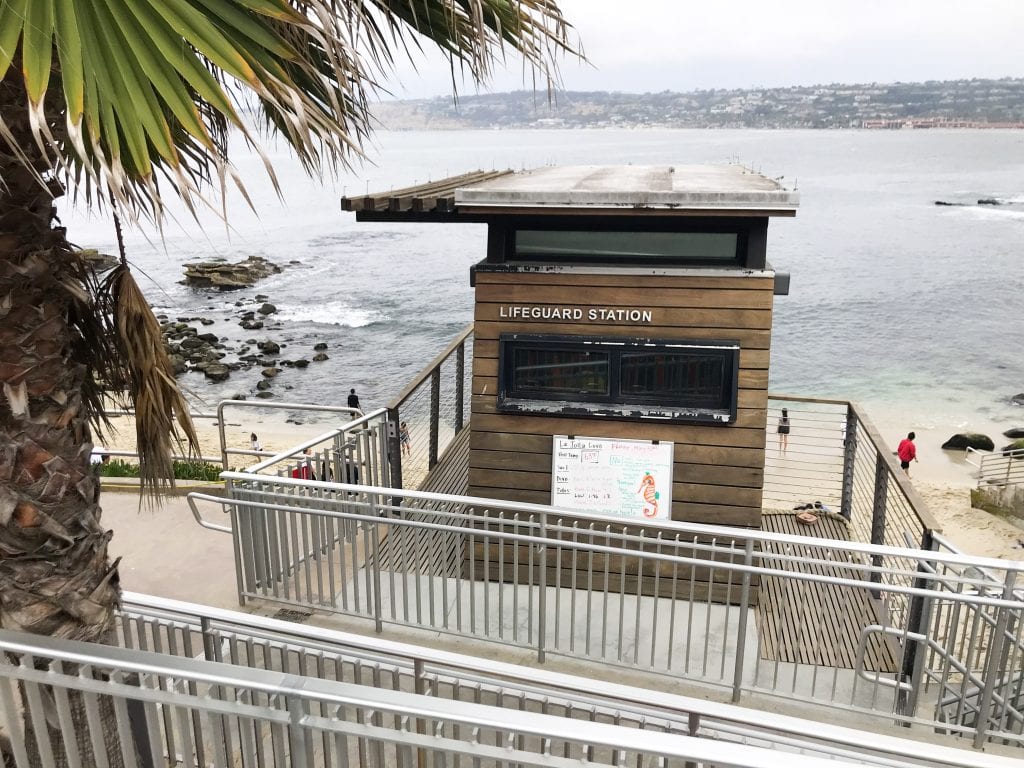 La Jolla Cove is a real happening spot.  We saw the most tourists here, and before we left, the lifeguards came to the station.  We also saw some SCUBA divers here. 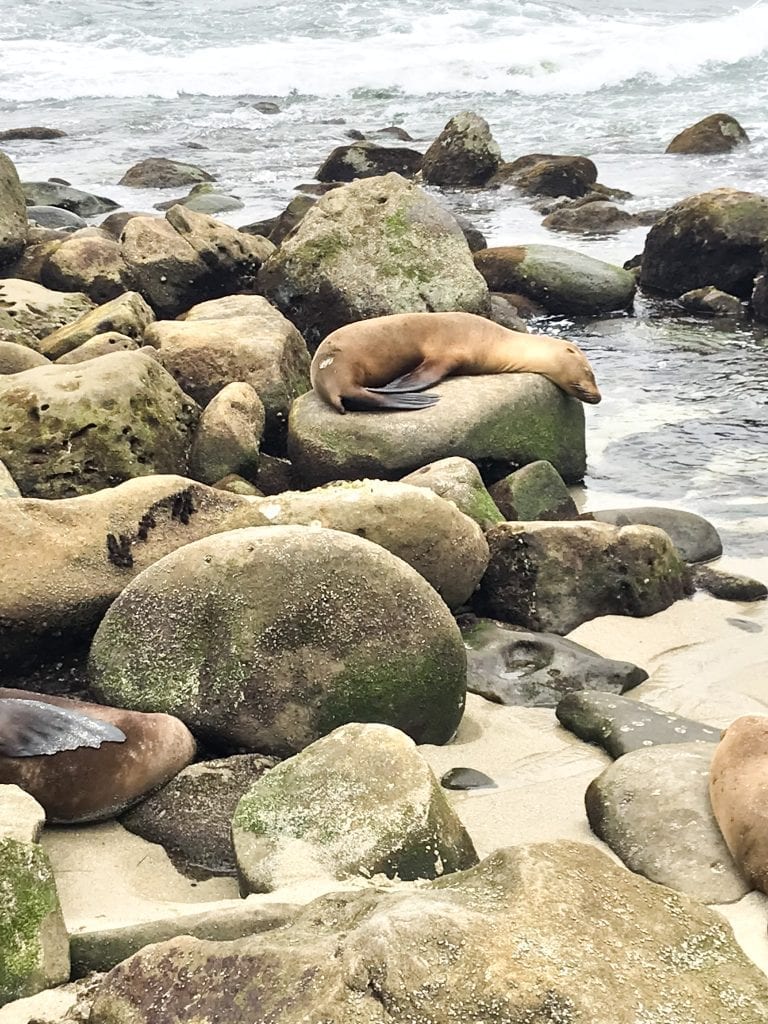 There is stairway access to the water here.  Again, just be mindful of the sea lions. 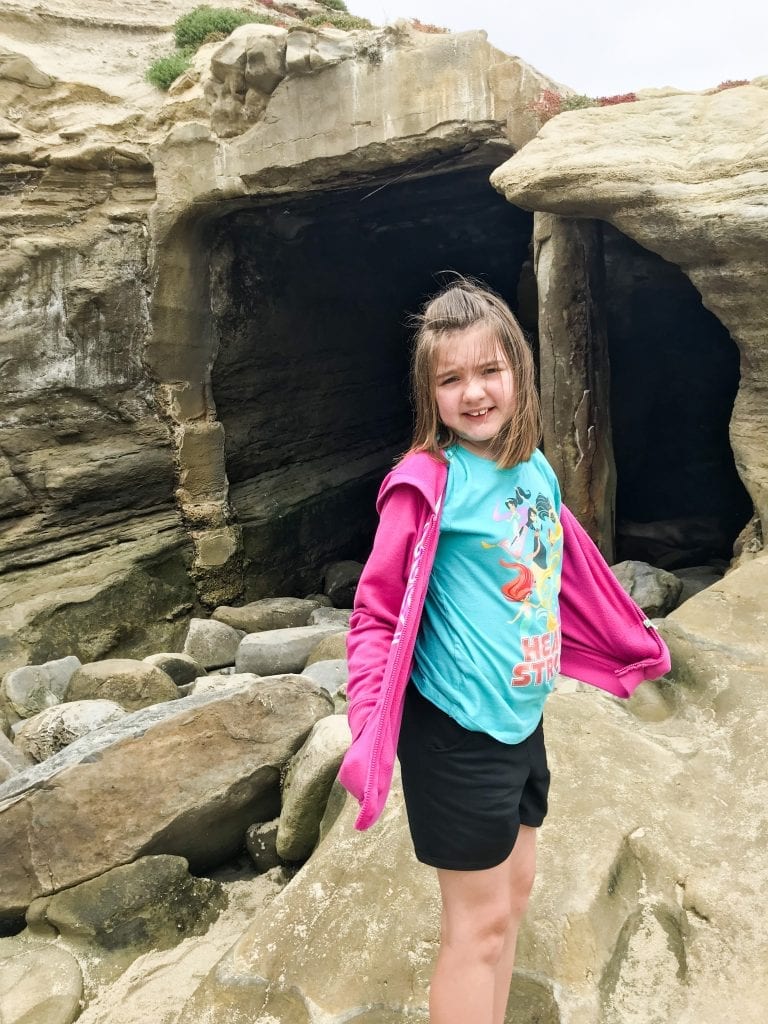 It’s also worth noting that there are some public restrooms and shower houses near La Jolla Cove.

After exploring La Jolla Cove for a while, we continued on towards the La Jolla Cave and the Store. 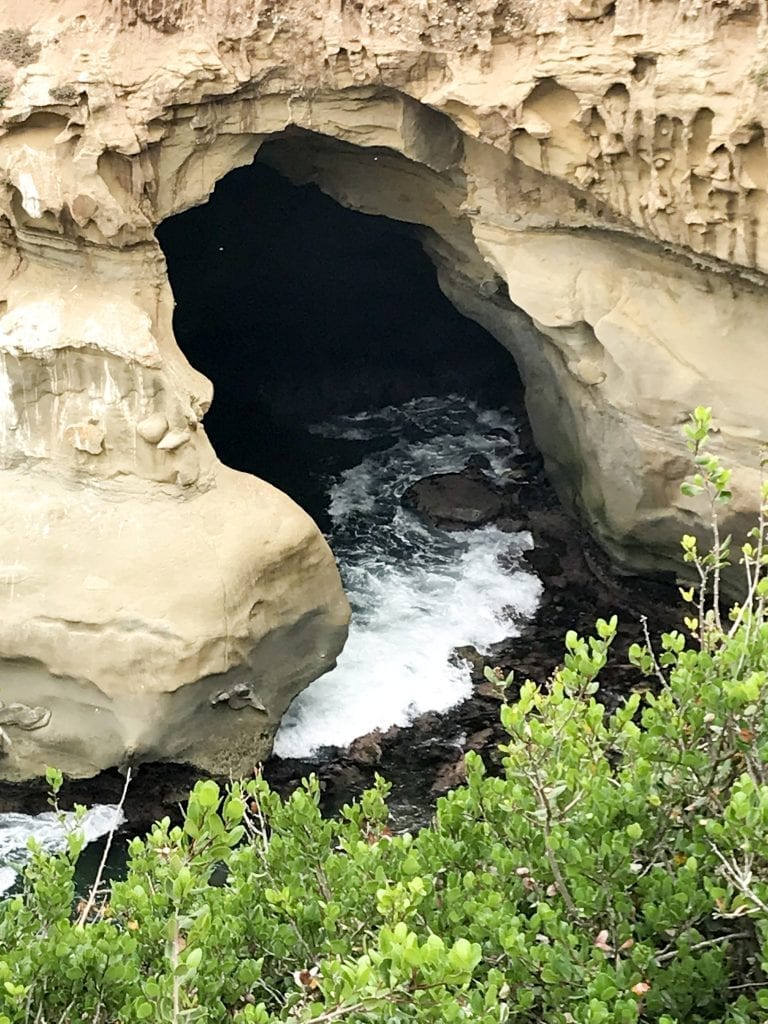 Though the cave looked cool, we opted not to pay the $5.00-per-person fee.  We did check out the store, and we found a great magnet for our collection. 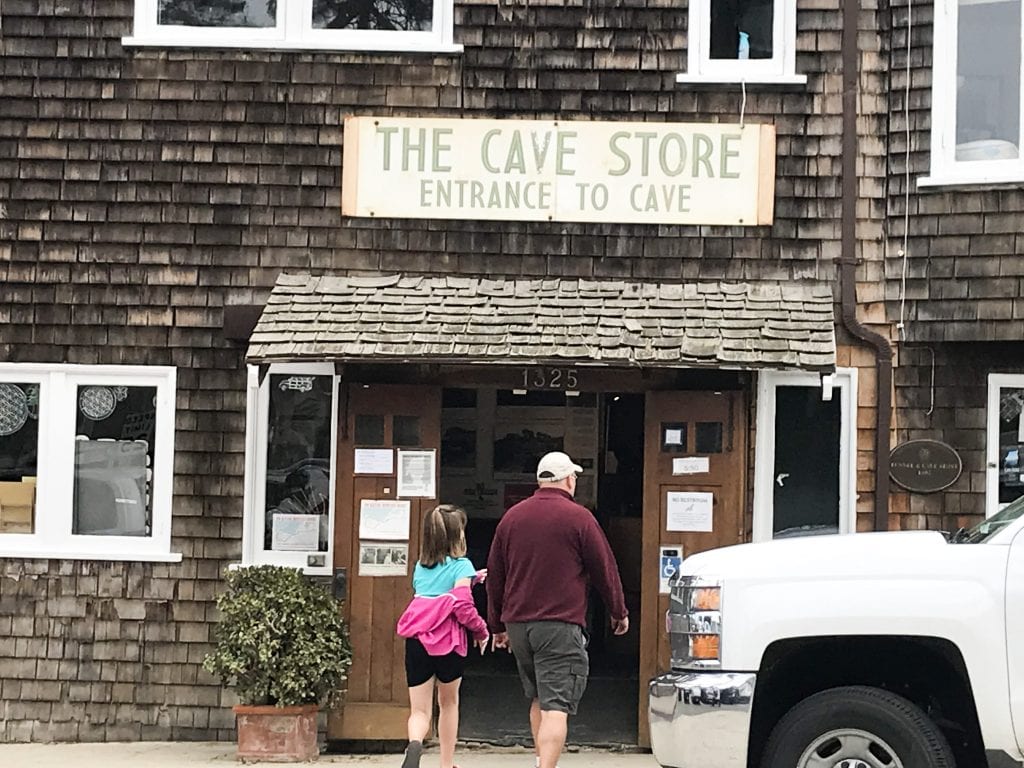 After visiting the store, we decided to backtrack and return to the car.  Since we only had one night in San Diego, we still had some other places to explore.  Plus, it was getting close to lunchtime.

We took some bench breaks on the way back, though, to take it all in one more time. 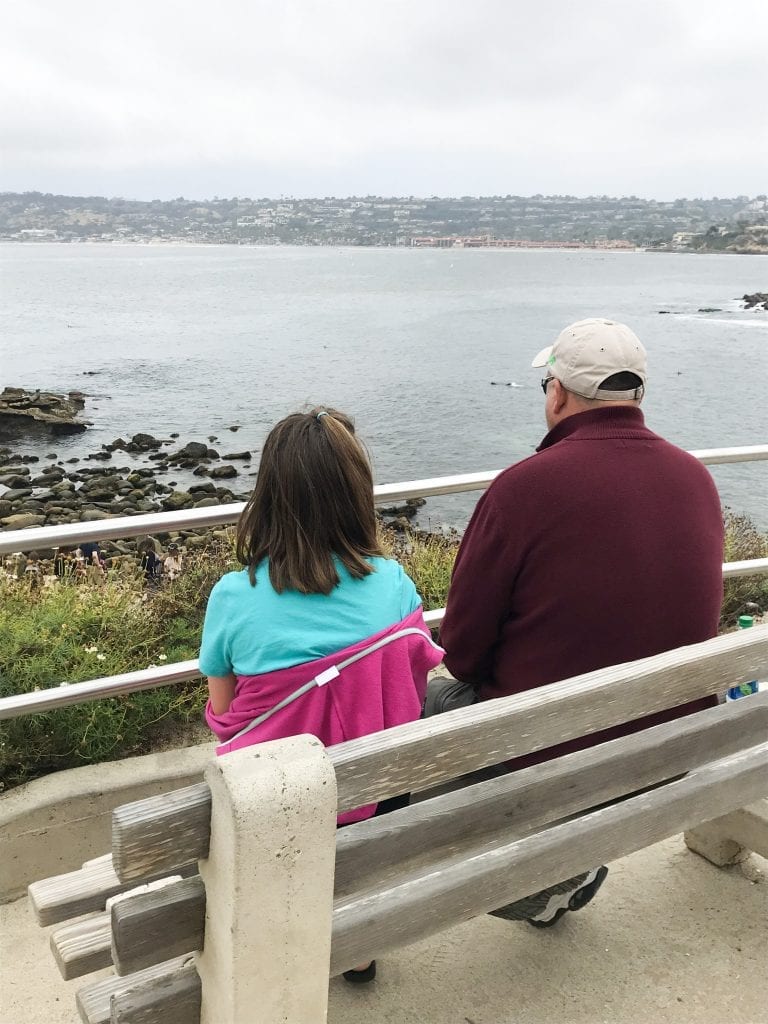 La Jolla was a great place for my family to visit.  We’d never seen sea lions or seals in the wild before, so we were amazed that they were just sitting on the beach or swimming around.  Our visit to La Jolla is definitely one of my favorite California memories.  I hope you’ll get a chance to see the La Jolla sea lions and seals in San Diego, too! 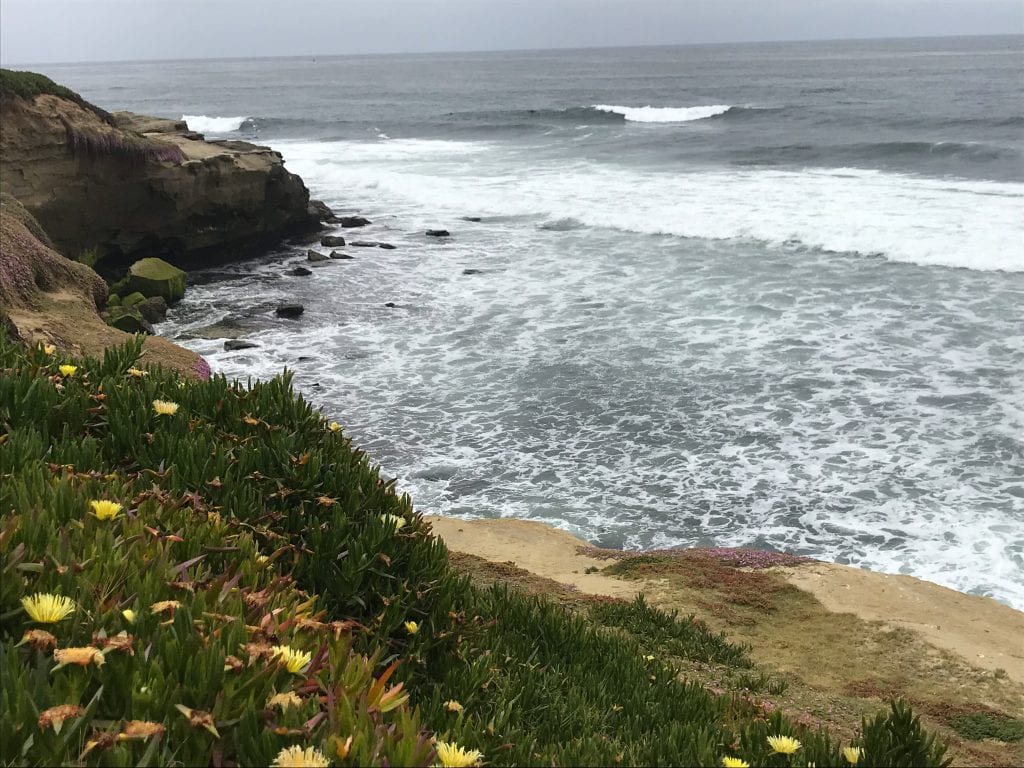 Read about another adventure we had in San Diego:  Ghosts and Gravestones Ghost Tour, including the Whaley House, in Old Town.

To read about another attraction in San Diego–the Morman Battalion Museum and Historic Site–click here! The post is provided by Lisa at Planning Away. 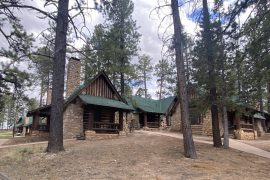 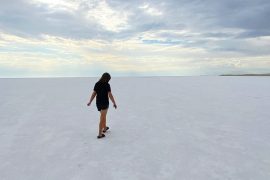 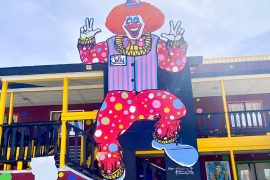