While many would probably disagree with me, T-Rex Café in Disney Springs is a great place for families, especially if your family has some eaters on the picky side who would love to have some food options that are familiar. While it is part of the Landry’s family of restaurants, T-Rex Café is now one-of-a-kind since the closure of the Kansas City location. And while you can find similar food options at either of the Rainforest Cafés or Yak and Yeti on Disney property, T-Rex Café is the only place where you can dine near animatronic dinosaurs. How cool is that?

Now that I’ve explained the coolness of T-Rex Café, I’ll tell you why this place should be one of your family’s Walt Disney World must-dos!

If you’re planning to take some time away from the parks or your resort, Disney Springs is a great place to get Disney vibes while shopping and dining. It’s also a great place to spend “arrival day.” There is no cost to visit or park, and you can take Disney buses from your Disney resort if that is more convenient for your family. If you’re staying at one of the Port Orleans resorts, you can take a boat. And if you’re staying at Saratoga Springs, you may just want to walk over.

There are so many wonderful options for dining in Disney Springs, and many of them are great for families. One of the Rainforest Cafés is located there, and we’ve also had a great time at Raglan Road. Click here to read about our experience there. However, T-Rex Café is the restaurant we’ve visited on every one of our Disney trips. Next to Chef Mickey’s, it’s Kristin’s favorite. 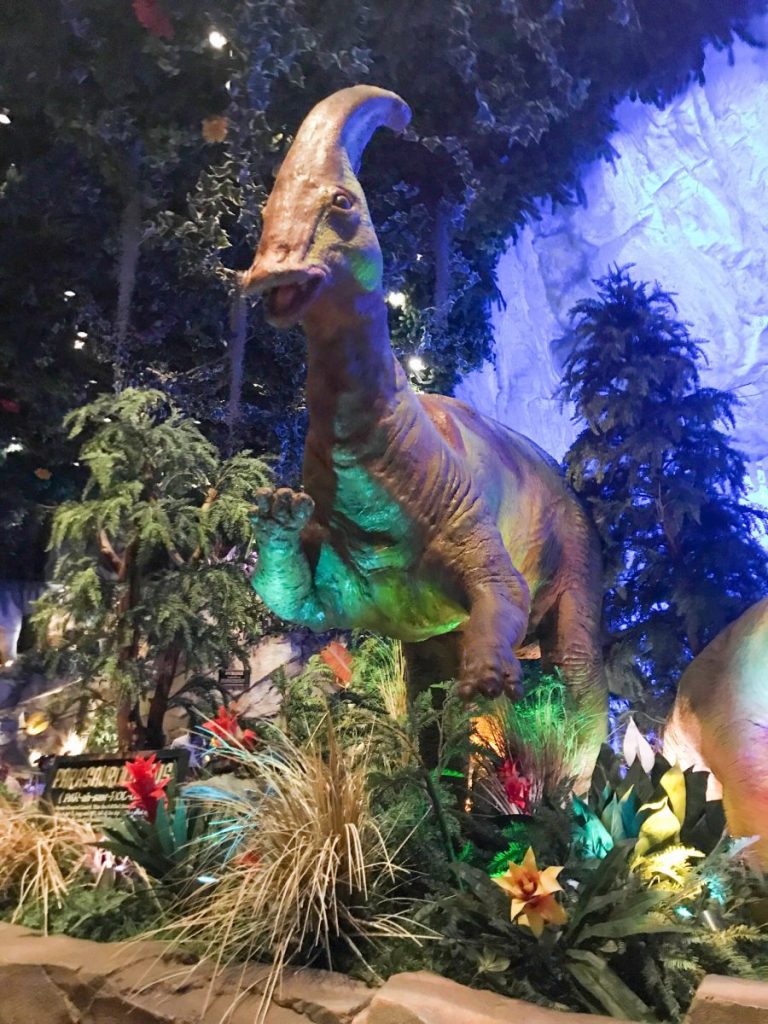 This is probably a no-brainer if you’re considering this restaurant, but the animatronic dinosaurs are cool. While this fact may be frightening for some children, many love walking into the world of dinosaurs. Be aware that, like Rainforest Café, these creatures move and make noise. Every once in a while, there’s a meteor shower, and the Ice Cave changes colors. This commotion may make some kids anxious; you may have to feel it out and see how it goes. 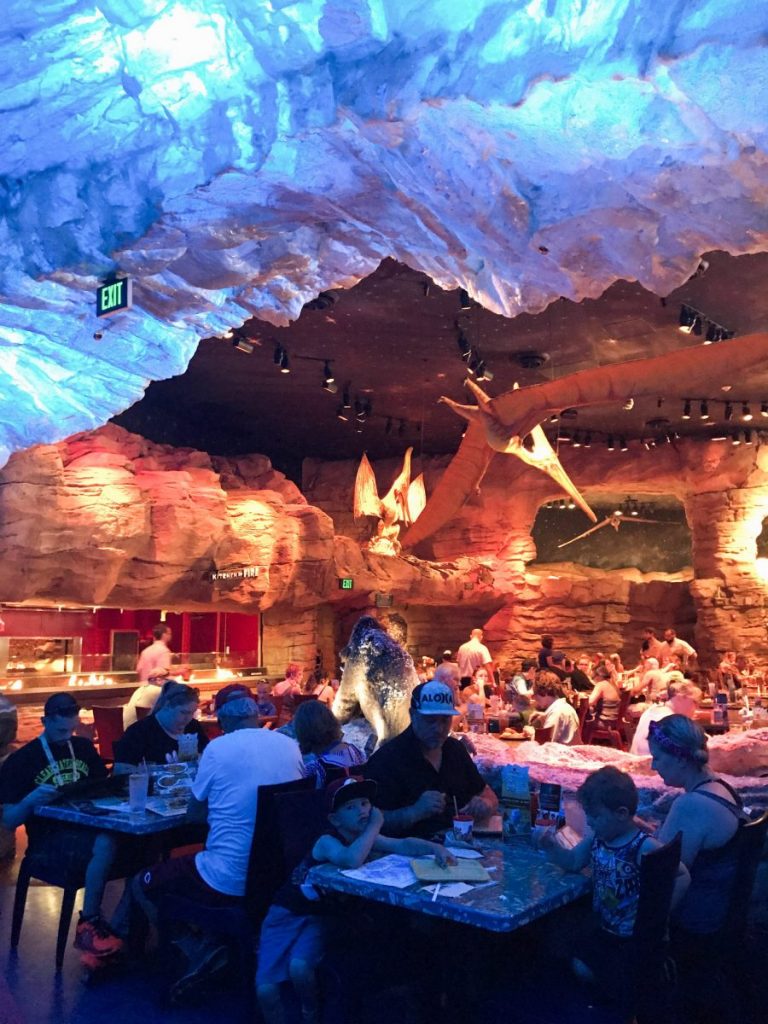 Kristin has always wanted to “take walks” while waiting for the food to arrive. We usually make a trek to the bathroom and check out any dinosaurs that are away from other guests. 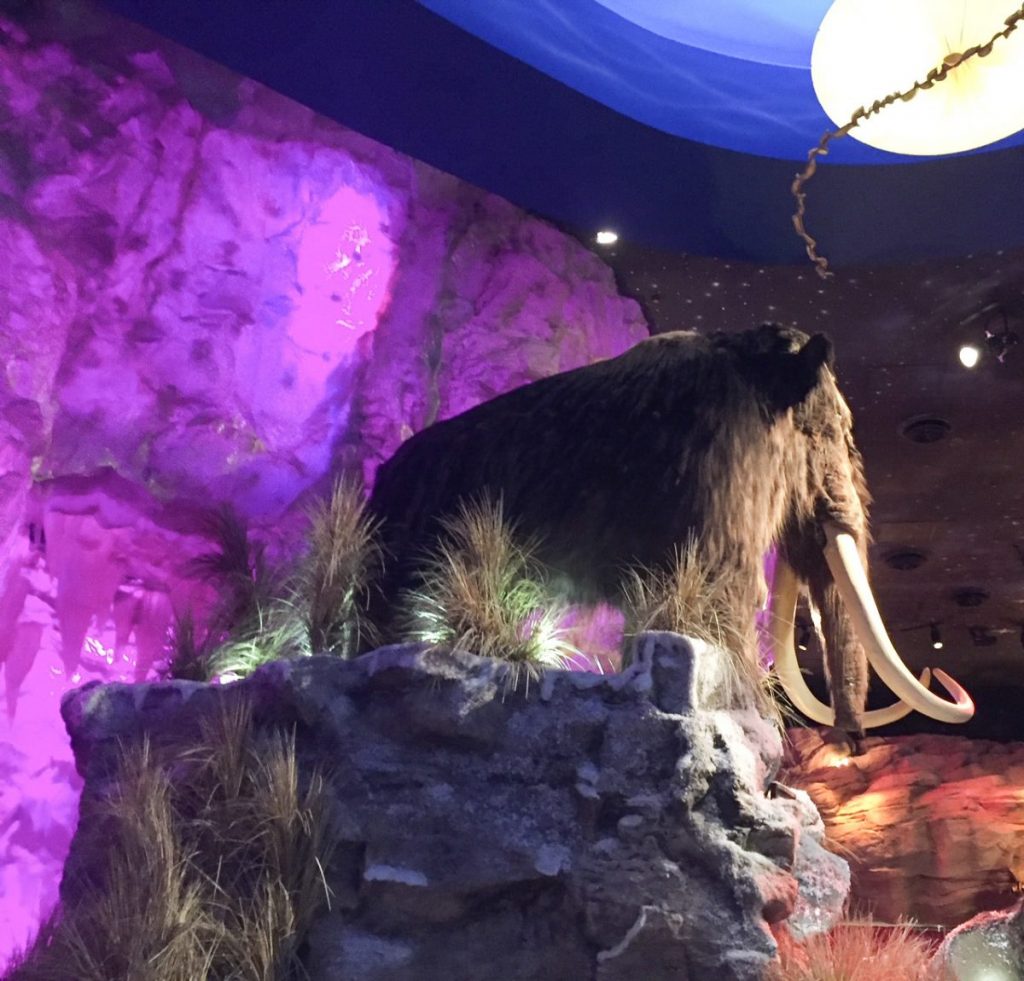 You can also check out the aquariums near the bar. 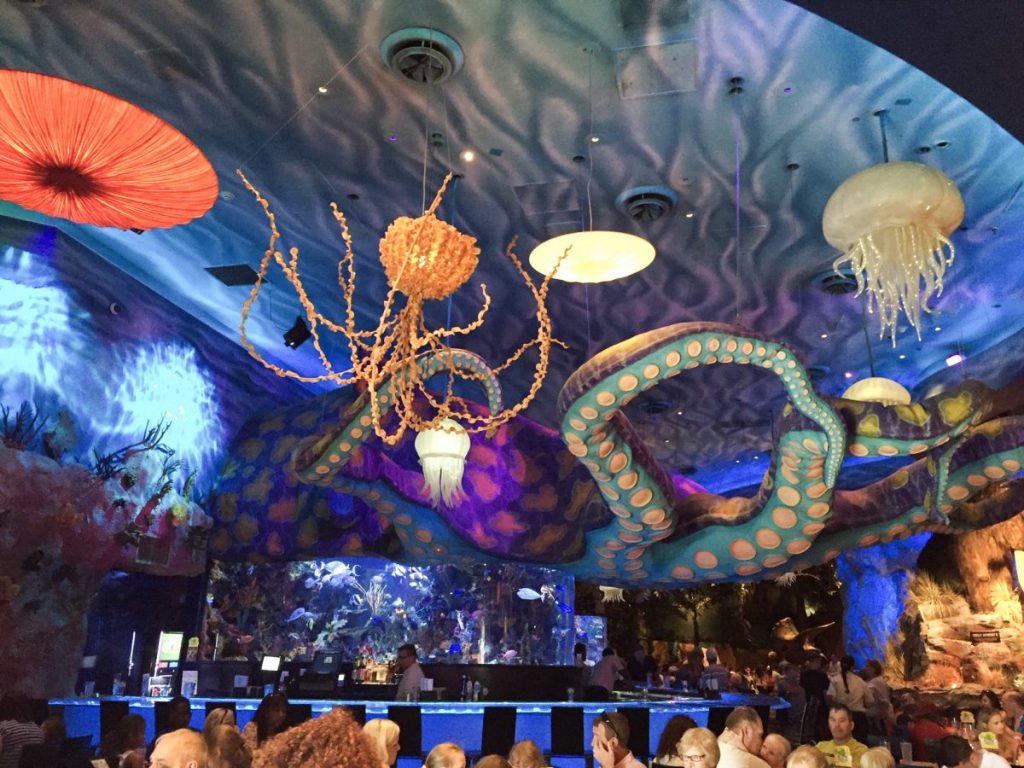 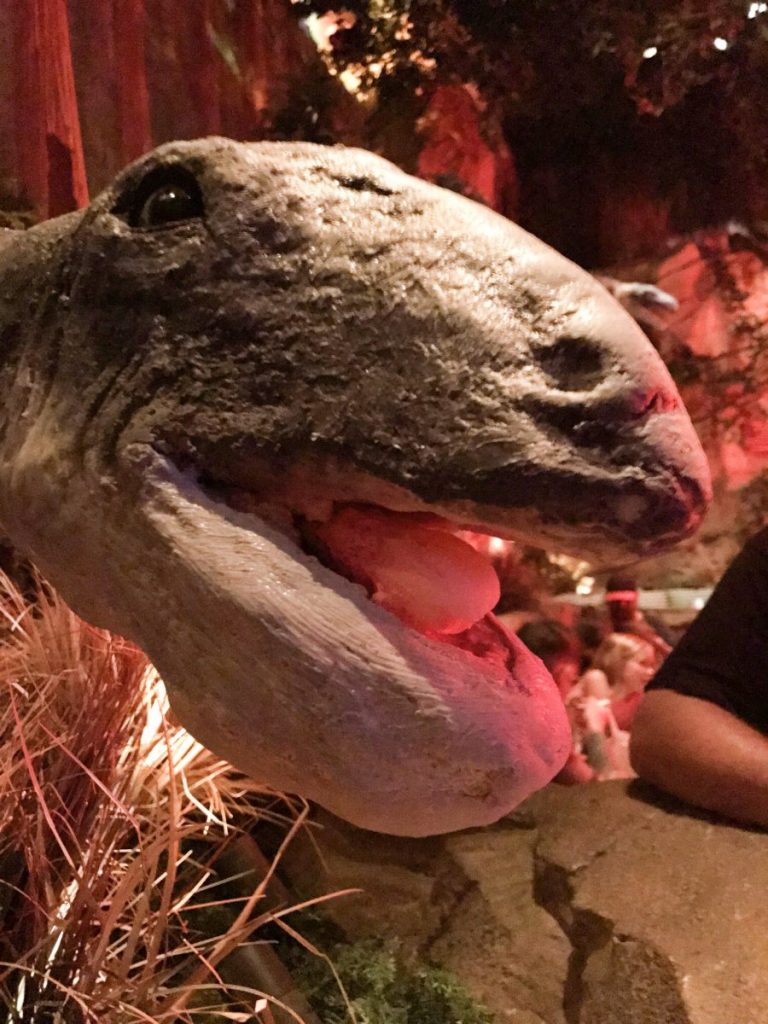 You Can Sit in the Ice Cave 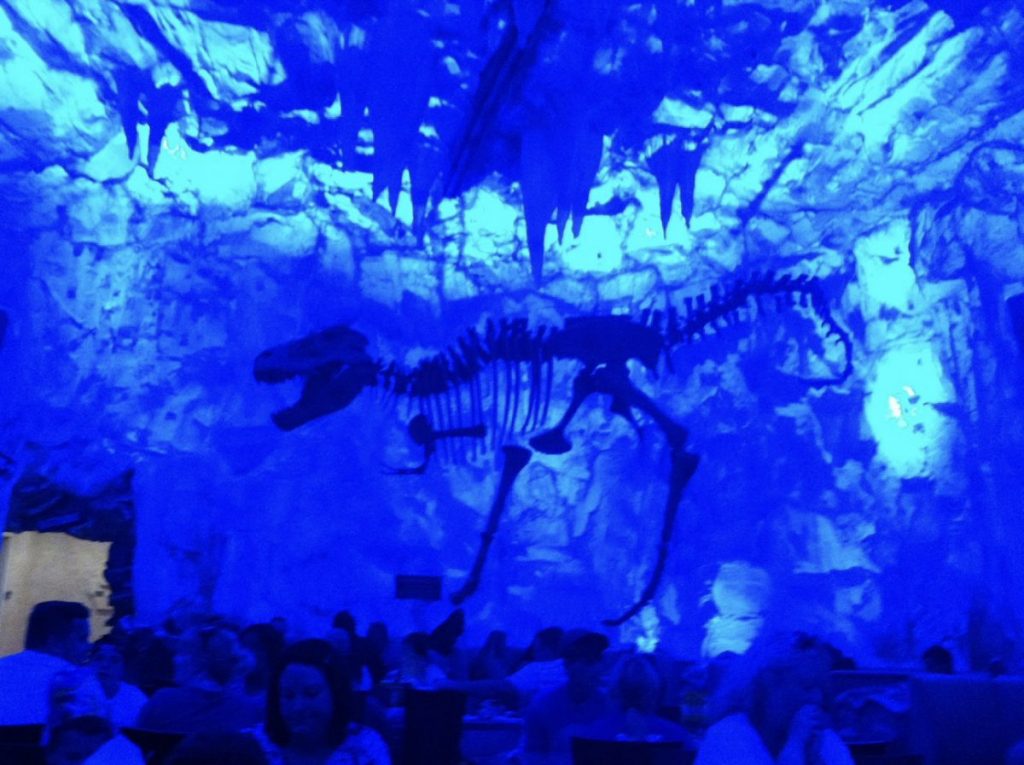 We’ve been lucky enough to sit in the Ice Cave a couple of times. Below is one of our visits. Kristin is posing with her collectable dinosaur Icee cup and her cardboard dinosaur hat. 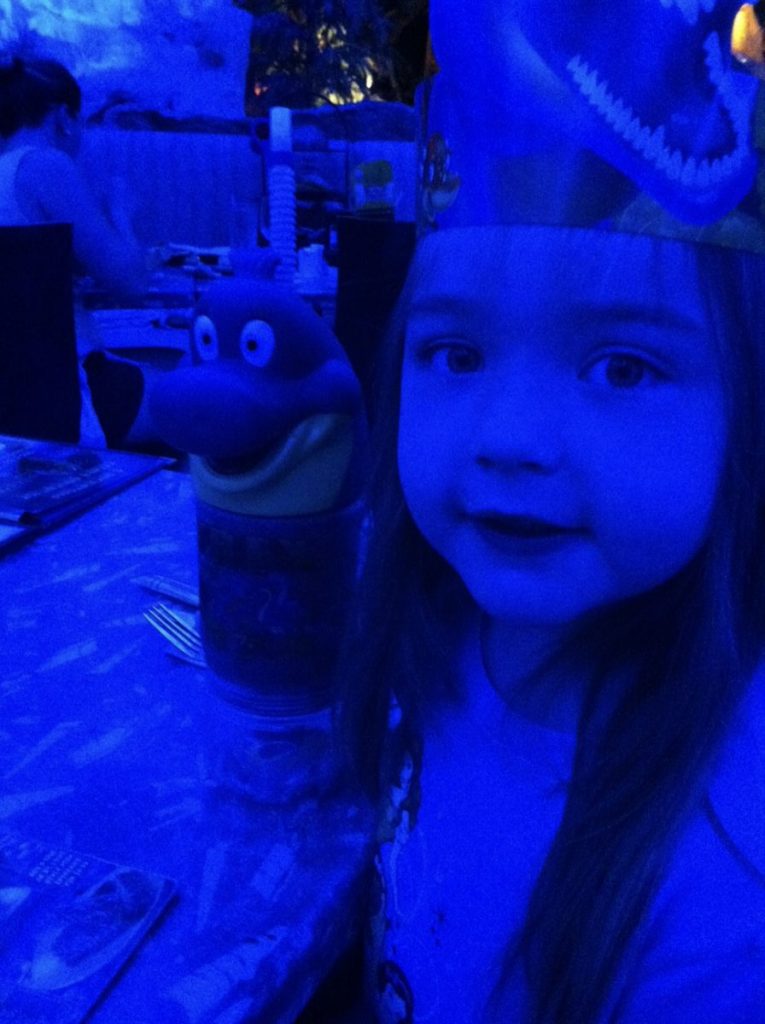 A few years later–not much changed. 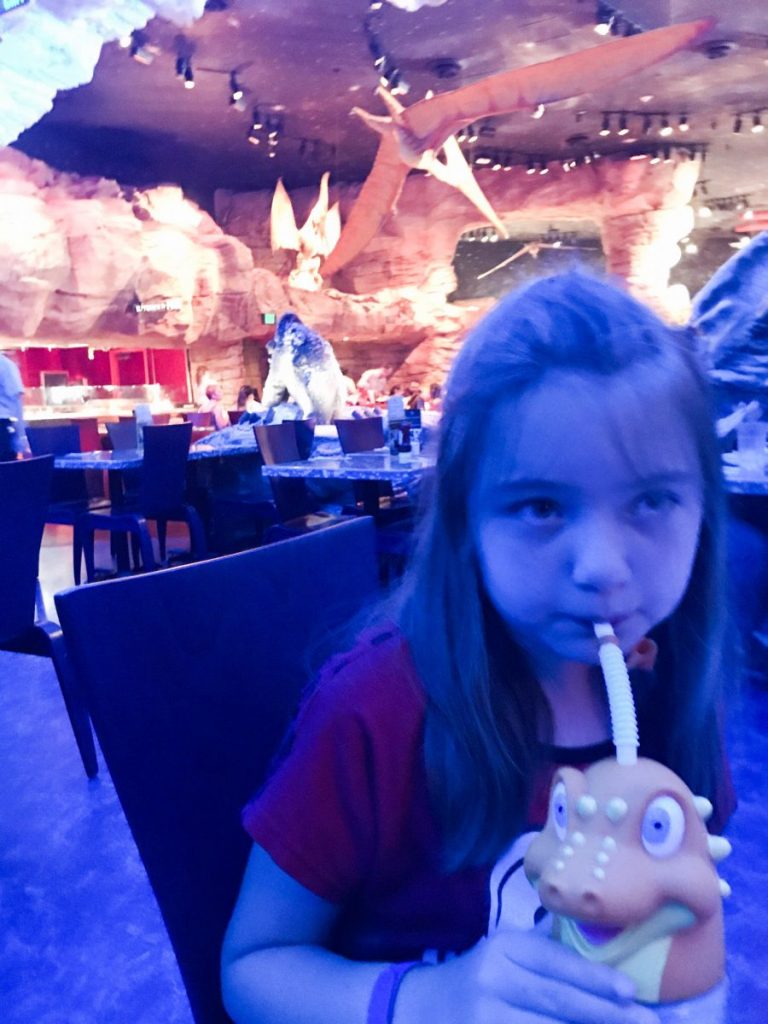 The Ice Cave isn’t always blue, though. Sometimes it’s red. I guess all ice ages come to an end. 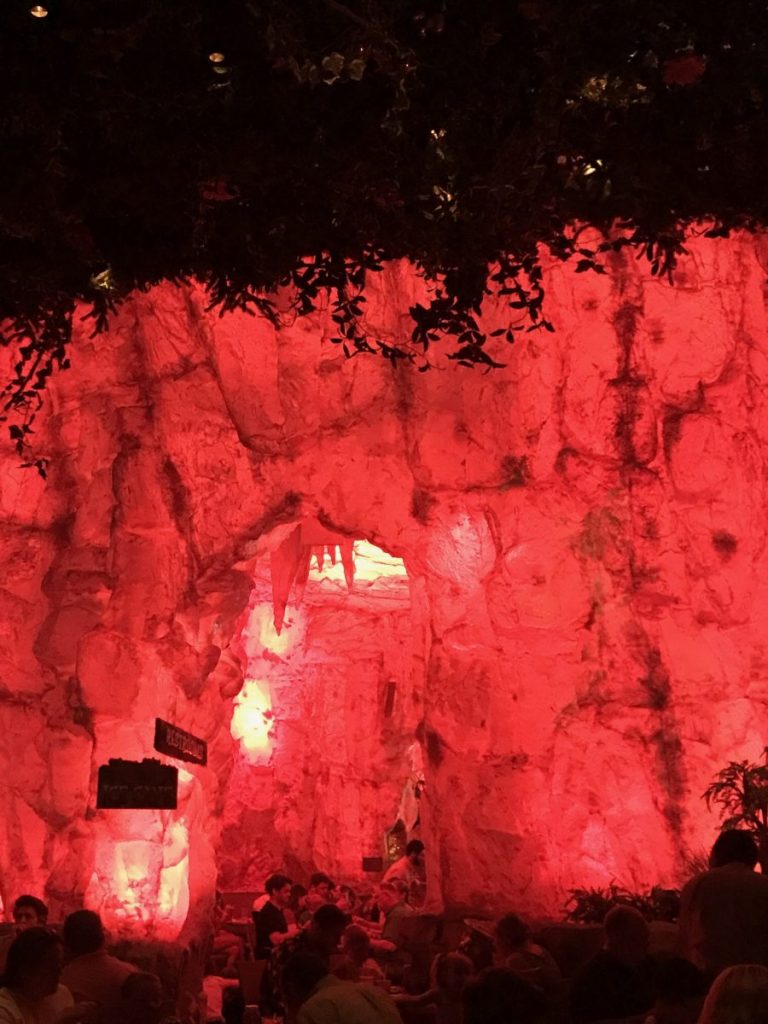 The Food at T-Rex Cafe is Perfect for Picky Eaters

There are plenty of options that are more geared for adventurous eaters, though I wouldn’t call anything gourmet. Still, sometimes it’s reassuring that there are some standard choices that picky eaters will enjoy. Jeff counts the hamburgers from the Landry’s family of restaurants among his favorites. Here is a plain double hamburger with waffle fries. 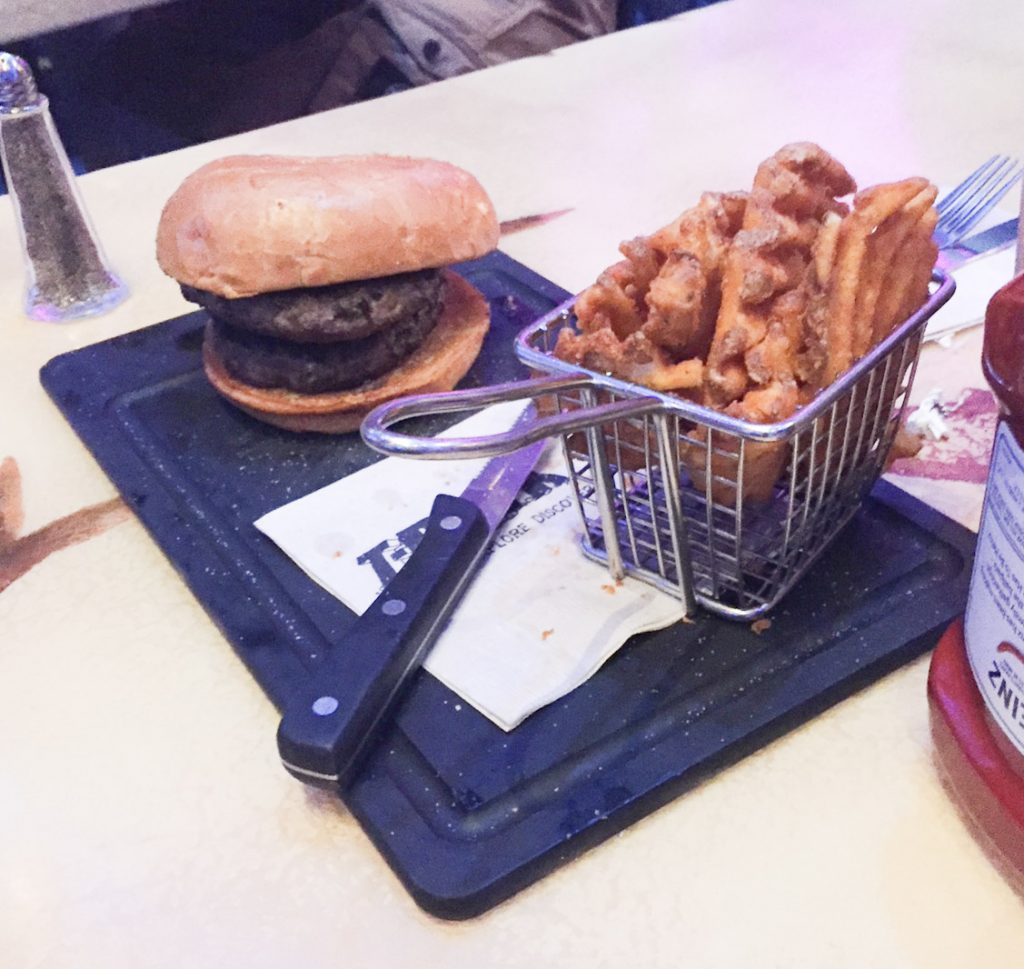 And Kristin enjoyed her dino-chicken nuggets. 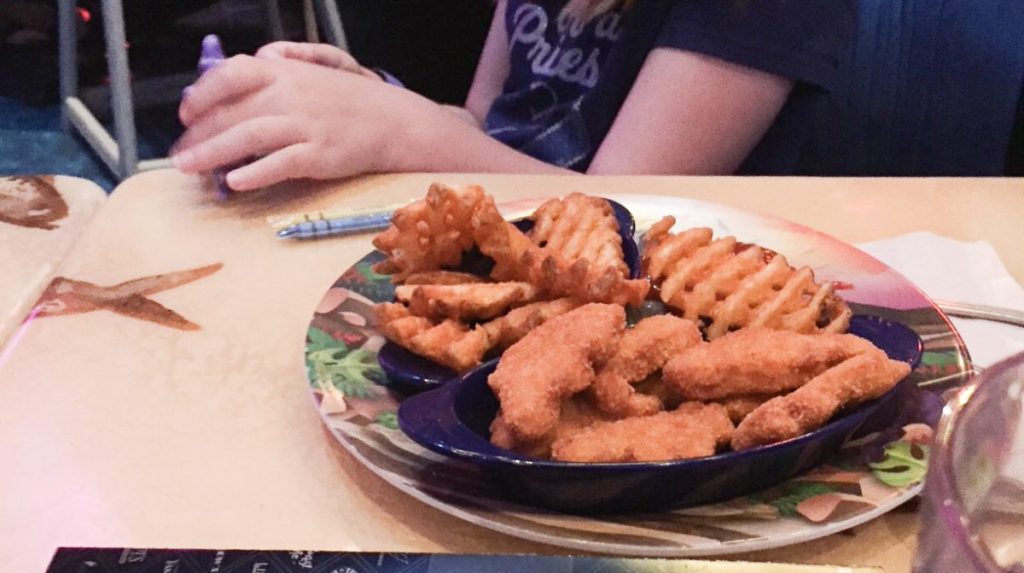 I’ve tried various things over our visits including nachos and pasta. Somehow, I don’t have pictures, but I’ve never had anything I didn’t like.

During one visit, we were there during Jeff’s birthday month. They surprised us with a birthday cupcake. We didn’t mention it, but they knew when we used our birthday rewards from Landry’s Select Club. More on that in a moment. 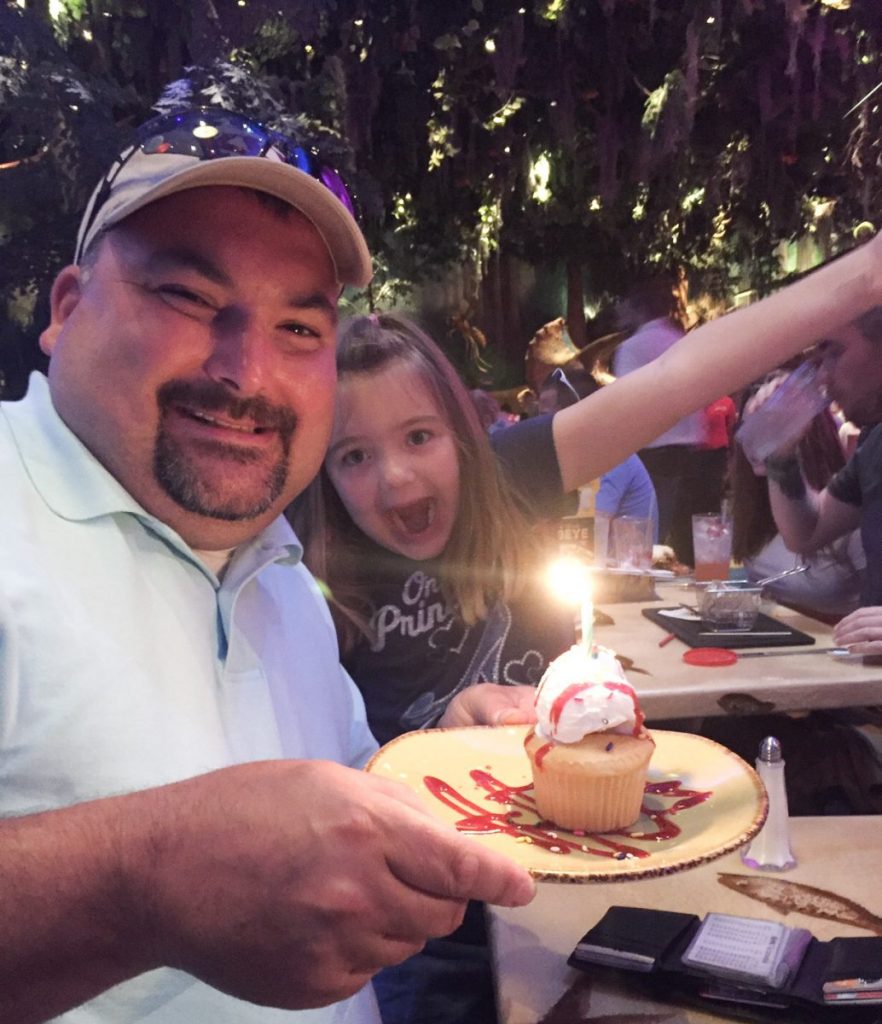 T-Rex Café is Part of the Landry’s Select Club

Jeff and I each have our own memberships with Landry’s Select Club. We aren’t affiliates or anything, in fact, we became members well before we started blogging. We just really enjoy the birthday perks.

When you sign up, there is a $25 fee to become a member. The great part is, you get to use that $25 at your next visit at a Landry’s family of restaurants location. You also get $25 to use every year in your birth month. Since we both have summer birthdays, and summer is generally when we travel, this birthday perk is amazing.

We’ve used it at T-Rex Café, Rainforest Café, and Yak and Yeti at Walt Disney World. We’ve also used it several times at Saltgrass Steakhouse and Joe’s Crab Shack, both on the Branson Landing in Branson, Missouri. There are numerous options, so even if you don’t think you’ll get to Walt Disney World often, there are a lot of places to use the membership. Jeff and I have even both used our rewards on the same visit to a restaurant since you also get to use the perk up to two weeks after your birthday month. We just get separate checks.

Be sure to show the card when you check in to the restaurant. You’re also supposed to be able to jump the line ahead of people waiting for a table. I will mention that I always make reservations, or ADRs as Disney calls them, in the summer at Walt Disney World, no matter which restaurant we choose while there. If you can’t get a reservation on the Walt Disney Dining site, you can call a Landry’s branded restaurant directly to check for openings. I’ve gotten a few reservations this way.

Also, apparently you do earn rewards on purchases. We’ve never really acquired enough points this way to redeem any. If you live closer to a Landry’s branded restaurant, you may be able to use this perk. For us, the birthday perk was enough to sell us on the deal.

They Have a Gift Shop and a Build-a-Dino Workshop 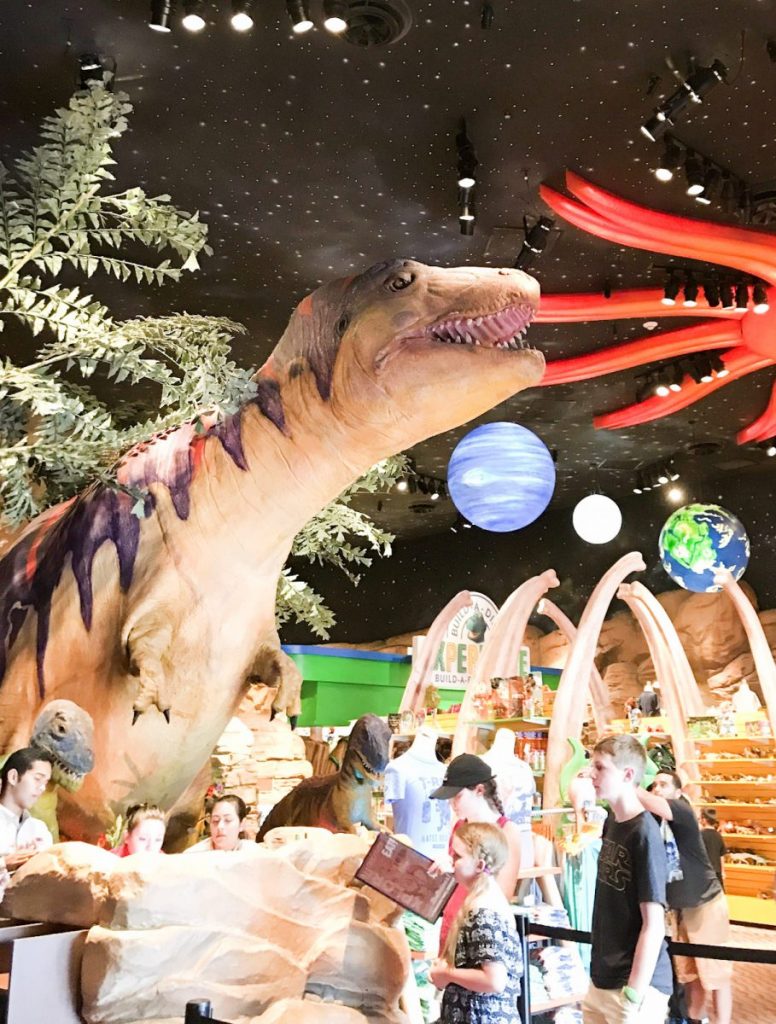 This may not be a plus for parents, but I think it’s worth knowing ahead of time what you will encounter in case you need to remind kids that you may not necessarily be building a dinosaur or making any other purchases while you’re in the gift shop. It’s always fun to look, though. And if your kid is really into dinosaurs, this may be the place they decide to pick out that special souvenir.  I’m just giving you the info.

And That’s Why You Should Eat at T-Rex Café

Though this may not be everyone’s idea of the perfect meal at Disney, it’s one of my family’s favorites. The atmosphere is fun, and my picky eaters don’t have to worry about the menu. At the same time, I don’t have to eat a hamburger or chicken strips. Yay! After eating here, usually on arrival day, we really love walking around Disney Springs and checking out the shops. We’ve also come to Disney Springs a couple of times for an afternoon break away from the parks. T-Rex Café is a fun option to consider as you plan your Walt Disney vacation.

Other great family options for dining at Walt Disney World: 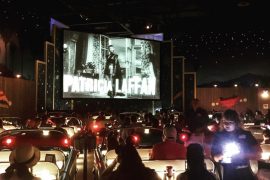 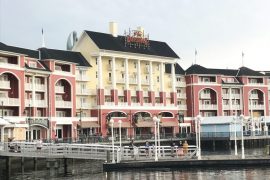 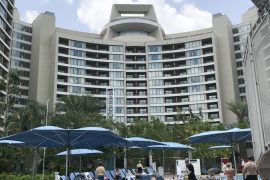