If you’re planning a trip to Southwest Missouri, be sure to include a visit to Wilson’s Creek National Battlefield. This Civil War battlefield is located near Springfield and just about a half-hour from Branson. It’s a great experience for history lovers and those who love the great outdoors; it’s a great addition to your trip to the Ozarks.

We’ve been a couple of times now, both in the summer, though not this summer. My summer advice is to always go early, if you can, to beat the heat.

Contents
1 Begin Your Adventure at the Wilson’s Creek Visitor Center
2 Experiencing the Story of the Battle of Wilson’s Creek
2.1 The Ray House
2.2 East Battlefield Overlook
2.3 Bloody Hill
2.4 Totten’s Battery and the Route of Union Advance and Withdrawal
3 After the Battle
4 Other Civil War-Related Destinations

Begin Your Adventure at the Wilson’s Creek Visitor Center 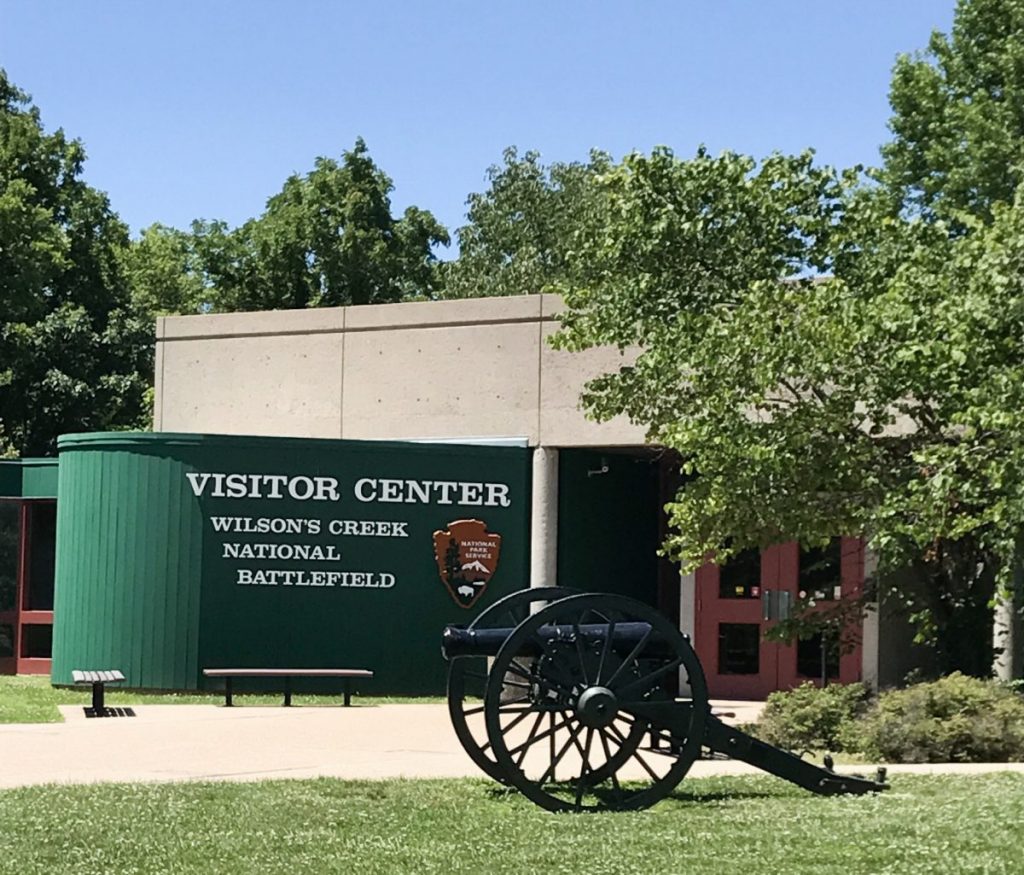 Like most places that are part of the National Park Service, the visitor center is a great place to learn a little background and orient yourself to the park. I love the park vehicles parked out front. 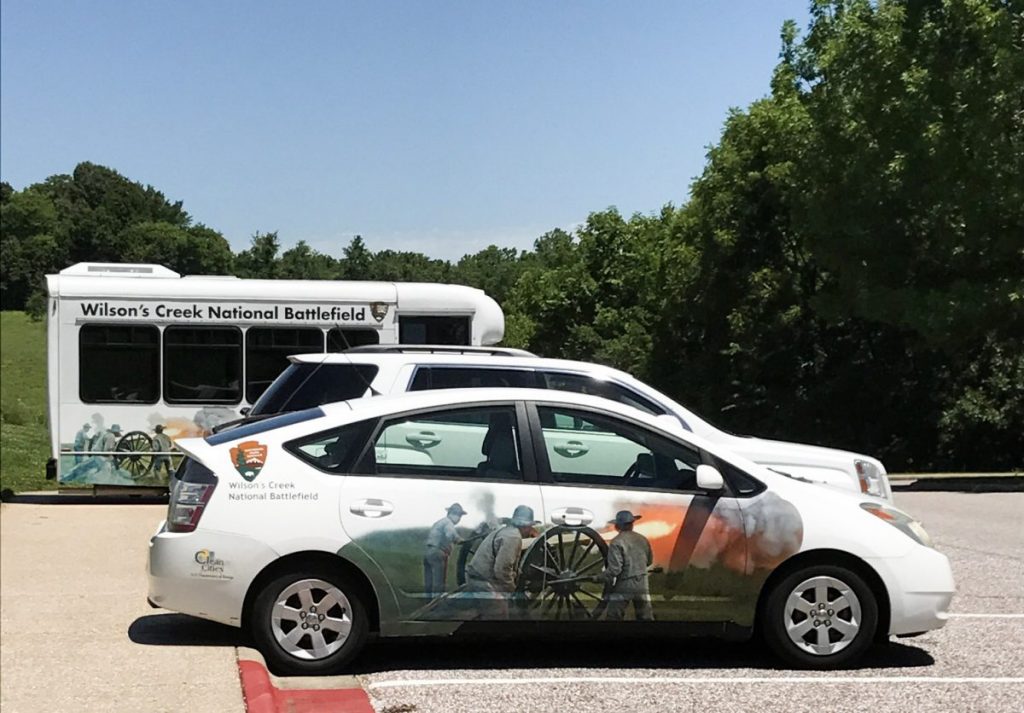 You can also pay your visitor fees and purchase any souvenirs. My family always gets a magnet. 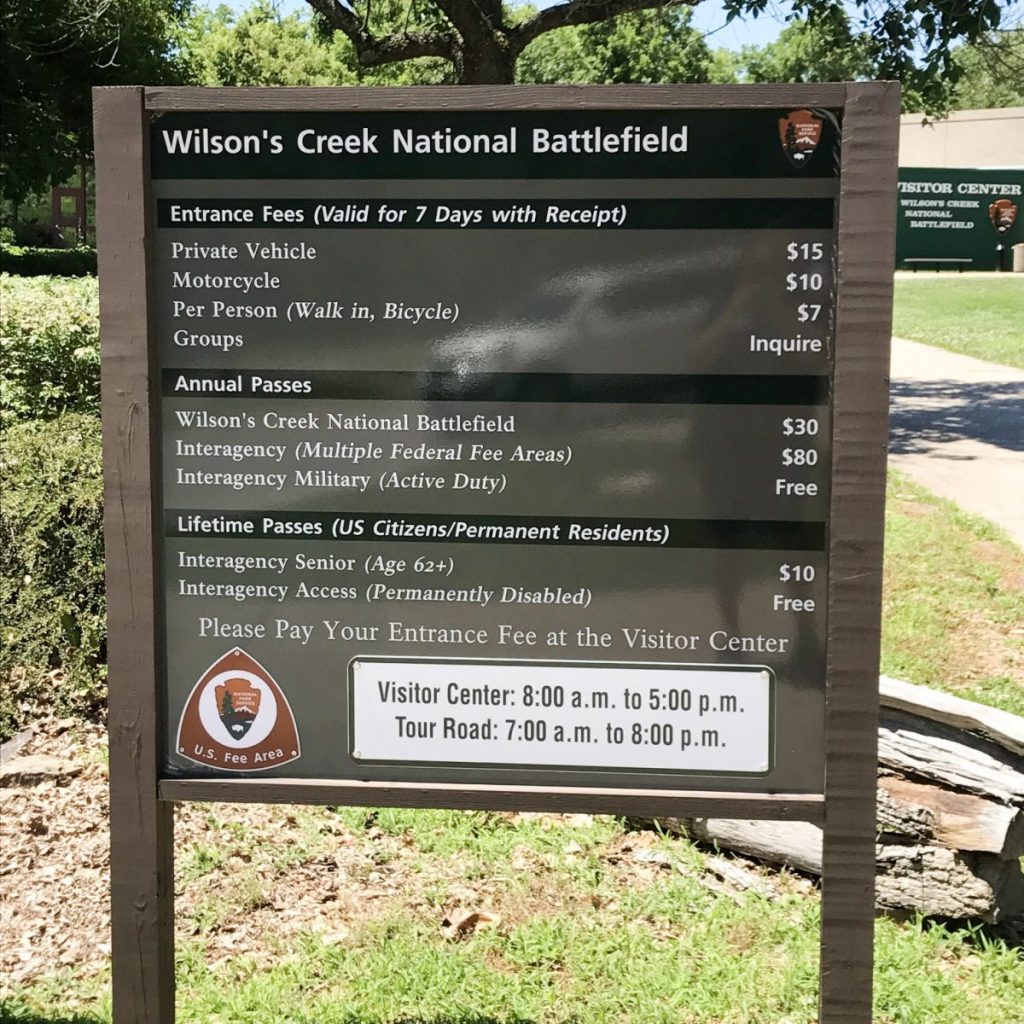 The park features a main paved loop that has interpretive stations that tell the story of Wilson’s Creek, the first Civil War battle west of the Mississippi River. Southerners would refer to the battle as the Battle of Oak Hills. This early battle occurred on August 10, 1861.

The parks also has several walking trails that branch off of the main road, and the park also offers a horseback riding trail, though it is BROH–bring your own horse.

Experiencing the Story of the Battle of Wilson’s Creek

The battle is named for the small river that passes through the area. In July of 1861, Brigadier General Nathaniel Lyon led a regiment to Springfield, Missouri, after securing Jefferson City from Governor Jackson and the Missouri State Guard who sided with the Confederates. Governor Jackson fled to Southwest Missouri, and troops from the Missouri State Guard, the Arkansas State Guard, and Confederate regiments formed a coalition under Major General Sterling Price, General Ben McCulloch, and General N.Bart Pierce. History often refers to this coalition as the Southerners since it included two state militias, not just Confederate regiments.

On August 1, Lyon led Union troops from Springfield towards the Southern forces. A few days later on August 6, the Southerners arrived at Wilson’s Creek and set up camp. The water source made it an ideal stopping place, though the Southerners intended to march on to Springfield.

Meanwhile, local people were quietly living their lives near Wilson’s Creek. Your tour of the battlefield begins by crossing Wilson’s Creek and passing Gibson’s Oatfield. The Gibson family had a mill and carded wool during this time. When the family heard the canons on the morning of August 10, they took shelter in their cellar. The structures are no longer standing, but you can see the foundations and Edgar Cemetery if you choose to take a walking trail. 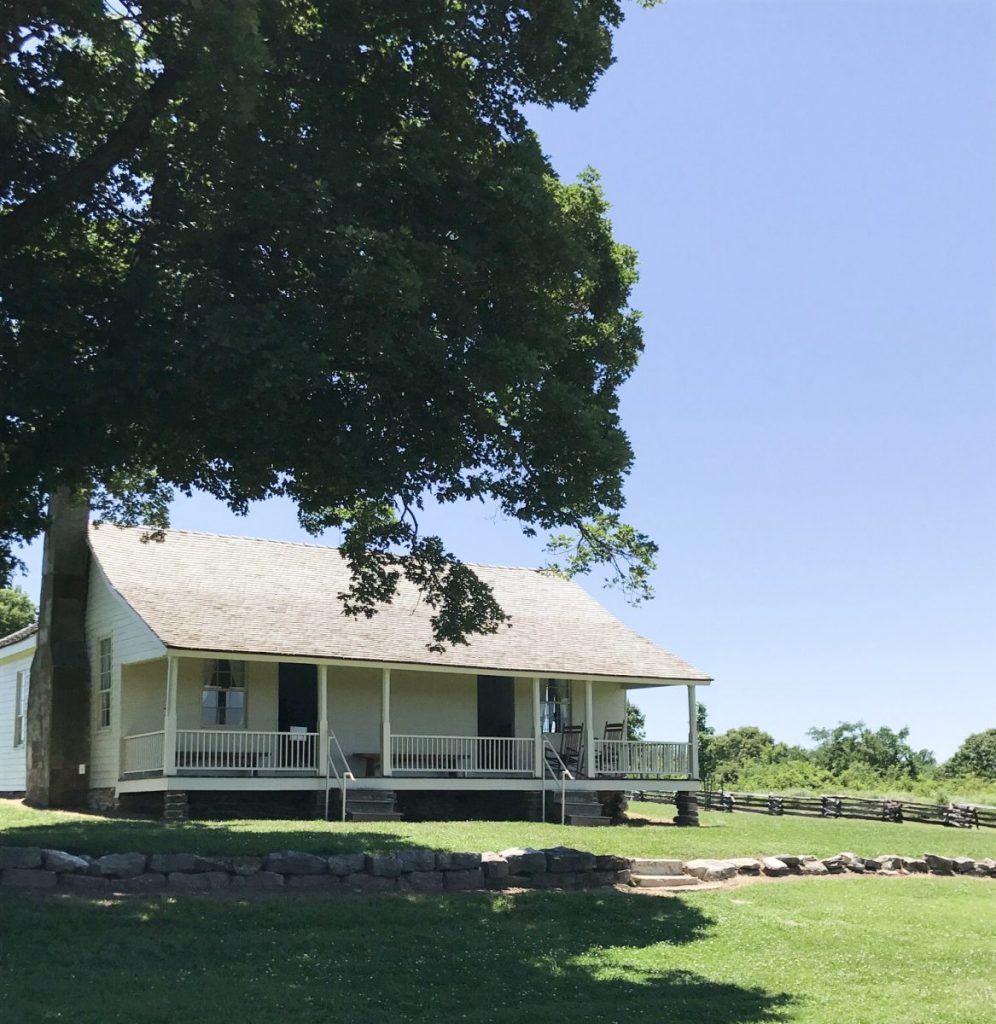 This is the only home still standing on the battlefield. In the 1840s, John Ray and his daughter Elizabeth moved to the area. John, a widower, married Roxanna Steele in 1849. Roxanna had four children from her previous marriage, and together, John and Roxanna had seven children. In 1851, John purchased the estate that belonged to Roxanna’s husband. The purchase included a house and two enslaved people. Later that year, John Ray bought the land and built the house known as the Ray House on the tour. They were successful farmers who farmed oats, wheat, corn, potatoes, and hay. They also had orchards, kept bees, and raised a variety of animals. You can still walk among apple trees near the house. 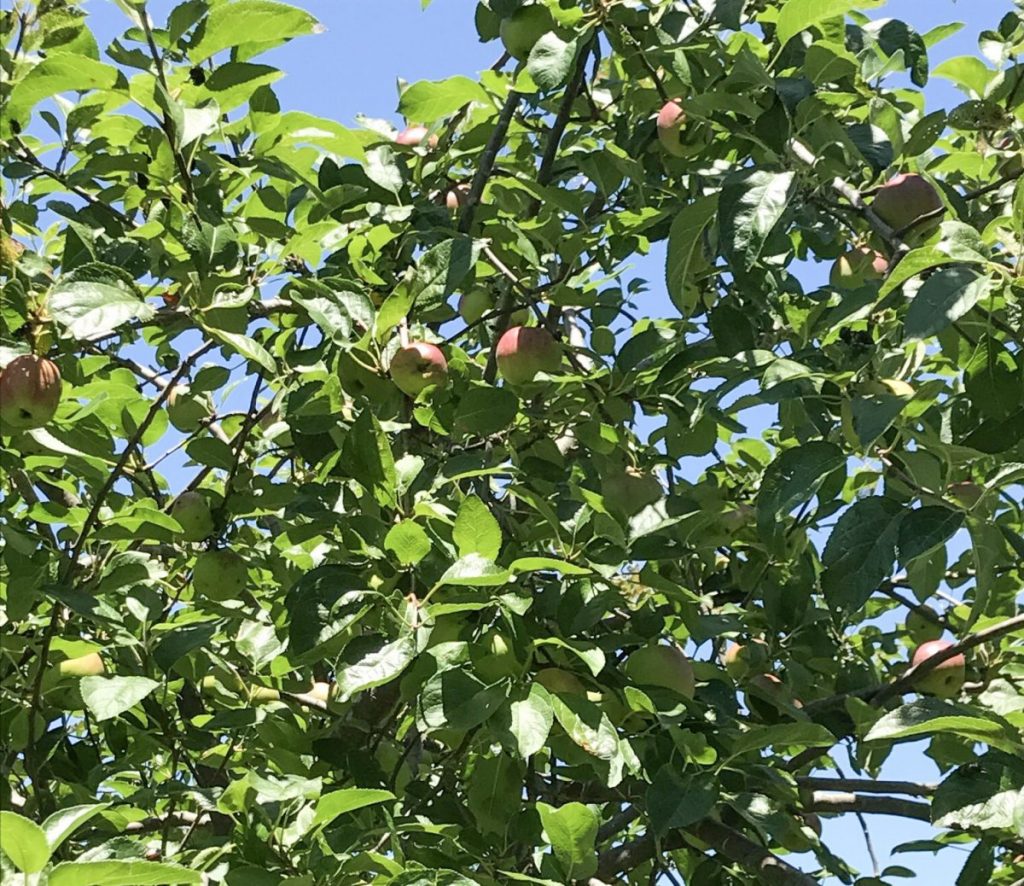 The Ray House is a great stop as you tour the battlefield. 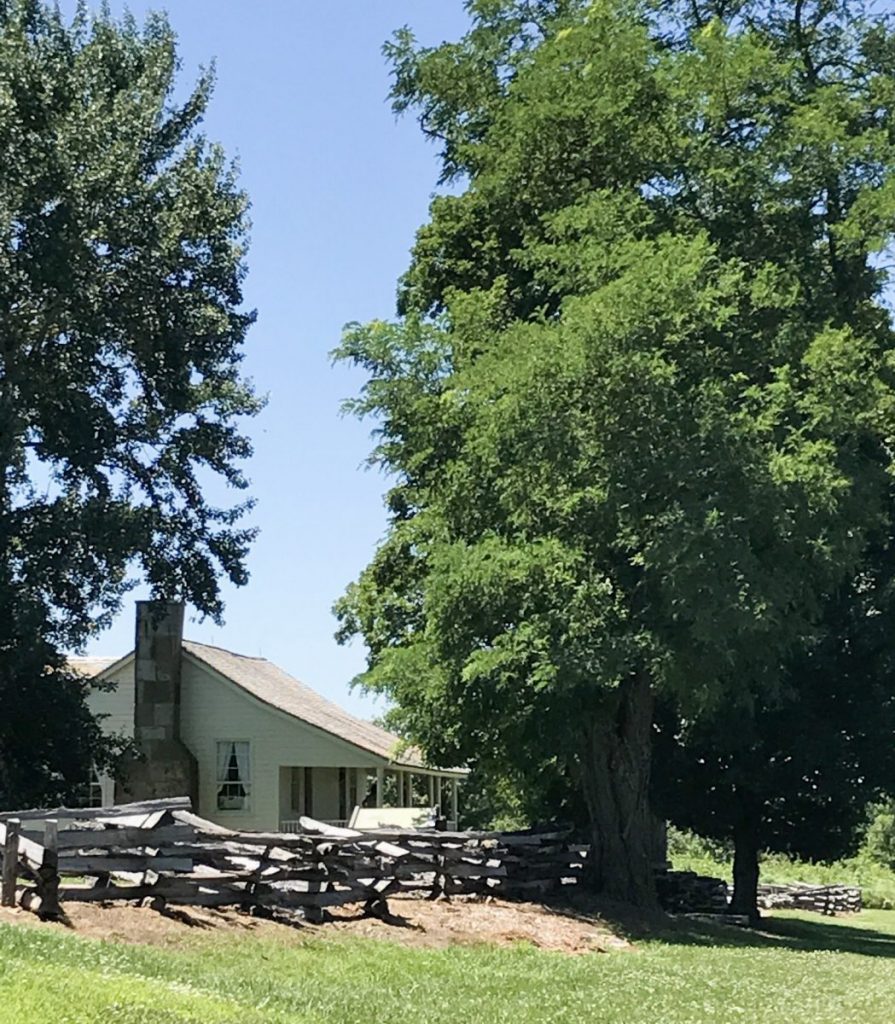 The Ray family is interesting, as well. John and Roxanna Ray were born in the South and owned two enslaved people. Still, just prior to the Civil War and during, John was a federal postmaster living along a telegraph road and their home was sometimes a stagecoach stop. The Ray family embodies a truth for Southwest Missouri during the Civil War–the Rays politics aligned with the Union though they had enslaved workers. Missouri was a border state, a state that could have gone either way in the conflict, especially early on.

When you arrive at the Ray House, be sure to take in all the details. 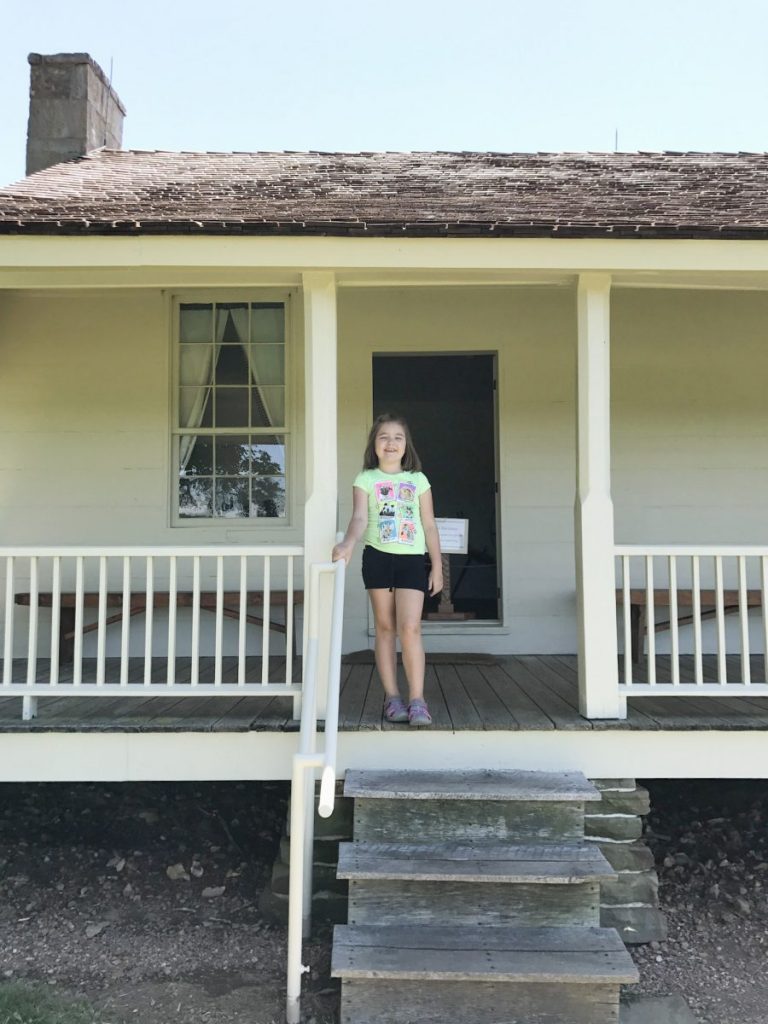 The home has replicas and artifacts to help you see what life was like for the Rays in the 1860s. 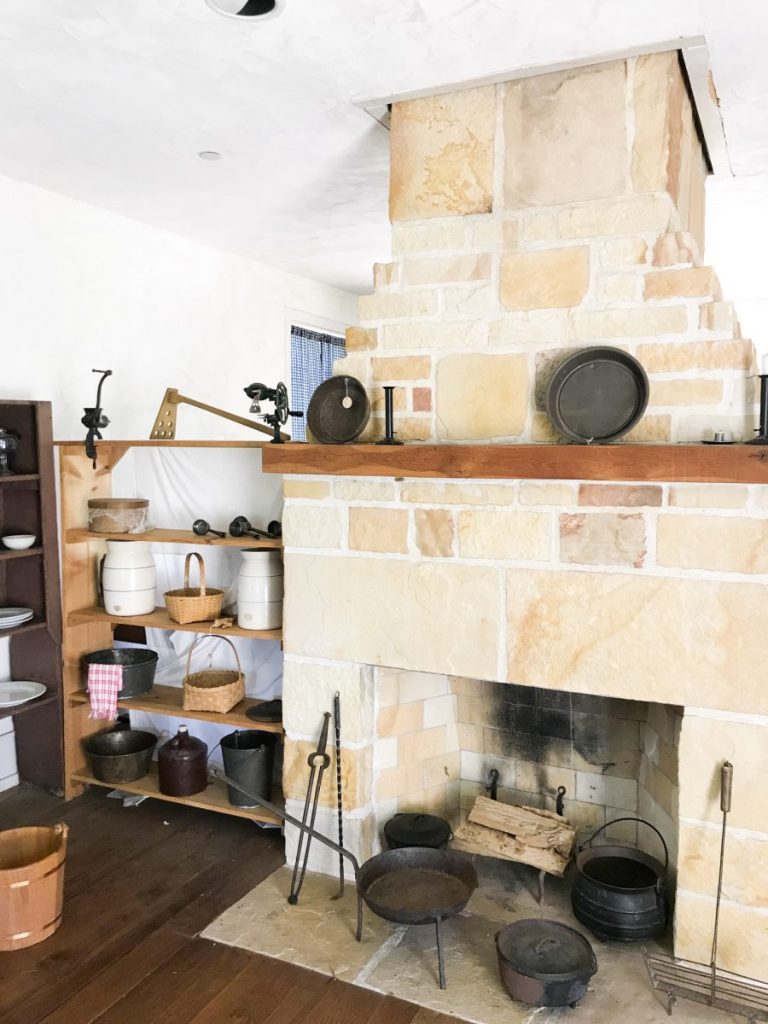 Here is a typical bed for the time. I love the rope mattress. 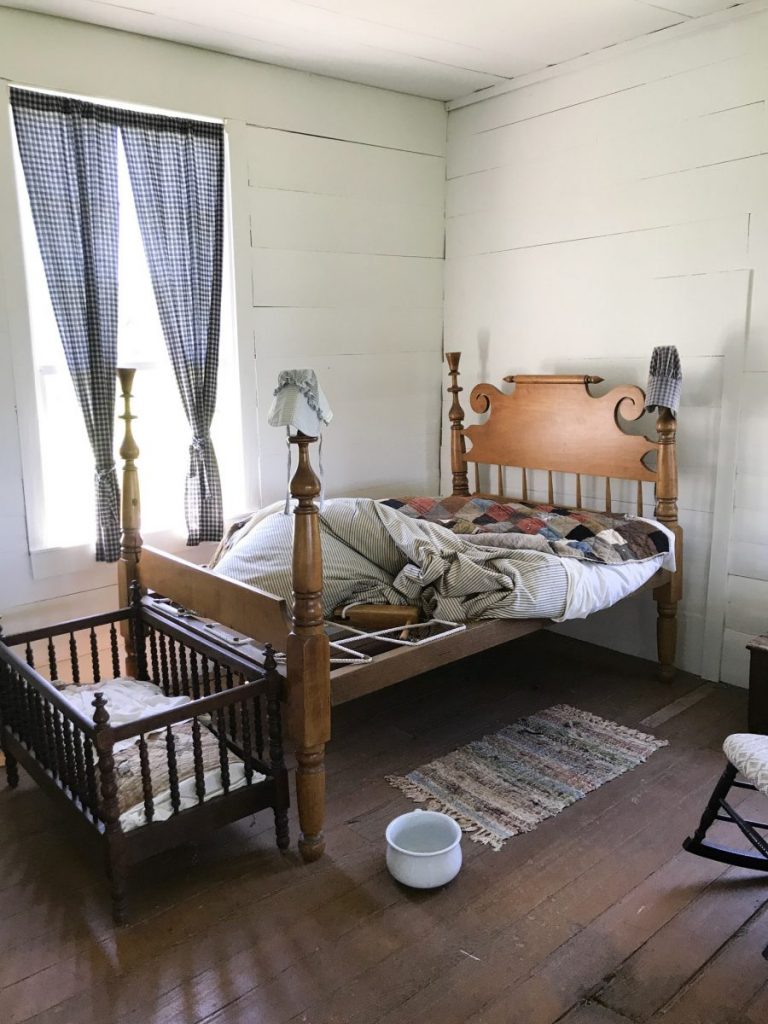 The Ray farm included sheep, so spinning wool was an activity of the home. 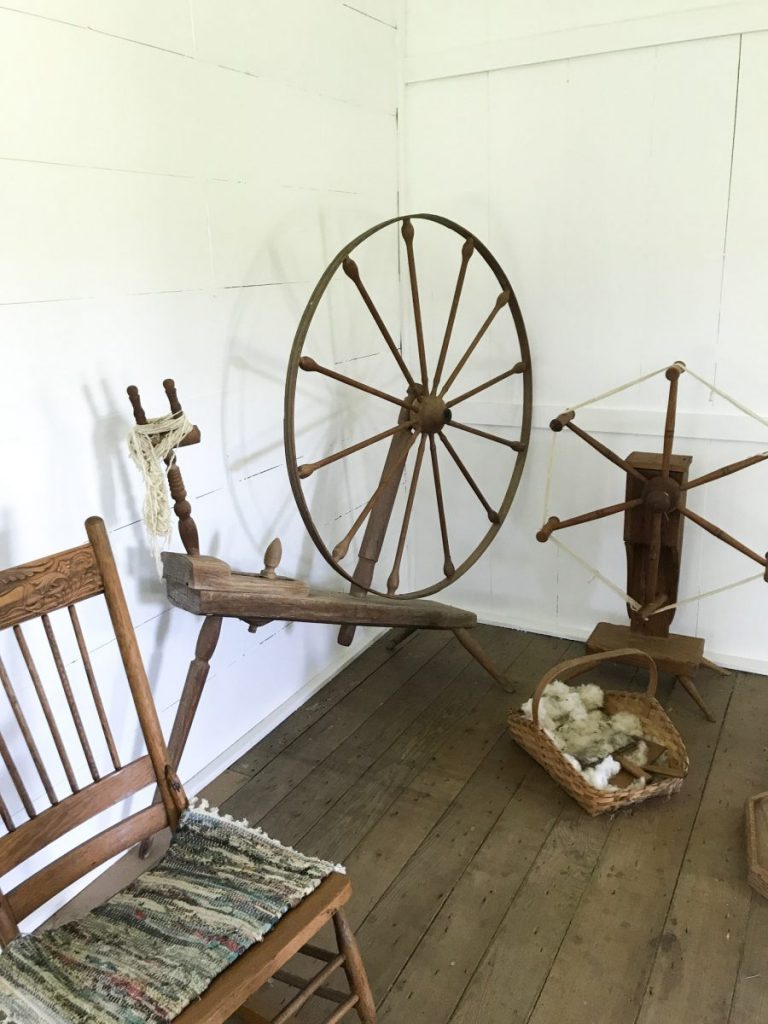 I love this pie safe. 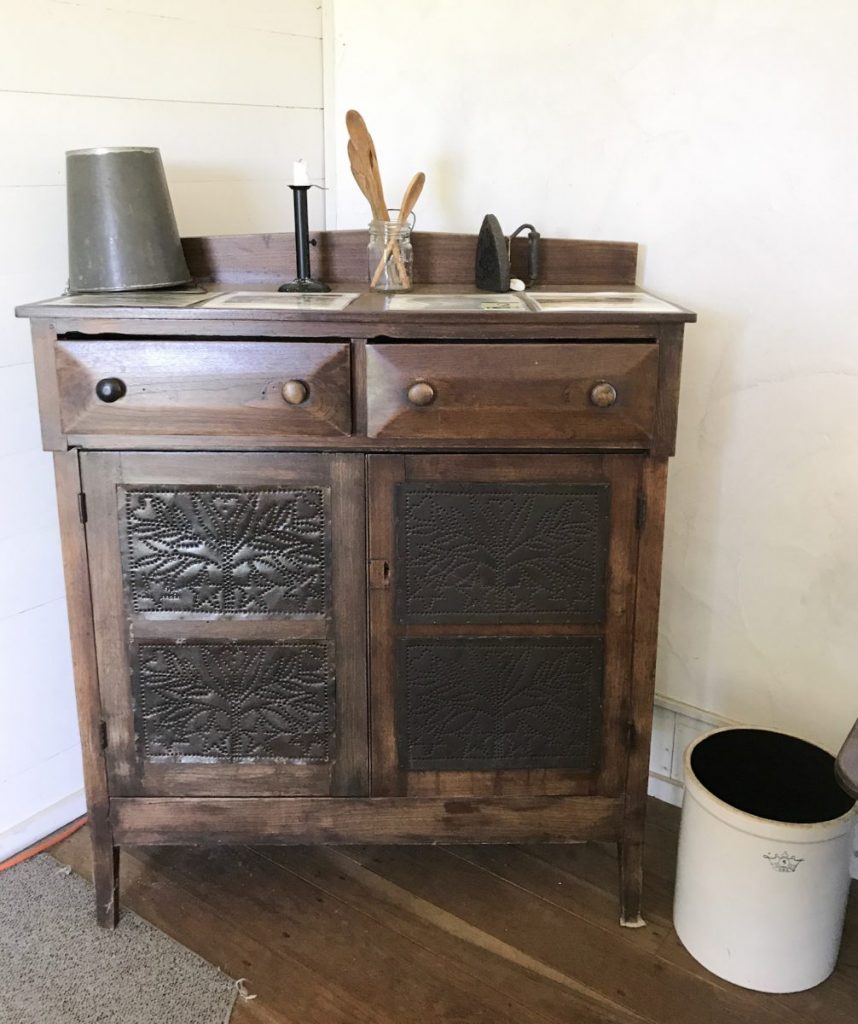 And here is the cellar. 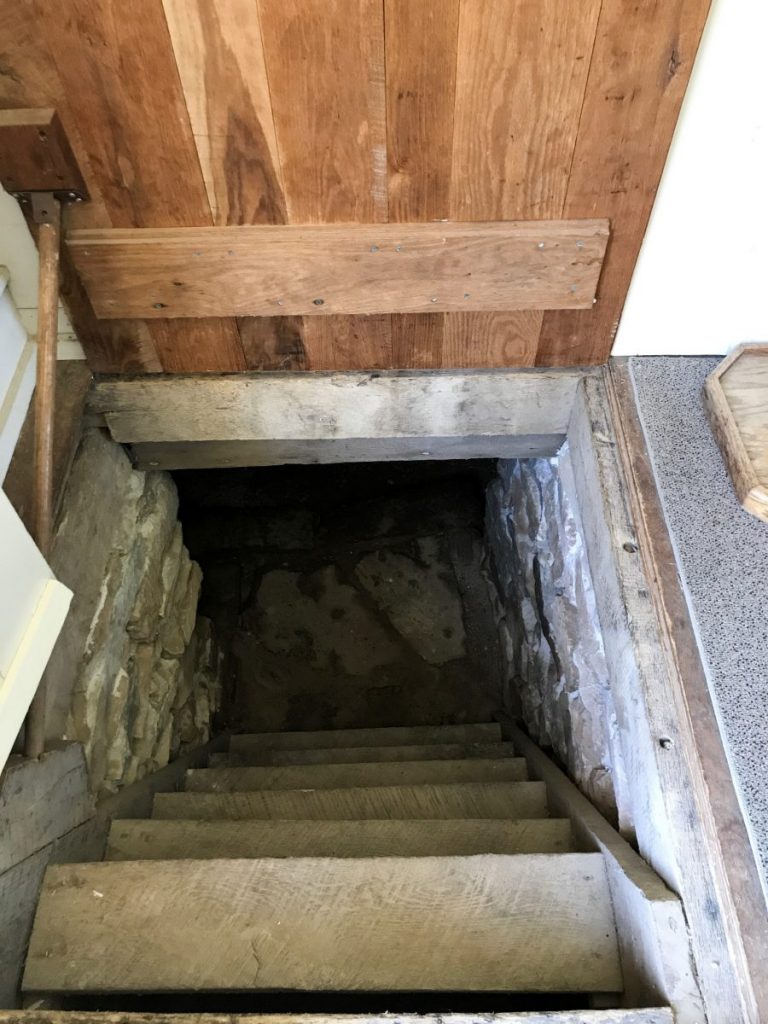 Keep your eyes open. Who knows what you’ll see? 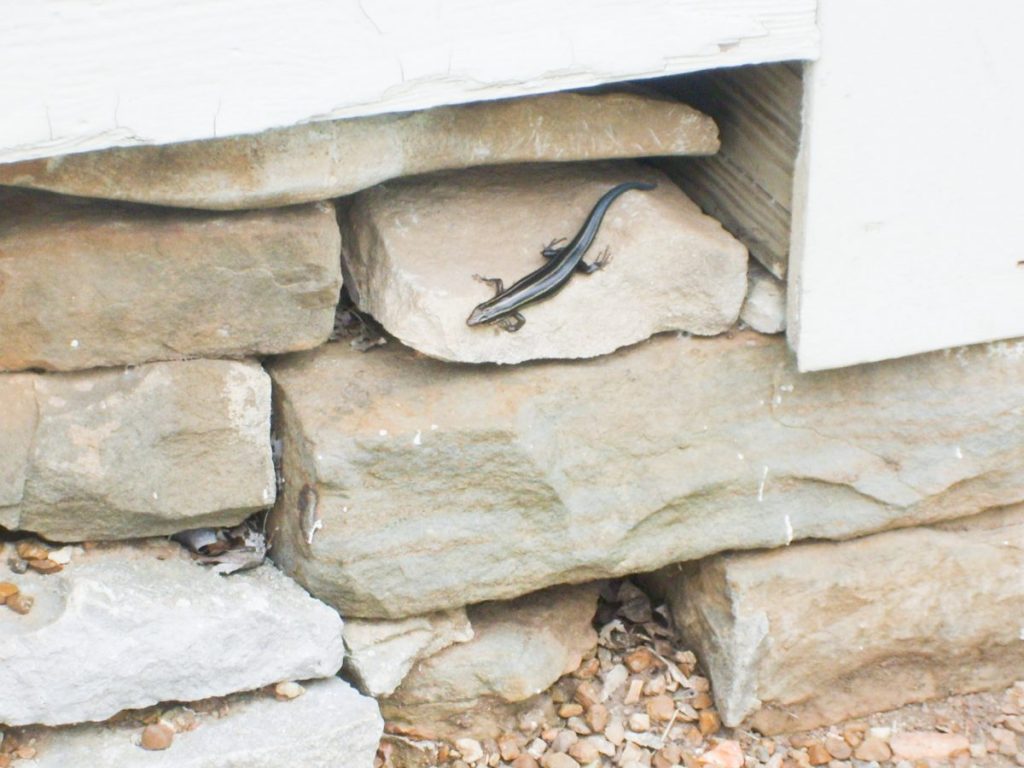 John watched the fighting from his cornfield. 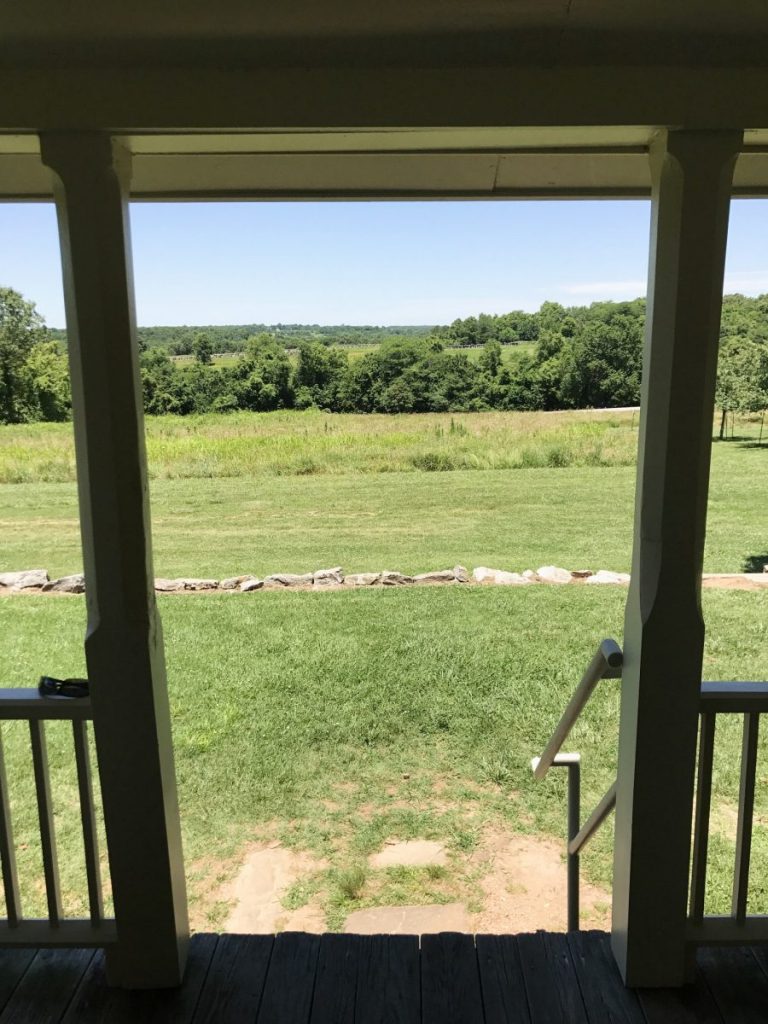 After the battle, the Ray House was used as a hospital. I can’t imagine the horrors the family experienced as the wounded were brought to the home.

After the Civil War ended, Aunt Rhoda moved to Springfield where she later married. 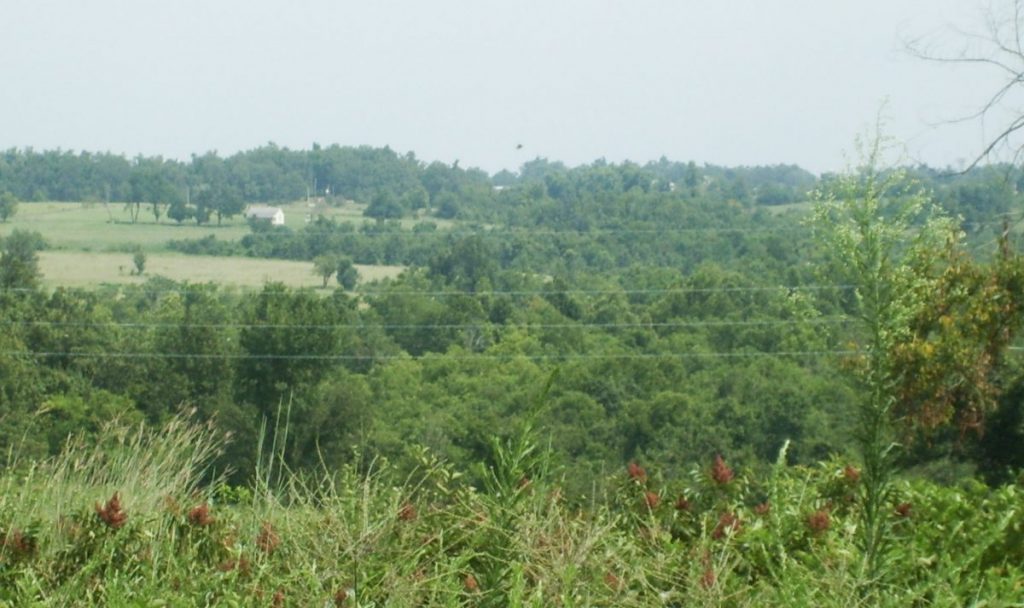 Early in the morning, General Lyon split his forces into two groups. Lyon led a bulk of the troops to attack from the north, and Colonel Franz Sigel flanked the Southerners from the south. Sigel had been successful at the Battle of Carthage just a month before.

Lyon was able to surprise the Southerners and gain the upper hand initially, even though General McCulloch had double the men that Lyon did. The Union troops took possession of a high place that would be known as Bloody Hill.

You can take a trail here that leads to the site of the Edwards cabin. This cabin served as General Price’s headquarters. Price was commander of the Missouri State Guard. 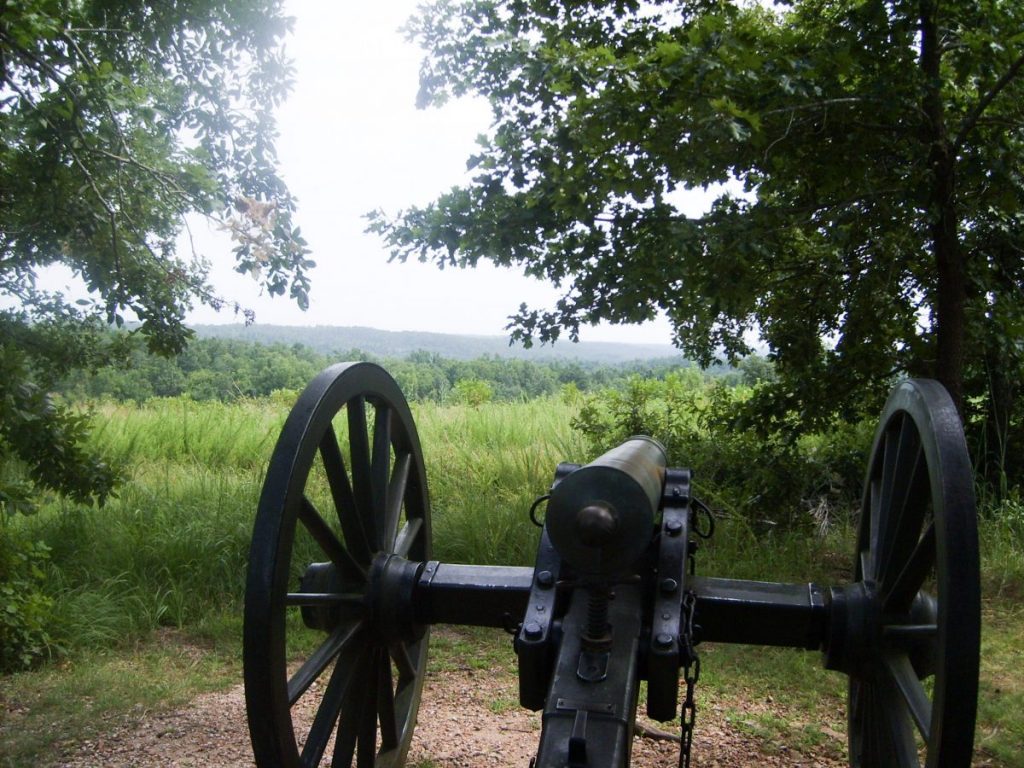 The battle continued for five hours that morning. Union and Southern forces continued to advance and retreat, taking and losing positions. Colonel Sigel was successful from his position at first, but General McCulloch was able to defeat him at the Sharp Farm.

At about 9:30 a.m., General Lyon was wounded for the third time, this time fatally. Lyon was the first Union general killed in the Civil War. Major Samuel Sturgis took command, but by 11:00 a.m., the Union troops, running low on ammunition, withdrew to Springfield. The Southerners won the day, but they were not in a position to follow the Union troops. Though the Union army lost, they were able to keep Missouri for the Union.

Still, the Southerners controlled Southwest Missouri until the following March. The Confederacy even admitted Missouri as the 12th state on November 28, 1861. The Battle of Pea Ridge, near Fayetteville, Arkansas, would be the Union victory that returned Missouri to full Union control, though the Confederate government of Missouri still continued in exile.

Totten’s Battery and the Route of Union Advance and Withdrawal 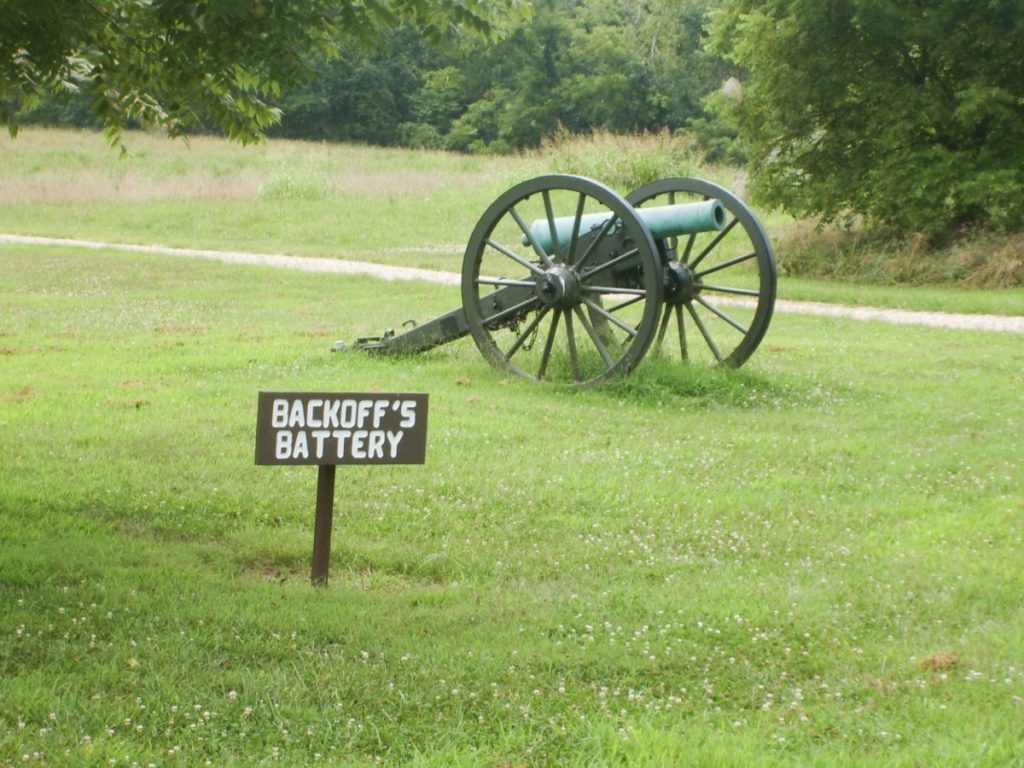 At the end of the battlefield loop, there are some battery locations where you’ll be able to see cannons positioned at various points. On some days, you can see volunteers demonstrating artillery and daily life. During one of our visits, we were lucky enough to see some of those volunteers. Be sure to check the official website calendar to see if any demonstrations will be happening while you’re there. 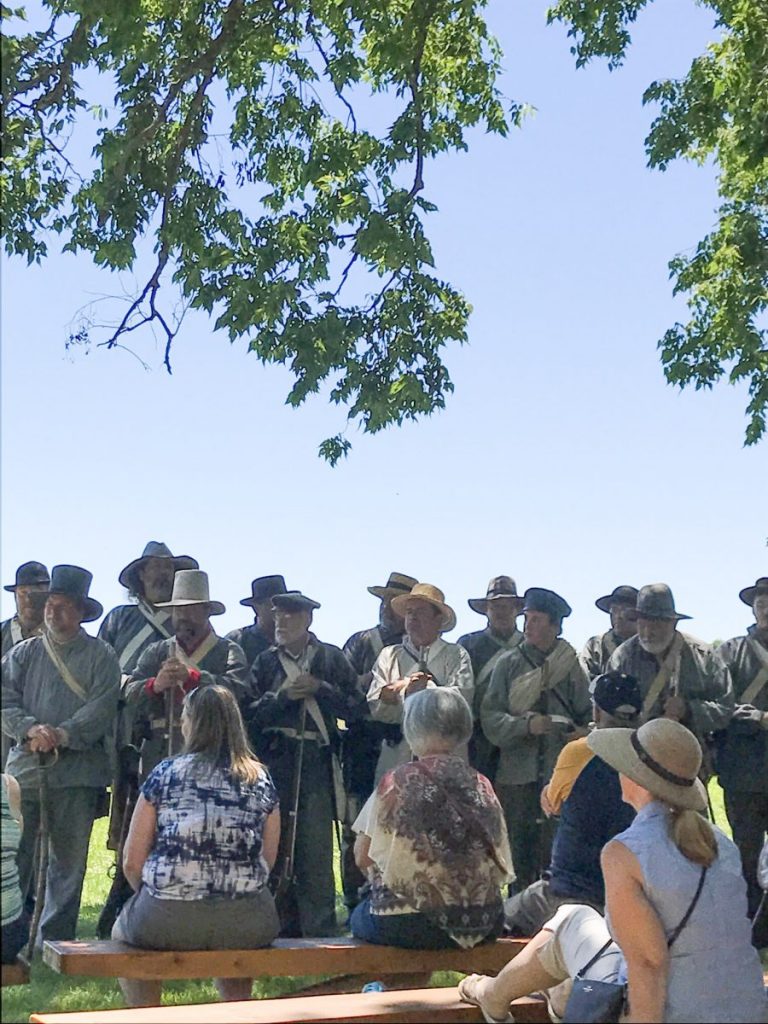 The presentations are worth checking out. 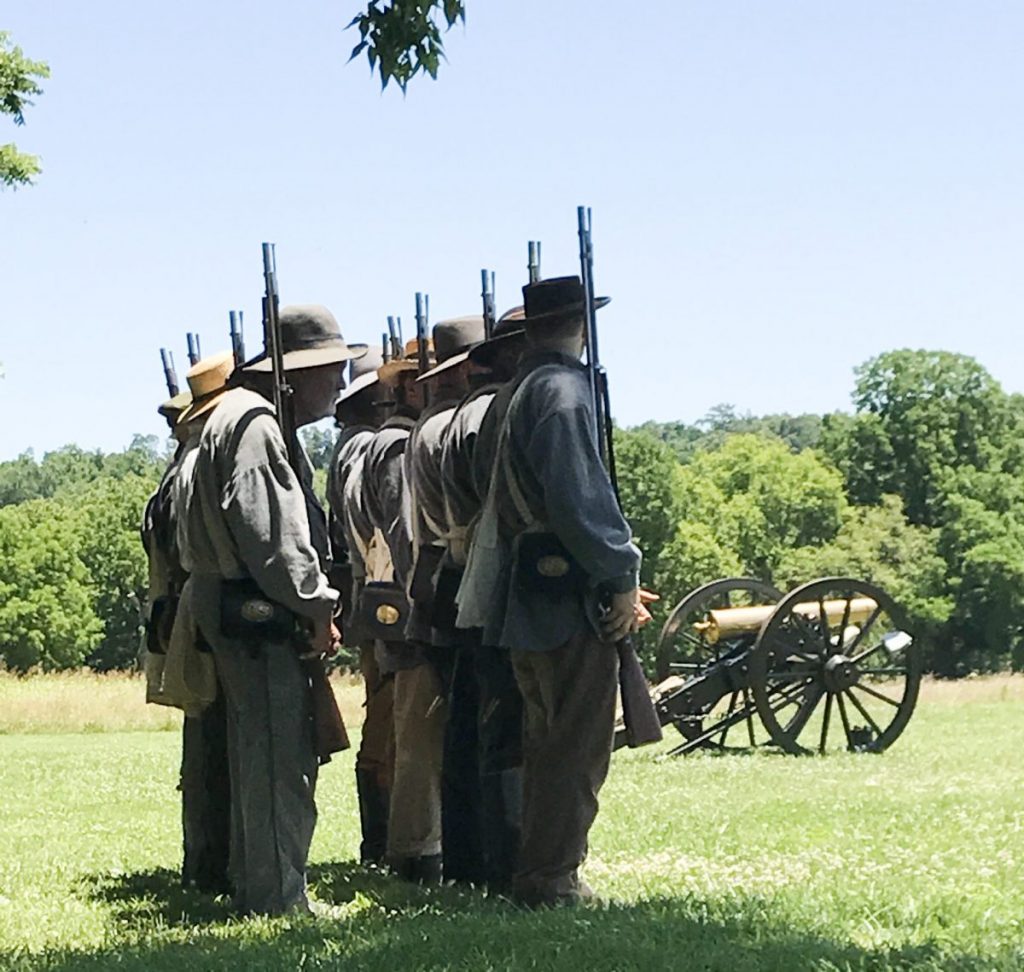 If you’re wondering about the uniforms, in this battle, the Union soldiers who were recruited by General Lyon in St. Louis wore gray shirts. Some of the other troops belonged to Iowa companies. Since the war had just begun a few months before, many soldiers supplemented any uniforms they may have had with civilian pieces as needed. So, though we’ve associated gray with the Confederates, this company is Union. 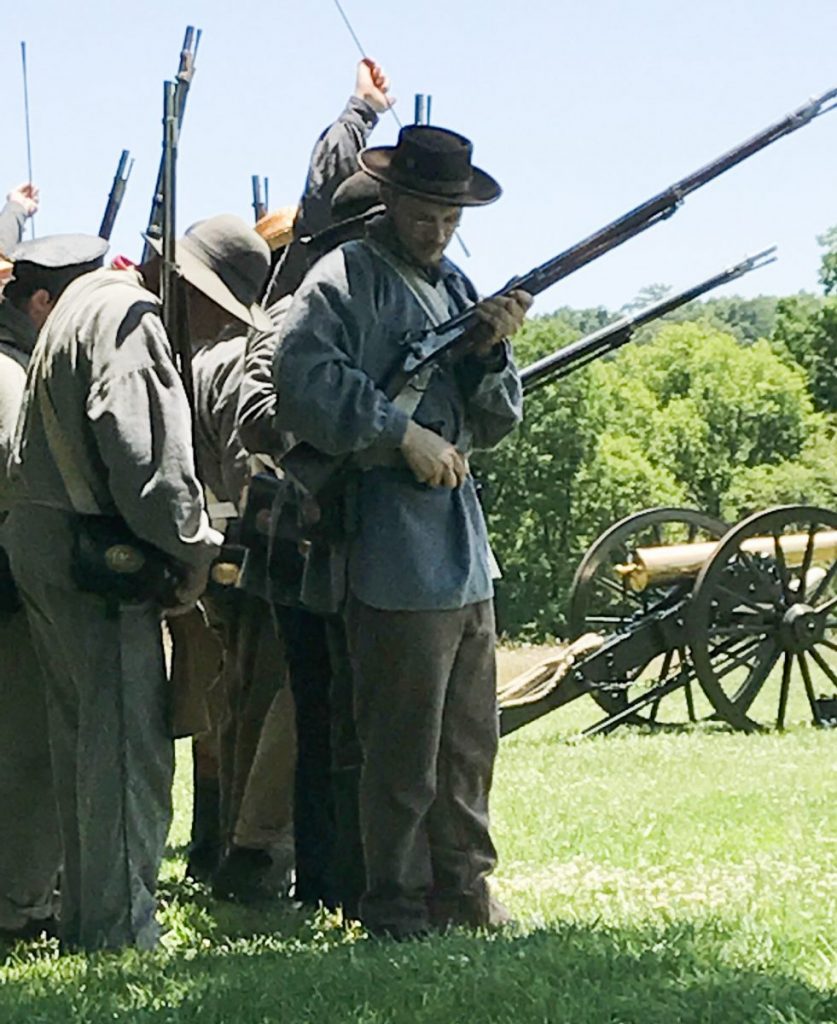 Interestingly, many of Lyon’s troops were born in Germany.  They’d immigrated to the United States, and many of them had valuable military knowledge. Many Germans believed that the South possessed traits of the aristocracy that they’d left behind in Germany. Also, many of the men fought for the life that most Americans aspire to–freedom and the ability to build the life of their dreams. The military could, perhaps, help with those endeavors. 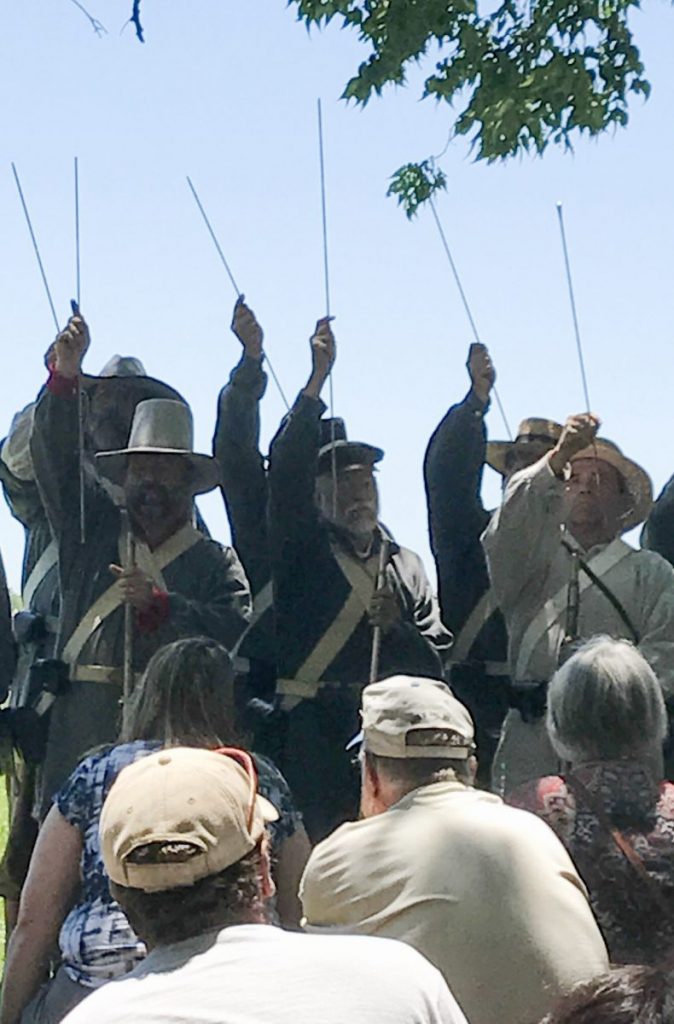 I especially loved the fife and drum team. The demonstration included the sounds made by the instruments and how they used those to communicate on the battlefield. 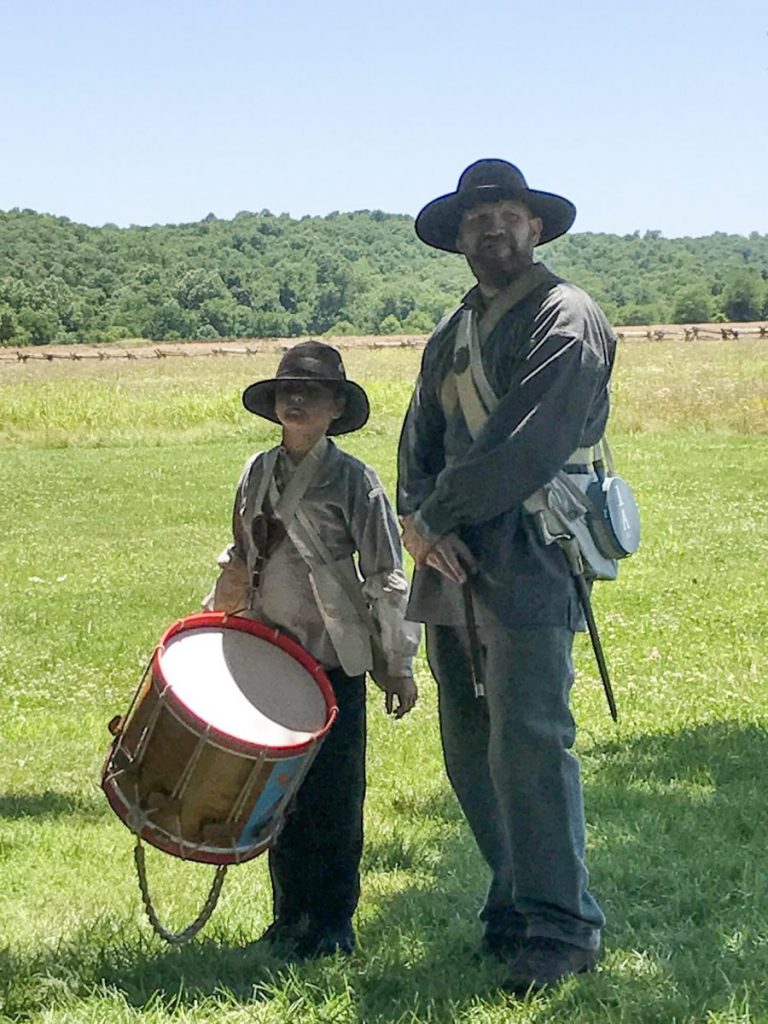 Here is their camp. It’d be pretty cool to stay all night on the battlefield. 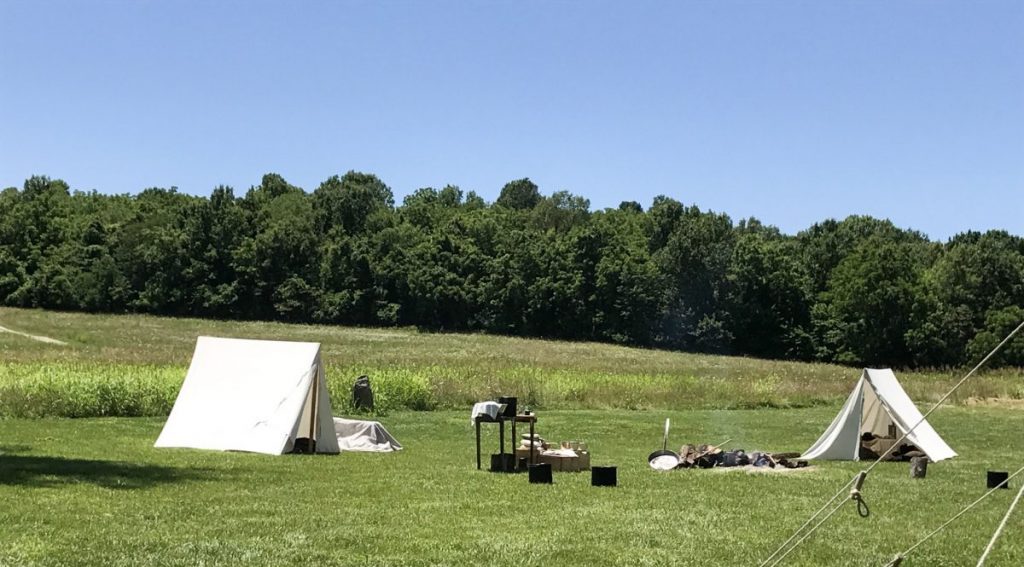 During the battle, the Ray House and other homes in the area became designated as hospitals. Temporary field hospitals were also set up. After the battle, surgeons cared for both Southerners and Union soldiers who were too critical to make the journey of retreat. Many churches, public buildings, and private homes in Springfield also served as hospitals.

After the battle, General Lyon’s body was taken to the Ray House before it was transferred to Springfield. Lyon’s body remained in Springfield until his family could retrieve his body and bury him in Connecticut. Roxanna provided the cloth that covered his body. In addition to their home suddenly becoming a war hospital, the Ray family also lost most of their livestock and crops to the battle and soldiers’ looting.

Since the Union troops retreated, the Southerners were tasked with burying dead. Most of the deaths occurred near Bloody Hill, and many were buried quickly in mass graves. In 1867, the Springfield National Cemetery was established, and the Union soldiers were moved there. Later, in 1871, the Southerners were moved to an adjacent plot of land designated specifically for the Confederates. Sadly, few of the soldiers from both sides were identified.

Both plots now comprise the Springfield National Cemetery, and soldiers from other wars and conflicts are now also buried there. If you choose to visit, you can see the monument to Lyon as well as monuments to Union and Confederate soldiers.

I hope you get a chance to explore Wilson’s Creek National Battlefield. My family loves checking out historic sites when we travel, and we’re certainly interested in the Civil War. Click here to read about our visit to Gettysburg. We also toured with a licensed guide on that trip. Click here to read more about our wonderful experience! If you’re interested in a trip to visit the hometown of Abraham Lincoln, click here. This is a great place to get kids started with Civil War history.

Here are my sources to help me with the battle details.

“A Brief Account of the Battle of Wilson’s Creek.” National Parks Service, U.S. Department of the Interior, 10 Apr. 2015,             www.nps.gov/wicr/learn/historyculture/brief-account-of-the-battle.htm. 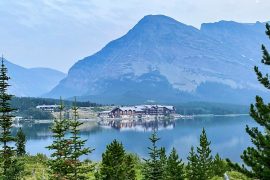 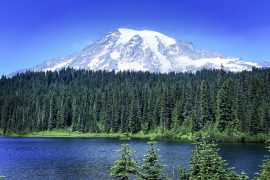 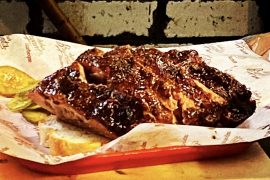